Will they now try to push him under a bus?

This article is over 22 years, 1 months old
ANYONE WHO watched Panorama on BBC1 on Monday night could not fail to realise that Blair's entire election machine is being deployed to stitch up Ken Livingstone. Every dirty trick in the book is being used to ensure Blair's man, Frank Dobson, becomes Labour's candidate for mayor of London.
Downloading PDF. Please wait...
Saturday 18 December 1999

ANYONE WHO watched Panorama on BBC1 on Monday night could not fail to realise that Blair’s entire election machine is being deployed to stitch up Ken Livingstone. Every dirty trick in the book is being used to ensure Blair’s man, Frank Dobson, becomes Labour’s candidate for mayor of London.

The programme showed how the electoral college voting system was designed to favour Dobson. It also confirmed that Labour Party membership lists were secretly supplied to Dobson while the other candidates were denied them.

All the cheating and fixing appears to be too much for Dobson. The press is claiming that he is suffering from depression. There may well be some truth in the rumour. Time and again he has failed to turn up at mayoral hustings meetings he has agreed to speak at.

But Dobson is far from finished. He is more than prepared to address meetings of unions such as the CWU and the GMB where he has a chance of picking up votes. Only a few weeks ago Dobson spoke at a 3am meeting at Mount Pleasant sorting office, one of the biggest post offices in London.

Dobson has also spent the last few weeks distancing himself from Blair and his coterie. On the Panorama programme he said, ‘I don’t welcome his [Blair’s] people getting involved in my campaign.’ Dobson understands that he has to address people’s real concerns if he is going to win this election. He no longer talks in his speeches about his close relationship with 10 Downing Street. Now he is much more likely to be discussing eradicating poverty in London and the horrors of homelessness.

No one should be fooled by Dobson’s rhetoric. He backs Blair’s agenda all the way. He promoted PFI schemes in the NHS when he was Labour’s health secretary. The final weapon in Dobson’s armoury has been the massive London Labour Party rallies addressed by Blair. At these rallies Blair has made it clear he wants Livingstone defeated.

Despite all the slurs and slander, Livingstone still remains miles ahead in the opinion polls. The reason is simple-people are desperate to see an alternative to Blair’s pro-business policies. An ICM opinion poll conducted last week asked Livingstone supporters, ‘Why will you be voting for Ken Livingstone?’ The five most popular answers were:

Mike Rosen: Dealing with the Nazis 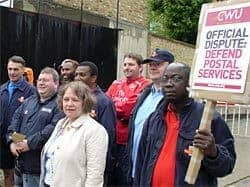 This is a very political war