You can’t beat the BNP by taking up their racism

This article is over 11 years, 8 months old
Some commentators have claimed that mainstream politicians being "tough" and "open" on immigration was the reason that the British National Party (BNP) had a terrible general election.
By Mark L Thomas
Downloading PDF. Please wait...
Tuesday 11 May 2010

Some commentators have claimed that mainstream politicians being “tough” and “open” on immigration was the reason that the British National Party (BNP) had a terrible general election.

Every anti-fascist should cheer as the BNP reels from the major blow it suffered.

But the argument that it was a willingness to talk about people’s “legitimate fears” over immigration that lanced the boil of the BNP’s appeal is wrong. To accept it would prove very dangerous for the future.

The idea that there has been a conspiracy of silence over immigration is a myth.

The barrage of headlines in the media over the issue has been relentless – over asylum seekers, migrants from the European Union and elsewhere. Politicians have pandered to attacks on migrants, and competed to be the toughest in clamping down on “illegal” immigrants.

This has injected a toxic atmosphere of scapegoating into British politics. Together with vicious Islamophobia, this has played a central role in fuelling the rise of the BNP.

In the election debates, Gordon Brown promised, “When it comes to immigration I want to see a situation where we increase the number of jobs that people in Britain can take, as we lower the number of people coming into the country.”

Brown’s language was relatively restrained compared to some, but the message was unmistakable – immigrants are taking your job. It was Brown who launched the poisonous slogan, “British jobs for British workers” at the 2007 Labour Party conference.

This is why he found it impossible to patiently rebut the claims of Gillian Duffy about eastern European immigrants taking jobs and overburdening services.

She was only repeating what the press and politicians have been saying so forcefully.

Some local Labour campaigns took Brown’s lead as a signal to promote much uglier language. For instance, Burnley Labour Party put out a leaflet headlined, “Stop the Amnesty for Illegal Immigrants”, saying they would “take our jobs”. It ends “If you vote for any other party – you’ll risk getting more illegal immigrants in Burnley.”

Far from undermining the BNP, such arguments lend credibility to the Nazis’ vile claims. All evidence from history is that racism is fuelled rather than exhausted by concessions.

After all, if immigrants cause unemployment, why not stop all future immigration? Why not start kicking out existing immigrants? Why not their descendants?

The logic is unavoidable once you accept this false argument. In reality there is no link between immigration and unemployment. Unemployment caused when capitalists don’t find it profitable to employ more people.

Pandering to the BNP’s arguments simply helps make them respectable, as does interviewing them endlessly on TV and radio. It offers the Nazis a route out of political isolation into the mainstream.

This explains how the BNP received over half a million votes last week. But the reason its councillors were kicked out of office across the country was that large numbers of people saw them as the Nazis that they are.

This was the central message of Unite Against Fascism’s campaign. It drove a wedge between the harder core of BNP support and those holding softer racist ideas who might have been tempted to vote BNP.

It also sent an urgent message to the

anti-fascist majority. Many then decided to hold their nose and vote Labour to stop the BNP.

You can’t use racism to defeat the Nazis. If you do, it feeds the poison the BNP thrives on. More attacks on immigrants would help the BNP’s fortunes to revive. Far from splitting softer racists away from the Nazis, pandering to scapegoating pushes the two groups together.

The anti-immigrant rhetoric that was ramped up during the election period points to one of the key tasks for socialists. That is to confront and explode the myths about immigration.

Many activists did this during the campaign – but it will require a renewed effort in the next few months to succeed.

War at heart of the system 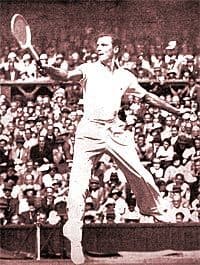 Fred Perry: the radical of Wimbledon