This article is over 9 years, 7 months old
The Building Workers Charter had been formed in 1970 and the paper soon had a sale of tens of thousands on the sites, with a much wider circulation.
By Gerry Kelly
Downloading PDF. Please wait...
Tuesday 05 June 2012

The Building Workers Charter had been formed in 1970 and the paper soon had a sale of tens of thousands on the sites, with a much wider circulation.

Its main demands were £1 an hour basic rate, a 35 hour week and the end of the lump.

Its leadership was largely Communist Party (CP), though I and other members of the International Socialists (IS)became involved. The IS were the forerunners of the Socialist Workers Party.

Local groups were set up and its editorial board was composed of delegates from these groups.

The Charter was the major influence in forcing and then spreading the strike. But when the strike got underway the Charter stopped publishing.

There was no national meeting to direct tactics and strategy. There were not even local Charter group meetings during the whole 13 weeks.

Some CP activists, like Pete Carter, Mick Shilvock and Phil Beyer in Birmingham were well to the left and I worked closely with them.

Others almost saw their job as done when the national strike was called.

So although the strike had been brought about and spread by pressure from below, the means to mobilise independently wasn’t there when the strike was sold out.

Although the IS initiated the Building Worker and tried to organise groups of militants around it, our numbers were few compared to the CP and our influence limited.

With the absence of the Charter, Socialist Worker stepped into the breach.

During the strike many militants, including some in the CP welcomed the SW Building Worker specials as a way of giving strikers a voice independent of the officials.

The failure of the Charter to maintain rank and file organisation during the strike allowed the Ucatt leadership to end the strike when building bosses were on their knees.

The back to work order was announced on television and the organisation to defy it was simply not there.

The 1972 strike is a lesson in how to build a rank file movement, but also in the dangers of allowing such a movement to see its role merely as one of forcing officials to the left.

This approach ultimately disarmed the rank and file instead of empowering it.

After the strike the National Federation of Building Trade Employers, in cahoots with the blacklisting organisation The Economic League, issued a document titled “Violence and Intimidation in the Building Industry Dispute”.

It recounted incidents where violence was supposed to have occurred as well to arrests for peaceful picketing.

In 1973, at Shrewsbury Crown Court, three were jailed on trumped up charges.

A campaign to clear the names of the 24 recently brought the case to the Criminal Cases Review Commission.

There was also a trial in Birmingham of five building workers, including myself, for conspiracy.

All five of us were cleared.

Many workers were blacklisted because of union activities and many of us have now found out that files were kept on us on a database for almost 40 years. 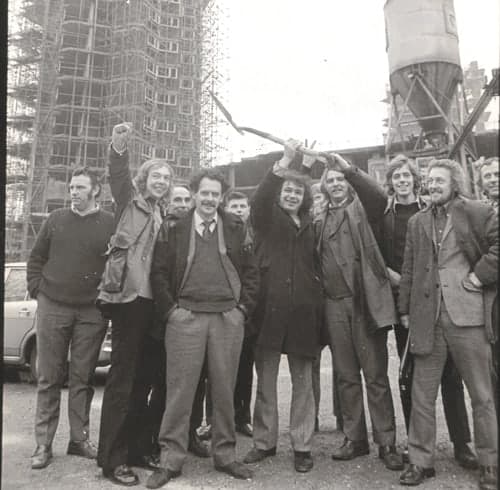 Building pickets - 1972 and the revolt of workers