This article is over 14 years, 9 months old
John Riddell, the pre-eminent historian of the Communist Third International, continues his series, by looking at the origins of the International. The series started with a prologue on the 1907 Stuttgart conference in Germany.
Downloading PDF. Please wait...
Tuesday 25 September 2007

During the upsurge of working class and liberation struggles that followed the 1917 Russian Revolution, socialists from all continents joined in founding a world party, the Communist International, or “Comintern”.

The new International gave living expression to socialism’s guiding concept, “Working people of all countries, unite.” After Lenin’s death, the International was effectively destroyed by the rise of Stalinism.

But the International’s early congresses adopted the programmatic foundation on which revolutionary socialism stands today: on the united front, work in trade unions, liberation struggles of the oppressed, the nature of workers’ rule, and more.

The Comintern was born from the ashes of the previous, “Second” International, which collapsed at the outbreak of the First World War in 1914.

Abandoning their pledges of anti-war resistance, leaders of socialist parties in most warring states rushed to support the war efforts of their ruling classes, promoting a slaughter that was to claim 20 million lives.

Only a small minority held to the Second International’s anti-war stance. But as the war progressed this minority drew strength from strikes, soldiers’ and sailors’ protests, and demonstrations in all warring countries.

In 1915, 42 anti-war socialists from 12 countries, meeting in Zimmerwald, Switzerland, adopted a historic statement that was to inspire anti-war protests in all the warring countries.

The Zimmerwald Manifesto called for an international fight for peace, based on self-determination of nations and without annexations or indemnities. A minority current at Zimmerwald, led by the Bolshevik Party of Russia, asked the conference to go further.

Noting that the war was plunging European society into crisis, it called for revolutionary struggle against the capitalist governments under the banner of socialism. This current also favoured a “ruthless struggle” against opportunist forces in socialist parties whose pro-war stand had betrayed the workers’ movement.

Known as the Zimmerwald Left, it was the embryo of the future Communist International.

The Zimmerwald Left’s strategy was soon vindicated. Worker-soldier revolutions in Russia in 1917 and Germany in 1918 overthrew their governments and forced an end to the war. In Russia, workers, soldiers and peasants formed a revolutionary government based on their councils, or “soviets”.

Across much of Europe, masses of workers turned away from their opportunist leaders and sought to follow the Russian example.

Lenin captured the spirit of the moment in his April 1919 assessment of the Comintern’s foundation: “A new era in world history has begun. Mankind is throwing off … capitalist, or wage, slavery…. Man is for the first time advancing to real freedom.”

It was not easy for the revolutionary wing of world socialism to meet. A capitalist blockade barred travel to the young soviet republic.

But after the German revolution, and the formation of the German Communist Party under the leadership of Rosa Luxemburg and Karl Liebknecht in December 1918, Bolshevik leaders felt it was urgent to convene an international congress, even if it was small.

Fifty one delegates – only nine from outside Russia – met in Moscow on 2-6 March. They represented 22 countries. Two thirds of the delegates were under 40 years old, and one fifth of them represented Asian peoples.

Against objections by the German delegate, who considered the move premature, the congress launched the Communist or Third International.

The central challenge before the congress was to clarify the example represented by the soviet government in Russia.

At a moment when invading imperialist and counter-revolutionary armies placed the soviets’ survival in question, Lenin proposed to the congress some theses explaining the nature and potential of soviet power.

Its substance, he said, “is that the permanent and only foundation of state power, the entire machinery of state, is the mass-scale organisation of the classes oppressed by capitalism”.

Soviet power “is so organised as to bring the working people close to the machinery of government”.

That is why the component councils are based on the workplace, not a territory. Working people’s mass organisations are enlisted in “constant and unfailing participation in the administration of the state”.

Barriers to democracy such as the capitalist military, bureaucratic and judicial machinery are broken up.

Enemies of the soviet regime attacked it as dictatorial.

It is indeed a dictatorship, Lenin affirmed, a temporary one against the forcible resistance of the exploiting class, which is “desperate”, “furious”, and “stops at nothing”.

To the masses oppressed by capitalism, however, it “provides an unparalleled extension of the actual enjoyment of democracy”. Capitalist “democracy”, by contrast, “is no more than a machine… for the suppression of the working people by a handful of capitalists”.

Reality in the besieged soviet republic necessarily fell short of the soviets’ potential, and the Bolsheviks recognised, as Lenin stated in July 1918, that victory over capitalism required “the joint effort of the workers of the world”.

The purpose of the International was to “facilitate and hasten” that world victory, a task in which working people inside and outside soviet territory had an equal stake.

This victory required breaking from and exposing the “social chauvinist current” – social democrats who had supported the imperialist war and, after the war, helped repress workers in order to rebuild the capitalist state.

The International also criticised those who favoured reuniting chauvinists and revolutionaries in a single movement.

However, the congress proposed a bloc with revolutionary forces that previously stood outside the socialist movement but now had been won to the banner of soviet power.

The resolutions of the Communist International’s founding congress were far from comprehensive. Very little was said on colonial liberation, and only a few brief paragraphs on the oppression of women. Its main achievement lay in hoisting the banner of the new movement.

In the three months following the founding congress, mass workers’ parties in Italy, Norway, Sweden, and Bulgaria joined the International, while parties in Germany, France, and Britain opened negotiations to join.

On the International’s first anniversary, in March 1920, Lenin was able to say, “The Communist International has been successful beyond all expectation.”

John Riddell has edited a six volume series of documents, The Communist International in Lenin’s Time, published by Pathfinder Press. He edits the Canadian publication Socialist Voice. His books are available from Bookmarks, the socialist bookshop. Phone 020 7637 1848 or go to » www.bookmarks.uk.com 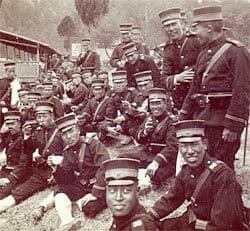