This article is over 18 years, 8 months old
DR GHAYASUDDIN Siddiqui is leader of the Muslim Parliament of Great Britain and a prominent member of the Stop the War Coalition. He spoke to Socialist Worker about the impact of the anti-war movement on the Muslim community in Britain. Dr Siddiqui uses the term Islamist to refer to groups the mainstream press would usually call Islamic fundamentalists.
Downloading PDF. Please wait...
Saturday 17 May 2003

DR GHAYASUDDIN Siddiqui is leader of the Muslim Parliament of Great Britain and a prominent member of the Stop the War Coalition. He spoke to Socialist Worker about the impact of the anti-war movement on the Muslim community in Britain. Dr Siddiqui uses the term Islamist to refer to groups the mainstream press would usually call Islamic fundamentalists.

‘IF YOU start from 11 September, immediately after there were a number of meetings which led to the formation of the Stop the War Coalition. We were there from the very beginning. We saw this development as very positive, one that would allow the Muslim community to get out of their ghettos and play a role in mainstream politics, in this case a mass protest movement. We said this was a great opportunity. I remember sending a statement to all Muslim community leaders saying that we must realise this. There is a lot of pent-up frustration, especially among our youth. Through this movement we showed them there is a real alternative to being supporters of Bin Laden.

‘We have seen a growing number of Muslims, especially young people, participating in the demonstrations. For them to see being part of wider society and a mass movement as the way forward is very important.

‘An Islamist organisation like Hizb ut Tahrir issued a statement saying we should have nothing to do with the Stop the War Coalition, that it was led by the left, and so on.

‘We took the view that the future of Iraq will be decided by Bush and Blair, and big business which ultimately they represent. Historically the Islamists have always been accused of working with big business. We said, is that what you want to be remembered for? For goodness sake reconsider your position.

‘Their position was just silly or stupid. They had one demonstration on their own and I was told it wasn’t very big. That is not to say people like this will disappear, but their space is shrinking. That has been a major result of the anti-war movement. A debate is beginning to happen about what is the best way of pursuing political issues arising in the Muslim community.

‘The Muslim community, like any other, has loads of organisations of different persuasions. But I think that the old barriers are breaking down. Ordinary Muslims are discussing, and they often find that the arguments put forward by their own leaders are not so powerful as some of those put forward by others.

‘A few weeks ago a hardline youth movement invited me to talk to their meeting. This could not have happened before. Also within the Muslim community issues like secularism, human rights and civil liberties are being discussed. In the Islamist view these are secular issues that the faithful are not supposed to be interested in. But now people are seriously discussing all these issues. A number of us feel we need a youth movement for the Muslim community, one that addresses issues like globalisation, the environment and such things. So far no Muslim youth group has declared for that kind of agenda.

‘So there have been a number of meetings within the community, and we are hoping such a group will be launched soon. This would be a major development and a result of engaging with the mass movement.

‘Bush’s war is not a war about Islam. I have always said, do you honestly believe that if Afghanistan was a Buddhist country the US and Britain would not have attacked? They attacked Afghanistan because it provides the shortest route for a pipeline from Central Asia to the Indian Ocean. The massive demos around the world negate the argument.

‘If this is a war against Islam, why are all these people who aren’t Muslim marching? People are beginning to see it is something different. My argument is that people all over the world demonstrate because they see the Americans going out for full spectrum dominance. It is a war between the oppressor and the oppressed, and we are the oppressed, millions of us from all kinds of backgrounds.

‘We must go out and build bridges, and make it a common struggle. The anti-war movement has also politicised a whole young generation. Look at young people and school students – they have been so brilliant. The anti-war movement has inspired millions all over the world. The challenge for the whole movement now is to channel the energy into something positive and make it long lasting. There are other issues. The Asian Times asked me to comment on the Labour performance in the elections. I gave two reasons for their poor performance. One was Labour’s participation in Bush’s war on Iraq and the other is privatisation of public services. These are the major reasons why traditional support for Labour, including in the Muslim community, has been eaten away.

‘The problem at the moment is that in a general election there is no other alternative so the Labour Party will still get elected. Do we want Iain Duncan Smith to be prime minister? Of course not. Charles Kennedy and the Liberals have failed too. I thought the war was a great opportunity for them, but Kennedy wasn’t up to the mark. There is a great challenge for the movement, to build an alternative people can trust.

‘We have seen how big business has taken charge of the White House. If that can happen in the US it can happen elsewhere. Unless the progressive movement rises to the challenge we can see things like in Burnley with the BNP. They feed off the social exclusion, poverty, unemployment. Nobody says it is Thatcher’s policies that are responsible for these, not immigrants or asylum seekers. In areas like Burnley, a lot of the segregation you see in schools and housing is the result of deliberate policies by councils and governments. If a large number of Asians live in one area this is not their choice, it is the policy choices of people in authority.

‘We are against ghettoisation. Government and council policies have to ensure that people interact at all different levels. We can build a movement which can counter this globalisation process and US hegemony. We have to come together if we want any chance to counter the forces against us, otherwise we will all be losers.’

More on Muslims in Britain

THE 2001 census revealed some interesting facts about the multicultural nature of society in England and Wales. Some 37.3 million people declared themselves to be Christians of one sort or another.

Of the Pakistani community some 54.5 percent were born in England and Wales. More than a third of Muslim children live in households where no adults work. 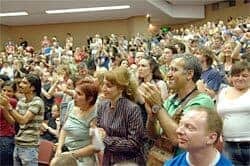 Marxism 2007: activists flock to the best festival of resistance

History you don't learn at school