This article is over 9 years, 7 months old
The corridors of power at Scotland Yard swirl with unlimited self-regard. Scandal leads to closing ranks and the odd scapegoat being charged, a larger number of officers retiring or transferring and an inquiry that produces a whitewash.
By Simon Basketter
Downloading PDF. Please wait...
Tuesday 29 May 2012

The corridors of power at Scotland Yard swirl with unlimited self-regard. Scandal leads to closing ranks and the odd scapegoat being charged, a larger number of officers retiring or transferring and an inquiry that produces a whitewash.

It remains wracked with corruption and has admitted this, in one way or another, over the last twenty years.

What is perhaps more revelatory is that the attempts to deal with that corruption have been a stopgap at best and themselves corrupt at worst.

Paul Condon was head of the Metropolitan Police during most of the 1990s.

He coined the phrase “noble cause corruption”—saying that some police justifiably “bend the rules” to get a conviction when officers “knew” the accused was guilty, but had no proof.

Condon was saying that the corruption at the heart of the Met had “noble” intentions. It was a green light for his officers to continue to “fit up” the innocent.

Condon set up the a secret anti-corruption squad known as the Untouchables. A number of senior officers—such Andy Hayman, John Yates, Paul Stevens and Ian Blair—were in the squad.

They used supergrasses to get convictions, most of which were unsafe.

They have all since resigned.

For instance between 1999 and 2001, supergrass evidence jailed five detectives for serious corruption offences. Essentially this involved ripping off drug dealers.

Detectives in the squad routinely carried a “First Aid kit”. It contained a balaclava, drugs and a gun. It was used to plant evidence. Officers were involved in both covering up and colluding with criminal gangs.

Fortunes were made but there were victims. The police informer David Norris and the private investigator Daniel Morgan were murdered.

And when Stephen Lawrence’s murderers were linked to the same criminal gangs a poisonous mix of corruption and racism stopped the murder being investigated.

Neil Putnam, himself a corrupt former cop, has maintained that he had told debriefers how a Sercs detective called John Davidson had admitted being in a corrupt relationship with the gangster father of the David Norris.

Norris was part of the gang that murdered Steven Lawrence.

The Independent Police Complaints Commission finally agreed to investigate that evidence last month. But in reality the corrupt cops are still untouchable. 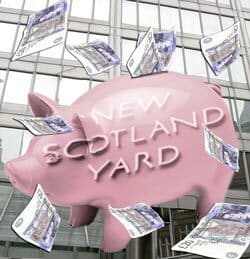 The Untouchables - corruption in the Met police