The latest evidence shows that early humans lived in Britain 400,000 years earlier than was previously thought.

A new exhibition, Britain: one million years of the human story, shows the results of an extraordinary 12-year research project led by Chris Stringer, a world expert on human origins.

Scientists carried out new excavations and re-examined old finds with new methods of investigation and dating.

So when the researchers found stone tools in sediment laid down in Norfolk when the direction of the magnetic field was the opposite of today, they knew this meant humans had lived here long before anyone had previously thought possible.

The evidence they bring together in this exhibition shows successive waves of early human species migrating to Britain. One concluding panel declares, “Britain is an island of immigrants and always has been”.

But the work that Stringer and his colleagues have done doesn’t just help debunk racist myths about what it means to be British. It sheds light on what is the essence of being human.

It confirms what socialists say about class society being a relatively recent development in the long history of human habitation on earth.

It’s easy to think that the way humans live today is natural and how we have always lived. Yet for the vast majority of human history we did not live in societies with hierarchies, class divisions and systematic oppression.

The exhibition brings together for the first time the oldest human remains and artefacts ever discovered in Britain. These range from the milk tooth of an eight-year-old Neanderthal child found in a Welsh cave to the giant tusk of an elephant.

The fragments of evidence we have from these first species of humans are important.

They show our earliest ancestors as social beings, living in groups where the ability to cooperate and communicate would be at a premium.

The common feature of the earliest human species was the use of tools to work on nature. Humans are unique in the ability to consciously work on the world and environment around them.

They have no fur or feathers but can survive in cold climates by building shelters and using animal skin as covering to keep warm.

Flint tools sharpened to carve wood, scrape animal skin and slice meat have survived across the whole Eurasian land mass, which at the time encompassed Britain.

The extremes of climate Britain experienced over time meant a huge range of different animals have roamed the land.

This included woolly mammoths, sabre toothed cats, bison and lions. Hippos swam in the rivers of the Yorkshire Dales and the Thames.

Researchers found tools and flint flakes from sharpening them alongside bones of large animals with butchery marks on them.

They concluded that such animals would be too big for an individual to kill on their own and so would have to have been brought down or scavenged by a group working together.

At one site a total of 300 flint axes were found.

This might indicate people working together not just to hunt but to butcher what would be large amount of meat.

Such a kill would then need to be shared among those who took part. All of which takes a level of social organisation and some communication.

Many other tools used over hundreds of thousands of years that time will have destroyed. It’s likely early humans used twine, nets for fishing, wooden tools and traps for example.

Several ice ages reduced huge swathes of land all the down to what is now London to nothing more than polar desert making human life impossible.

There were periods sometimes of 100,000 years when no human life existed in Britain.

This meant human settlement in Britain was often tenuous and was wiped out several times only being reoccupied when a warm Mediterranean climate returned.

To see our past mapped out across such an expanse of time exposes today’s society as little more than a blink of the eye in the history of human existence.

It also shows that our past is not a simple story of an accumulation of ever-greater advances that culminate in modern capitalism.

Through this time several species of humans came to Britain, the most recent being Neanderthals up to 400,000 years ago and homo sapiens, to which all modern humans belong, about 40,000 years ago.

Far from being the brutal and primitive species that they are often portrayed as, the Neanderthals were innovative and intelligent.

They organised as social groups and there is evidence they looked after their sick and buried their dead.

So in fact they share many attributes with homo sapiens, the species to which modern humans belong and which was to outlast them.

It’s sometimes been suggested that homo sapiens emerged victorious after waging war on Neanderthals. This plays to beliefs about humans being naturally violent and competitive but there is no evidence to back it up.

And many of their social and tool making attributes are not all we share. Now modern DNA mapping can break down our genetic make-up. It shows that all modern humans outside of the African continent have roughly 2 percent Neanderthal DNA.

This means the earliest homo sapiens who migrated from East Africa around 60,000 years ago co-existed alongside and interbred with the Neanderthals in the Eurasian land mass.

The researchers argue that it is from this group that everyone in the world outside of the continent of Africa is descended from.

The homo sapiens who arrived in Britain developed more intricate tools  and were more adaptable than Neanderthals. Their social networks were larger and they routinely moved further distances than previous human species.

They developed tools not just for survival and for the first time created representations of themselves and other animals in the form of art and decoration.

Decoration and evidence of rituals for burial and seasonal gatherings show the increasing development of culture and customs.

One glass case in the human history exhibition contains the remains of a man whose ceremonial burial included periwinkle shells and ivory rings carefully sewed into his clothing 34,000 years ago.

This evidence of an increasingly complex social life, the use of symbols and communication and sharing of culture is what marks out the modern human.

The most recent influx of homo sapiens only arrived and settled in Britain after the last ice sheet receded relatively recently, around 12,000 years ago.

The reoccurring theme of human history is one of constant change as humans both adapt to and shape their environment.

Ironically recent environmental damage and eroding coastlines have sometimes delivered the richest source of finds about our past. Remains in Norfolk were exposed in sediment unseen for hundreds of thousands of years.

One film clip records archaeologists rushing to document and photograph ancient footprints suddenly exposed by a violent storm on a beach last year.

They hold umbrellas over each other as they scoop wet sand out of dips made by the feet of a group of adults and children who walked along the mudflats of the Thames, which then flowed far to the north of its current course.

Later they calculate that the footprints are an astonishing 800,000 years old—the oldest known in Europe, and some of the oldest in the world. Not long after this vivid evidence of human life was revealed the sea submerged and destroyed it.

Time and again we are reminded that humans’ ability to shape nature has enabled us to survive in different climates and habitats across the globe.

But under capitalism our ability to shape nature is distorted by a system driven by profit which poses a threat to the future of all humanity.

We don’t want to go back to the sort of societies that existed before class developed. Today new technology and productive abilities mean that there is the potential in a socialist society for all of humanity to have a secure future free from poverty and hunger.

Britain: one million years of the human story is on at the Natural History Museum, London until 28 September. nhm.ac.uk

The Origin of Our Species by Chris Stringer (£9.99)

The Origin of the Family, Private Property and the State by Frederick Engels

Engels and the Origins of Human Society by Chris Harman 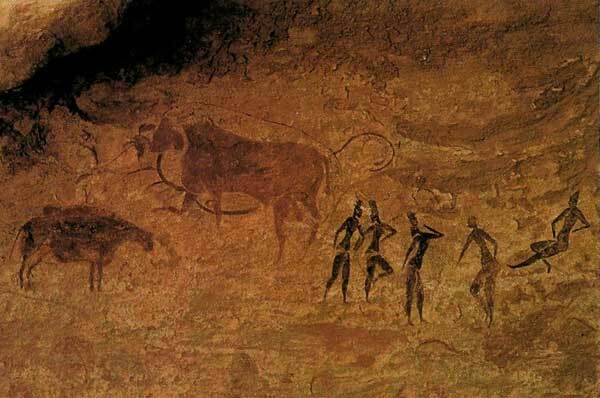