At the end of last year we witnessed an appalling upsurge of racist violence in Sydney, Australia. In Britain, last year brought the racist murder of Anthony Walker on Merseyside.

Police figures showed a significant increase in racist attacks. And, on a day to day level, surveys revealed continuing discrimination faced by black and Asian people in education, employment, the criminal justice system and every area of social life.

How is it that such racism can continue to exist? It hasn’t always been so throughout human history. Almost all classical scholarship agrees that whatever distinctions were made in ancient civilisations—which were certainly brutal—they were not based on the idea of “race”, which is a modern notion.

That concept and with it racism—the idea of inferior and superior “races”—arose with the transatlantic slave trade that marked the birth of capitalism in the 17th and 18th centuries.

One the one hand, capitalism was born with the idea that “all men are created equal”, as the US declaration of independence put it. At the same time, the early growth of the system was fuelled by the enslavement of millions of black Africans.

The contradiction was eventually resolved by saying that you can treat black slaves like animals because they are subhuman, part of an inferior race. In the 19th century such racism was a central justification for the European empires in Africa and Asia. Black and Asian people were seen either as savages or as “childlike” races in need of a guiding white hand.

But how can we explain the continued existence of racism? The slave plantations have long gone. We don’t have the formal colonialism of the British empire (though, we do, of course, have imperialist wars waged by powerful states).

The racial segregation in the US south enshrined by the Jim Crow laws has also gone, as has the apartheid regime in South Africa. And in Britain we have had a succession of Race Relations Acts over the past 40 years.

Nevertheless racism has continued into the 21st century—though today it typically justifies itself on “cultural” grounds rather than crude biological claims. This continued existence of racism points to just how fundamental it is to the capitalist system. And some racist ideologies are more obviously generated by capitalism than others.

Take anti-Muslim racism — also known as Islamophobia. We have seen an upsurge of such prejudice, often given a liberal gloss, over the last four years. It’s not hard to fathom why. It is basically the ideology used to justify the “war on terror”, which is itself part of the imperialist project of the US state to dominate the globe.

We can compare the treatment of Muslims today with the treatment of Jews in the early 20th century. They were seen as an alien presence in European cities—a competitive threat to indigenous workers at home, and, in the crazed ideology of anti-Semites, a threat to the nation from without thanks to their supposed control of powerful institutions.

It’s not just the hardened racists of the BNP who are targeting Muslims. So are the government and the establishment, in their own particular way. Instead of examining the real reasons for terrorism, which would lead to them having to denounce their own policies, they look to a “group” explanation.

There must be something wrong with Muslims, they say. The problem is “Muslim terrorism”. And Muslim, here, is essentially a racial category, as anyone who has been stopped and searched for “looking Muslim” will tell you.

You can see the way this leads to renewed racism just by contrasting the current approach to the response to the last bombings in London, in 1999. When BNP supporter David Copeland bombed Brixton, Brick Lane and Soho, there was no demand on the “white community”, or even the BNP, to apologise.

But today Muslims have to come out again and again to show the world how sorry they are for the 7 July bombings, under threat of being seen as an enemy within if they don’t condemn louder than anyone else.

So, beneath official talk of multiculturalism and opposition to racism is, in fact, the creation of racial prejudice and stereotyping because those responsible for the system cannot admit to its fundamental faults.

That’s true not just of foreign policy, but of the way capitalism works, and fails, daily. Throughout its existence capitalism has needed immigrants, often pushing them into low paid, dirty jobs.

In the 19th century they came from the British countryside and Ireland. In the years after the Second World War, they came from the Caribbean and south Asia. Now there are new immigrants from Eastern Europe and Africa—as well as large numbers of people from the US, Australia, western Europe, whites from South Africa and others who don’t tend to get targeted in immigration panics.

Repeated inflows of immigrants have a contradictory effect. They create the potential for workers to be drawn together, to mix at work and residentially, as a recent study reported in Socialist Worker highlighted. But they also, particularly at times of social and economic crisis, provide ready scapegoats in the form of immigrant groups.

Karl Marx, writing in 1870, described the consequence of such a division between different groups of workers when Irish immigration was the main source of migrant labour. He wrote:

“Every industrial and commercial centre in England possesses a working class divided into two hostile camps, English proletarians and Irish ­proletarians. The ordinary English worker hates the Irish worker as a competitor who lowers his standard of life. In relation to the Irish worker he feels himself a member of the ruling nation.

“The Irishman pays him back with interest. He sees in the English worker at once an accomplice and a stupid tool of the English rule in Ireland. This antagonism is artificially kept alive and intensified by the press, the pulpit, the comic papers, in short by all the means at the disposal of the ruling class.”

These words are well over a century old, but they speak profoundly to us today. At the heart of racism is the attempt to divide workers along racial lines.

These divisions are maintained because the racist myths and stereotypes perpetuated in the media and by right wing politicians can be accepted by workers who feel powerless to actually improve their conditions.

It’s easier to use a scapegoat than confront the real problem—that the bosses treat everyone badly regardless of colour or creed. Racism stops workers from realising this and the bosses are fully aware of this fact.

Of course people don’t necessarily fall for racist ideas. Some reject them entirely, others hold an unstable mixture of racist and anti-racist notions. For instance, it is by no means unusual for someone to be “against asylum seekers” in the abstract, but nevertheless to actively oppose the deportation of refugees that they know through work or the local community.

But why are white workers able to fall for the racist lies that the ruling classes push? It is not because white people benefit materially from racism. It is because capitalism makes the white worker feel that he or she is in competition with black or immigrant workers for jobs, housing and other necessities.

This is further fuelled by the right wing media and politicians making out that black people are to blame for white people’s lives being rubbish.

In helping to keep capitalism going racism serves to preserve the exploitation of both white and black workers. But all this is not to say that there is some huge capitalist conspiracy, even though it may feel like that sometimes. The day to day competition of capitalism pits one group of workers against another, even when those antagonisms aren’t being deliberately stoked.

So there is always a basis for turning differences between different groups of workers into hardened racial separation. The fact that different major immigrant groups have arrived at different times also means they can find themselves slotted into particular areas of the economy depending on which industries were expanding at the time they arrived.

That is a further source of turning mild differences between people into hardened racial antagonism. The recent disturbances in Lozells, Birmingham, showed the extreme of that situation, where sections of one community ended up blaming another for their poverty and lack of opportunities.

Some people were shocked that oppressed groups should fight each other on racial grounds. But, unfortunately, there is nothing automatic about suffering from one form of oppression that makes you identify with those on the receiving end of another.

Of course, capitalism does not need, or want, violent racial disturbances happening every day. But by constantly failing to deliver for working people, it creates the conditions for racial tension, even when bosses want controlled immigration to meet the needs of the labour market.

The policy of New Labour over immigration shows the contradiction. It wants certain forms of migrant labour. It wants a big share of, for example, Indian computer studies graduates in order for British information technology firms to compete globally. At the other extreme, it is quite happy to have low paid Eastern European and African workers cleaning the offices of those corporations on barely the minimum wage.

What it doesn’t want is those groups of workers becoming part of a collective working class movement in Britain and joining the fight for welfare and workplace rights. So migrant workers come under a series of restrictions.

The only way of justifying that is to appeal to some form of racist ideology. For, if not, then you would have to accept Polish workers, for example, being paid the union rate on construction sites. And the whole purpose of the policy of neo-liberal governments around the world is to move in the opposite direction—a race to the bottom for all workers in the globalised economy.

But what governments and employers want is not necessarily what they get. While capitalism creates the basis for division, it also creates the conditions for unity.

The battle just before Christmas by workers in Ireland in support of seafarers on Irish Ferries was the most recent inspiring example. For years there have been often successful attempts to scapegoat migrant workers in Ireland. But the collective militant fightback against the bosses of Irish Ferries united migrant and indigenous workers around demanding decent jobs for all.

The anti-war movement in Britain has brought similar unity around a central political issue. The campaign against the Nazi BNP has created spaces in which it is possible to challenge not just the most obscene racist myths, but the more respectable ones peddled by the press and many politicians.

So it’s possible to push back racism. But for so long as a system exists that divides the world between a rich elite and the rest of us, we will face divisive ideologies, such as racism, that serve to prop it up. 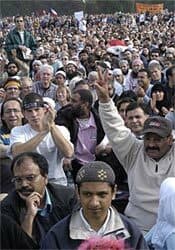 The myth of Britishness 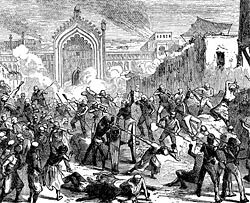 The Indian Mutiny: rejection of empire