A three year battle for freedom

Clive Stafford Smith is worried that time is running out. The human rights lawyer represents the increasingly desperate residents of Guantanamo Bay, currently on hunger strike as a protest about their treatment.

Right now, he says, the situation is taking a turn for the worse.

“The world needs to know that these guys are going to die in the next two to three weeks,” said Stafford Smith recently. “They are starving themselves to death.”

The prisoners at Guantanamo doubtless feel that they have been held in inhumane conditions for far too long by the US authorities. Prisoners at the notorious Cuban detention centre have been on hunger strike since early August.

“People are desperate. They have been there three years. They were promised that the Geneva Conventions would be respected and various changes would happen and, unfortunately, the US government reneged on that,” Stafford Smith said.

An earlier hunger strike which took place in July was halted when the US authorities agreed to allow the prisoners to form their own representative group.

Statements from prisoners reveal that the men are starving themselves in protest at the conditions in the camp and at their alleged maltreatment — including desecration of the Qur’an — by US guards.

Stafford Smith, who represents 40 of the inmates, has assisted in the filing of 128 lawsuits on behalf of various prisoners held in Guantanamo Bay, and has publicised the plight of many who have been tortured.

He’s also travelled extensively throughout the Middle East, working to identify family members of the detainees and securing their permission to file suits. Among the men who are being held at the base are Binyam Mohammed, a former London schoolboy.

Mohammed told Stafford Smith, “They [the US military] have betrayed our trust. Therefore the strike must begin again. I do not plan to stop until either I die or we are respected. People will definitely die.”

Stafford Smith has also worked with British lawyers, and the British government towards securing the release of the British nationals held in Guantanamo Bay, and is assisting work on behalf of the British residents who are being held there, all of whom are facing the death penalty.

Using the legal procedures available, in March 2004 he filed a brief with the US supreme court which supported the Guantanamo prisoners’ request for permission to challenge their detention before a civilian court.

But Stafford Smith’s razor-sharp mind and powerful sense of injustice have also been utilised elsewhere. He has become renowned and respected as the lawyer who has had a long-running battle against the death penalty in the US.

Originally working as a journalist, he spent one summer volunteering with an anti death penalty group in Atlanta, visiting people on death row, where he realised that prisoners on death row had no right to lawyers.

He decided to train as a lawyer. He says, wryly, that this “was one way to sink even lower in the public’s esteem than being a journalist”.

Living in the US for over 20 years, he worked with nearly 200 death row inmates to prevent executions, in the process shaming racist judges, and striving tirelessly to bringing about a more humane world.

He speaks with a fierce conviction for the work he does, and even wears the watch of a man who served time on death row. He speaks like a man thoroughly convinced of the cause he fights for.

He speaks out against the use of prisons in society, which he sees as pernicious. “I don’t believe in punishment,” he says. “It would be very hard for someone to put their mother in prison.

“If you can’t do it to people you love, you shouldn’t do it people you don’t know. There are a small number of people in society who are quite dangerous, and they need protection from themselves. But most prisoners don’t need that. Holding people responsible for their actions is the excuse we use to abuse people.”

Stafford Smith admits that his efforts on death row don’t always prevail — over the years, he has lost six clients.

“You can’t stop every execution,” he says, “but you can give every human being dignity in what they are going through. There’s nothing more undignified than being on death row.

“People on death row are reduced to nobodies. They’re reduced to sub-human beings, who we want to kill. Your life becomes fairly meaningless unless you have friends on the outside who are willing to help.”

He does feel, however, that the US is slowly changing. “We’re definitely prevailing. They’re realising that they make a lot of mistakes. If we live long enough, I think we’ll see the abolition of the death penalty.”

Summing up his motivation, he says, “While we’re on this earth, there’s only one point to it, to get between the people who are hating, and those who are being hated.”

The prisoners in Guantanamo Bay are hoping that he will continue to get in between the two — their lives may depend upon it.

Clive Stafford Smith works as the legal director of Reprieve, a London-based human rights charity, and since 2002 has provided legal assistance to prisoners at Guantanamo Bay. For more information go to www.reprieve.org.uk 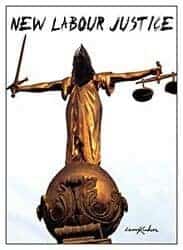 Guantanamo Bay: behind the wire