This article is over 12 years, 8 months old
The latest downward spiral for the occupation cannot be solved by sending in more troops or spreading the war to Pakistan, writes Simon Assaf
Downloading PDF. Please wait...
Tuesday 05 May 2009

The Hydra in Greek mythology was a beast with nine heads. When one was cut off another two would grow in its place. This is an apt description of the West’s dilemma in Afghanistan and Pakistan.

Some eight years after the battle for “hearts and minds” in Afghanistan was supposedly won, the occupation is spinning into a deep crisis.

The Pakistani Taliban, insurgents who are allied to the resistance in Afghanistan, triggered global panic last month when they took control of Buner, a region some 60 miles north of Pakistan’s capital Islamabad.

An offensive by the Pakistani army was able to them drive out, but not before Hillary Clinton, the new US secretary of state, warned of an “existential threat to Pakistan.”

The deepening malaise of the war is laid bare here. A key battle for Afghanistan is now being waged on the edges of Islamabad.

Clinton’s comment reflects the deep fear that the war is now in danger of destroying Pakistan.

The stakes could not be higher. The US, Nato and their allies in the Afghan government hold little sway over Afghanistan outside Kabul. Now even sections of the capital are beginning to slip away from their control.

Any support the occupation enjoyed during its early years has melted away. Heavy casualties from air strikes fuel growing anger, as do “night raids” – assaults on villages suspected of harbouring resistance fighters.

This anger is translating to tacit ­support for the insurgents.

The isolation of the occupation inside Afghanistan has become further complicated by the fact that the foreign troops are hopelessly surrounded.

Afghanistan is landlocked and dependent on supplies that are shipped through Pakistan. This route winds through the insecure insurgent areas in the north of the country.

In recent months insurgents have attacked supply columns, hijacked scores of armoured vehicles and set fire to military stores in the port city of Karachi.

The occupation has had to turn for help from Afghanistan’s neighbours such as Iran – which has some influence in the west of the country. This region is home to Shia Muslims, who are hostile to the Sunni Taliban.

Some Nato countries, such as France and Germany, want to tempt the Iranians into letting them use their ports to resupply the Nato troops.

But any such deal would come with a hefty price tag. Iran is in conflict with the West over Iraq, Palestine and Lebanon, economic sanctions and its nuclear programme.

The alternative is to look to the unstable states of Turkmenistan and Uzbekistan on Afghanistan’s northern border.

Here Russia holds sway. It did get the governments to open supply routes. But it can always choose to close them again.

So Russia holds a powerful tool to use against the US and the European powers when it comes to key issues such as the accession of Georgia and Ukraine to Nato, or the missile defence shield along Russia’s western frontiers.

To avoid such pressure the coalition is desperate to resolve the situation on the border between Afghanistan and Pakistan, which has been given the unfortunate tag of the “Af-Pak war”.

The new US strategies were unveiled by Barack Obama in March.

He is attempting to pour more troops into Afghanistan in the hope this will buy time to strengthen the Afghan army.

But there is a limit to what the US can supply and, as Bush discovered before Obama, Nato is reluctant to commit large numbers of troops.

Its leaders are coming to realise that it will take more than greater troop numbers to turn the battle around.

There are currently about 60,000 US and 58,000 other international troops in Afghanistan. The extra 20,000 soldiers the US is sending are too few to make any lasting military impact.

By contrast this occupation is struggling to maintain the local force of 80,000 soldiers.

Karzai, however, is proving ­stubborn. He has called snap elections in August in an attempt to head off plans to unseat him. He has been granting concessions to Islamists as an attempt to boost his standing.

His negotiations with elements of the Taliban, sponsored by Saudi Arabia, have so far failed to produce any real breakthrough.

Now any chance of winning over sections of the local resistance has been put in danger as many of the new troops will be used to destroy the vast opium poppy plantations.

This is seen as vital in “cutting the lifeline of the insurgency”.

But the occupation is taking a big risk by opening up a new front on Afghanistan’s desperate farmers – many of whom have joined the resistance as a way of defending their crop.

The success or failure of the Af-Pak strategy is hostage to the biggest gamble of all – spreading the war into Pakistan in the hope of wiping out the insurgents’ sanctuaries.

The recent events near Islamabad are a testament to how badly off track this approach has become.

The current occupiers of Afghanistan face the same dilemma as all those that came before.

To secure control over the towns the occupation troops must push into the farmlands, mountains and valleys.

This has been the pattern of ­fighting over the past seven years.

This strategy of “hot pursuit” was successful at first. But it came to a halt when the resistance fighters began escaping across Afghanistan’s long and porous border with Pakistan.

So the US sent in unmanned Predator drones armed with deadly payloads of missiles to hunt them down.

According to The News newspaper in Pakistan only ten of the 60 drone attacks so far have found their target, killing 14 insurgent leaders.

The rest have hit civilian areas and killed at least 687 people.

The popular revulsion at the use of these drones embarrassed Pakistan’s government at first, and quickly fed support for a nascent insurgency in the tribal regions.

As this rebellion grew, the US and its allies pushed Pakistan’s military to move into the border region, breaking a long standing if uneasy truce.

The military forays ended in disaster. Defeat undermined Pakistan’s dictator Pervez Musharraf and has seriously compromised the government that replaced him.

Many young men have joined the ranks of the insurgency. As one tribal elder explained, “Our youths have become bitterly angry. The courageous among them have joined Taliban, no matter whether they agree with their philosophy or not.”

Now the US wants to expand its range to the vast and volatile Baluchestan region of northwestern Pakistan.

These attacks could stir the region, which also spills into eastern Iran, to join the growing insurgency.

In reference to an increase in the use of drones, Obama recently declared, “We will insist that action be taken, one way or another, when we have intelligence about high-level terrorist targets.”

The spillover of the war has come to represent a serious destabilisation of Pakistan. As the Pakistani Taliban grew with the revulsion at the US war, so did the range of its demands.

It built on longstanding anger at central government ­corruption and revived the demands of the secessionist movements that once held sway in the regions.

By adopting the Af-Pak strategy, Obama has made the war his own.

But one of the new president’s dilemmas is inherited from George Bush’s administration. To retreat would be a recognition of the greatest military ­disaster for the US since Vietnam.

To remain and try to win the war risks not only losing Afghanistan, but also Pakistan – a loss that would be deeply troubling for imperialism.

It is for this reason that the war has become, in the words of Neil Abercrombie, the head of the US Congress’s Armed Services Subcommittee, a “colossal ­geopolitical blunder”. 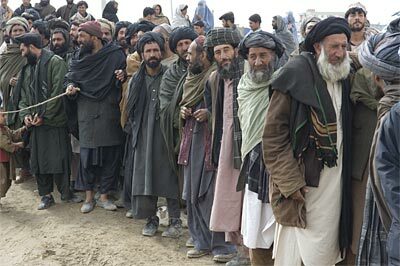