‘Africans will not be silent victims’

This article is over 16 years, 6 months old
Capitalism and imperialism — from the transatlantic slave trade through to the debt crisis — are responsible for the long agony of Africa, writes Mary Oredi
Downloading PDF. Please wait...
Saturday 02 July 2005

Imagine a different G8. Flying in to Lagos, the centre of the United States of Benin, are the leaders of Great Zimbabwe, Katanga and Aksum. They will be joined by other leaders of Asia and South America to decide their latest proposals for lifting the debt burden from impoverished states in Europe.

They shake their heads at the corrupt rulers of weak states, like the Bush king in America.

Impossible? Not if the trends of most of human history had continued, a history which saw African states at the forefront of human development.

Of the many possible accounts, look at the writings of the man who we know as Leo Africanus. His real name was El Hasan ben Muhammed el-Wazzan-ez-Zayyati and he was born in the Moorish city of Granada (now in Spain) in 1485, but was expelled along with his parents and thousands of other Muslims by Ferdinand and Isabella in 1492.

He was captured by Christian ­pirates and presented as an exceptionally learned slave to Pope Leo X. Leo freed him and commissioned him to write a detailed survey of Africa. It provided most of what Europeans knew about the continent for the next several centuries.

About 1520 Leo Africanus visited the Ghanaian city of Timbuktu. He wrote:

“The houses of Timbuktu are huts made of clay-covered wattles with thatched roofs. In the centre of the city is a temple built of stone and mortar, and in addition there is a large palace, where the king lives. The shops of the artisans, the merchants, and especially weavers of cotton cloth are very numerous. Fabrics are also imported from Europe.

“The women of the city maintain the custom of veiling their faces, except for the slaves who sell all the foodstuffs. The inhabitants are very rich, especially the strangers who have settled in the country.

“There are many wells containing sweet water in Timbuktu.

“Grain and animals are abundant, so that the consumption of milk and butter is considerable. The king has a rich treasure of coins and gold ingots. One of these ingots weighs 970 pounds.

“The royal court is magnificent and very well organised. The king greatly honours learning. Many handwritten books imported from Barbary are also sold. There is more profit made from this commerce than from all other merchandise.

“The people of Timbuktu are of a peaceful nature. They have a custom of almost continuously walking about the city in the evening between 10pm and 1am, playing musical instruments and dancing.”

This is just one example of a large number of highly developed African civilisations in empires, states and urban centres such as Aksum, Great Zimbabwe, Monumutapa, Asante, Songhay Katanga, Jenne-jeno, Benin and many others. They were often far in advance of anything at the same time in Europe.

So what went wrong? Why is most of Africa now so disadvantaged compared to much of the rest of the world? The short answer is that it was distorted, thrown back and beggared by the advent of capitalism on a global scale. The first wave of globalisation hit Africa hard, just as the second wave of globalisation has more recently.

The first hammer blow was the slave trade. Capitalism developed first in western Europe. One of the prime sources of the money needed to kickstart capitalist expansion in these countries was the exploitation in Brazil, the Caribbean and the US of mines and plantations where sugar, tobacco and other profitable crops were grown.

The capitalists needed vast supplies of cheap labour to develop the plantations.

Indigenous sources were too sparse and European workers died in uneconomically large numbers. But Africans often had experience of agriculture and keeping cattle, were used to a tropical climate, resistant to tropical diseases—and they could be worked very hard.

From the 15th century, slave traders began to raid Africa.

Slavery had existed in Africa before the Europeans came. It was a feature of many of the great civilisations mentioned above and was, of course, an unjust system. But slavery in this context was built into a web of social rights that was quite different to the industrial system of slavery instituted by capitalism.

It was also on a much smaller scale. For example, research in Kenya has shown that about 3,000 slaves a year were exported from Africa to Arab lands during the first half of the 19th century.During a similar period about 50,000 slaves a year were exported through the transatlantic slave trade. And this was a fall from the peak of 70,000 at the end of the 18th century.

The transatlantic trade saw some 54,000 slave voyages between the 16th and 19th centuries.

About 12 million Africans were seized, pressed into the hell ships and forced to undergo an agonising journey of 4,000 miles. They arrived, if they did arrive, utterly separated from their homelands and families, non-persons who were to be useful only for their work.

The trade had a devastating effect on Africa, spreading much wider than the 12 million who were actually exported. Raymond Jalama, a merchant of Luanda, Angola, in the late 18th century, observed that nearly half of those captured inland were dead by the time they reached the African coast. Perhaps 18 million or 20 million people were captured.

It has been calculated that if there had been no slave trade the population of Africa in 1850 would have been 50 million instead of 25 million. African economic and social development was hurled back.

The abolition of slavery in the mid-19th century was largely as a result of revolt by slaves themselves, although there were also changes in the specific method by which capitalists made profits. But as this one burden was lifted from Africa, another appeared in the shape of colonialism.

In the space of 20 years from 1885 to 1905, Africa was sliced up and divided between the European powers. Sometimes the theft of African lands was carried through by fraud and manoeuvre, more frequently by force. Again, one episode must stand for an immense historical process.

Benin, a small city-state east of Lagos in what is now southern Nigeria, was one of the glories of African civilisation. Its seizure by the British in 1897 involved the invasion and destruction of the state, the show trial of its king (the Oba), the execution of its leading chiefs, the torching of the royal palace and the burning of innumerable villages.

The British “punitive expedition” of 1897 led to the seizure of the Benin bronzes, now in display in the British Museum and the Horniman Museum, both in London.

One account describes how “we shelled the village, and cleared it of the natives. As the launch and surf-boats grounded, we jumped into the water, at once placed our maxims [machine guns] and guns in position, firing so as to clear the bush where the natives might be hiding.

“No white men were wounded; we all got off scot-free. Our black troops, with the scouts in front and a few maxims, do all the fighting.”

When Benin city was captured British marines put the palaces and compounds to the torch. After three days the fires got out of control, burning up what was left of the city.

When the Oba was captured an immense throng was assembled to witness the ritual humiliation that the British imposed on their subject peoples. The Oba was required to kneel down in front of the British military “resident” of the town and to literally eat the dust.

Supported by two chiefs, the king made obeisance three times, rubbing his forehead on the ground three times. He was told that he had been deposed.

The British leader told him, “Now this is white man’s country. There is only one king in the country, and that is the white man.”

Imperialist advance first smashed African societies and then sucked great wealth from the continent. African countries were subjugated to the will of the imperialist nations and their multi­national corporations.

On average, about 45 percent of the goods produced in colonised countries were exported to the imperial countries, at prices determined by those same imperialists. African economies were frozen at a particular stage of primary production development, hurled back compared to others.

Colonialism was eventually defeated by the national liberation movements ­after the Second World War and, for a brief period, there was a limited form of expansion and development. But this very quickly came up against the continuing strength of the great powers.

Leaders of independent states who in any way irked the imperialists were either eliminated or squeezed so hard by the system that they abandoned their opposition.

Then we have the modern era of debt and the structural adjustment programmes—the medicine that kills the patient. Africa has been pillaged and robbed by capitalism. That is why it is in its present state.

The assault was not simply economic, but psychological too. For the colonised nations, the centre of gravity for acquisition of knowledge is located elsewhere. Just like African goods, our history and culture has been exported to the great powers to be reinterpreted and sold back to us. Slavery spawned racism.

Colonialism and the beggaring of Africa have produced a vision of ourselves as powerless. At best we are the colourfully primitive, at worst the bestial and irrational. Always we are inferior.

That is why those who have revolted against imperialism and capitalism are so important. It has been both a physical battle for liberation and a fight for mental equality.

The line stretches from Abd al-Qadir, Al Haj Umar, Samori Toure and others who fought colonialism, to the masses of Johannesburg, Lagos and Harare who fight their local rulers and imperialism today.

Capitalism has been and remains our curse. It is this system that has made us slaves and then servants. There can be no successful battle for African liberation that is not also an anti-capitalist struggle.

There is a long road to struggle for freedom and for a socialist future. But to all those confronting the G8, let us be inspired by the words of African writer Ben Okri:

Never again will we stand
On the threshold of a new age.
We that are here now are touched
In some mysterious way
With the ability to change
And make the future.
Those who wake to the wonder
Of this magic moment
Who wake to the possibilities
Of this changed conjunction,
Are the chosen ones who have chosen
To act, to free the future, to open it up,
To consign prejudices to the past,
To open the magic casement
Of the human spirit
Onto a more shining world.

Mary Oredi is a researcher at Kenyatta University in Nairobi, Kenya 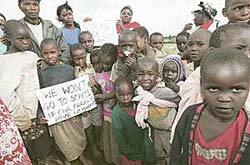 The reality of trade inequality — poverty and poisoned ground