An attempt to win the majority of workers

This article is over 17 years, 2 months old
A look at Tom Mann opens a series on the minority movement of the 1920s
By Keith Flett
Downloading PDF. Please wait...
Saturday 21 May 2005

The Minority Movement, organised by the infant Communist Party of Great Britain, sought to organise militants in trade unions. It worked with left wing leaders to shift the entire labour movement towards a more advanced industrial and political position.

The defeat of the General Strike in 1926 frustrated the plan, but that does not detract from the significance of the NMM in its first years.

Tom Mann was the most respected trade union militant of the early 1920s. He had a record of almost unparalleled militancy and activity, including a spell in jail in 1912 for issuing a leaflet calling on British troops not to shoot strikers.

Harry Pollitt, the organiser of the NMM, later to be the leader of the Communist Party, emphasised that Mann played a vital role in chairing weekly meetings and making sure that organisational issues were dealt with.

Mann was an engineer. He joined the Amalgamated Society of Engineers in London in 1881. Four years later he was a member of the Battersea branch of Britain’s first Marxist party, the Social Democratic Federation (SDF).

He began to campaign for the eight-hour day and by 1887 had become a full-time organiser for the SDF.

Along with people like John Burns and Ben Tillett, Mann led the London dock strike that resulted in the “new unionism” among unskilled workers. By 1890 he had persuaded the TUC, now increased in size by almost one million, to adopt the eight-hour day as its policy.

Mann became president of the Dockers Union in 1891, but he was constantly looking for new ways to organise. From 1894-6 he was general secretary of the Independent Labour Party, the main forerunner of the Labour Party. He began to focus on the organisation of labour on an international scale.

Mann founded the International Federation of Transport Workers in 1896 and he spent the years from 1901-10 organising in New Zealand and Australia. Returning to Britain he took a leading role in the huge wave of industrial agitation that swept Britain in the period 1910-14.

After the First World War Tom Mann was, from 1919-21, the general secretary of the Engineering Union. He joined the Communist Party and used his great skills to help build the new party.

At 68, as president of the NMM, he brought to the attempt to organise a trade union left a lifetime experience of industrial and political leadership.

The National Minority Movement was launched in August 1924 at a conference attended by 270 delegates, representing some 200,000 trade unionists. Its founding statement was:

“To organise the working masses of Great Britain for the overthrow of capitalism, the emancipation of the workers from oppressors and exploiters, and the establishment of a Socialist Commonwealth.

“To carry on a wide agitation and propaganda for the principles of the revolutionary class struggle, and work within existing organisations for the National Minority Movement programme and against the present tendency towards social peace and class collaboration and the delusion of the peaceful transition from capitalism to socialism.

“To unite the workers in their everyday struggles against the exploiters. To maintain the closest relations with the Red International of Labour Unions (RILU).”

The reference to the RILU was a reminder that while the NMM was based on the experience of activists like Mann, it was also part of a wider trend based on the politics that came out of the 1917 Russian Revolution.

The activity of the government and the employers—particularly the coal owners—from 1924-6 was designed to break militant trade unionism and worsen conditions for ordinary workers.

The work of the NMM was to organise to push the TUC General Council towards leading a fight against this, while also mobilising rank and file organisation from below.

In this the experience and discipline of Tom Mann played a central role. While Mann brought organisational skills and a lifetime of experience to the NMM he was no political strategist.

With the Minority Movement struggling to find a balance between working with left union leaders and mobilising unofficial action, perhaps more was required.

The reality was that Mann, both a union leader and an advocate of militant action, straddled this contradiction. 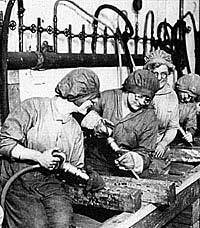 Rose Smith — a woman Communist at the heart of the struggle