…and it’s not just at Eton

This article is over 11 years, 0 months old
Paul Foot, who went to Shrewsbury public school, once wrote, "The main characteristic of the school I went to was barbarism."
Downloading PDF. Please wait...
Tuesday 25 January 2011

Paul Foot, who went to Shrewsbury public school, once wrote, “The main characteristic of the school I went to was barbarism.”

Foot explains that the brutal culture played a specific role: “To be leaders of the future it was necessary to know what it was like to be bullied in order to turn out a good bully yourself.”

Al Alvarez, a writer, went to Oundle school in the mid-1940s. “It was tough,” he says. “There were cold baths every morning and the food was awful.

“The point was to produce people to run the British empire: if you could survive five years at public school, there was nothing the Kalahari desert or Antarctica could throw at you.”

Foot remembers how the future role of the boys was drummed into them.

“‘You are the leaders of the future,’ a general bellowed at us every year as we dressed up in uniform and paraded around like toy soldiers. ‘See that you live up to it!’” 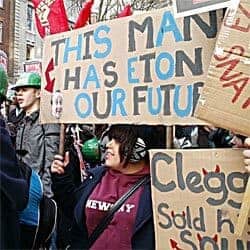