This article is over 18 years, 1 months old
'Scrounger', 'Milking our generosity', 'We are a soft touch'.
By Helen Shooter
Downloading PDF. Please wait...
Saturday 13 December 2003

‘Scrounger’, ‘Milking our generosity’, ‘We are a soft touch’.

These are just some of the headlines smearing asylum seekers that have appeared in the Daily Express. They could apply equally to the paper’s owner, Richard Desmond.

It was revealed last week that Desmond has relocated his business to avoid tax in Britain – in other words, he’s upped and offed in search of a better life.

Three years ago he registered his business in Jersey, one of the world’s biggest tax havens. The move meant he cut the tax he would have paid on profits in Britain (corporation tax) by over £2.07 million. To benefit from the lower tax rates in Jersey, Desmond has to show that his operations are based there.

Yet the small rooms above a parade of shops in the town of St Helier have just a skeleton staff. Meanwhile Desmond has major offices in London and a studio in Docklands. His tax avoidance doesn’t just mean he is not putting in money to pay for schools and hospitals. He actually took out £1.58 million last year by claiming for a tax rebate.

Both figures are dwarfed by the amount Desmond pays himself. His combined pay and pension rose to £20.98 million last year. This is more than double the £8.85 million he paid himself in 2001.

So next time you see a Daily Star or Daily Express headline attacking ‘unsavoury’ refugees, remember the unsavoury scrounger who owns the two rags.

Nothing to choose between barons

Desmond wants to expand his empire by buying up the Telegraph.

The daily and Sunday papers could come up for sale after Conrad Black, who owns the Telegraph as part of the Hollinger Group, recently resigned from the company. He was forced to go after millions of pounds that was destined for shareholders went into his pockets and those of Hollinger International’s president, David Radler.

Now the group is being broken up and the Telegraph may be sold off. Desmond is one of the media vultures hoping to grab the paper. It would mean concentrating the national press in the hands of even fewer media barons. His papers already account for around 14 percent of the national newspapers. The Telegraph group has around 7.5 percent. If Desmond gets his hands on it he could rival the 23 percent of the market controlled by Trinity Mirror.

So Rupert Murdoch, Trinity Mirror bosses and Desmond would dominate around 80 percent of the national press in Britain. Desmond would also tighten his hold on West Ferry Printers, Europe’s largest broadsheet printing plant. He already has a 50 percent stake in it-the other 50 percent is held by the Telegraph Group.

His rivals, Associated Newspapers which own the Daily Mail, also hanker after the Telegraph. Associated’s owners, the Rothermere family, have registered the group’s ultimate holding company in Bermuda, another tax haven. Michael Green, former chairman of Carlton Communications, and Andrew Neil, publisher of the Scotsman, also want the Telegraph.

Whichever one gets it, the result will be fewer millionaires controlling more of the media, which will be pumping out the same propaganda about, for example, the wonderful choice and freedom capitalism has to offer.

Blunkett does it without even making a profit

HOME SECRETARY David Blunkett doesn’t wait for an Express diatribe before announcing yet more policies against refugees and immigrants.

He wants to slap a £500 charge on migrants who come into Britain each year to work, study or join their families. New Labour claims this is ‘fair’ because the migrants get a ‘windfall gain’ from being allowed to work in Britain.

This is despite the fact that, as the government was forced to acknowledge recently, migrant workers are keeping the NHS running. They are doing the low paid, low status jobs that few in Britain are clamouring for. And research last year showed immigrants of all kinds make a net economic contribution of over £2 billion a year.

The £500 would be on top of the £125 for work permits that the government is already phasing in. The current charge is £95. New Labour admits it is just about ‘raising revenue’. It is likely to force people fleeing poverty to resort to risking their lives to get into Britain illegally to avoid paying £625.

Blunkett wants to sneak all this through in the small print of his immigration and asylum bill, which gets its second reading in the House of Commons next week. He also wants refugees who suffered torture and rape to be restricted to no more than five hours with a legal aid lawyer to explain those experiences. He aims to axe legal aid altogether for some refugees. Refugees who arrive in Britain without travel documents will automatically be viewed as criminals and face charges.

Blunkett is already under fire over his plan to take refugee children away from their parents to force them to leave Britain. Even the right wing Times newspaper has said, ‘The idea of forced separation makes many people feel deeply uncomfortable and rightly so. He should abandon it.’

The Daily Mail called it ‘a step too far’. 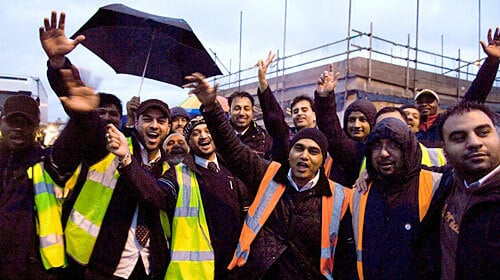 How can we build struggle in Britain?

‘The situation is far worse than the media show’

Taxing time for the bosses ahead