Anti-Nazi fighters who were left to fight alone

This article is over 17 years, 5 months old
The Second World War was even more barbaric than the First. If one country felt that barbarity more than any other, it was Poland.
By Colin Barker
Downloading PDF. Please wait...
Saturday 14 August 2004

The Second World War was even more barbaric than the First. If one country felt that barbarity more than any other, it was Poland.

Hitler invaded from the west in the late summer of 1939. Days later Stalin—as part of his accord with Hitler—marched in from the east. Hundreds of thousands of “disloyal” Poles were deported eastwards. Stalin murdered thousands of Polish army officers at Katyn.

The Hitler-Stalin Pact lasted two years. Poland suffered the misery of Nazi occupation until the Red Army returned in 1944.

Its resources were robbed, its people enslaved and murdered. In 1942 the Nazis began applying “the final solution” to Poland’s Jews. Of 2.7 million Jews in Poland in 1939, only 50,000 survived the war. Most died in the gas chambers of Treblinka and other death camps.

From the moment of Poland’s conquest, popular resistance began. The underground Armia Krajowa (Home Army) had tens of thousands of poorly armed but enthusiastic partisan fighters.

In 1943 the Jewish ghetto, faced with its destruction, rose up in one of the most inspiring rebellions of our history, recorded in Marek Edelman’s The Ghetto Fights.

By the start of 1944, after their defeat at Stalingrad, Hitler’s armies were retreating across Europe. In January Russian forces crossed the eastern borders of Poland’s former territories.

Partisan forces in eastern Poland met Russian army units, to be faced with a blank choice—submit to Russian command or be arrested.

The Home Army had one last political card to play. It could mount an uprising in the capital, Warsaw. Timing was crucial. It had to begin as the Germans were retreating, and it had to be fought on a massive scale—to show the world the Home Army’s fighting ability and readiness to assume government.

By late July Russian forces approached the eastern bank of the Vistula, Warsaw’s main river. German occupying forces were visibly panicking, with columns marching out to the west. Now, surely, was the moment for the Polish insurgents to strike.

If they needed further encouragement, the Russians themselves urged them on. In radio broadcasts Moscow summoned Warsaw’s people to take up arms.

However, at the very moment that the Home Army command issued its call for the uprising, the Nazis counter-attacked. The Russian advance was halted some miles from the Vistula.

But the uprising had begun, at 5pm on 1 August.

Some 40,000 insurgents attacked German positions. They were very poorly armed, with almost nothing but light weapons, and not enough bullets. The Home Army troops were mostly young men and women, often teenagers.

The city’s population rallied behind them, building barricades against the Nazi tanks. They organised soup kitchens and improvised hospitals. Polish flags flew proudly from liberated buildings. A free press emerged, including socialist papers.

The insurgents made gains in the first five days. Then the German army brought up new forces and counter-attacked.

Overwhelmed by superior firepower, the insurgents fell back. The Nazis engaged in mass executions of men, women and children. They herded civilians in front of their tanks as living shields, even forcing women to lie on top of each other in a living barricade across the street.

The last fighters in the Old City were compelled to leave through the sewers—a terrifying epic celebrated in Wajda’s great film Kanal.

The insurgency lasted for 63 days, and a military surrender was finally negotiated in early October. More than 200,000 Poles had perished. Another half a million were forced out as refugees. This small city had experienced more than the equivalent of a 9/11 every day for over two months.

As an act of revenge, Hitler ordered the dynamiting of every remaining building in the city.

The Warsaw Uprising was the greatest urban insurgency of the 20th century. Its defeat was not due to Polish romanticism, as critics have alleged, but imperialist interests.

Warsaw need not have fought alone.

The Russians could have done much more to support the fighting Poles.

They could have flown in significant supplies. They could have sent up fighter aircraft from nearby airfields, denying the Nazis a clear sky from which to bomb and strafe the city. They could have granted landing and refueling rights to British and US planes wanting to make parachute drops.

Stalin only permitted this once, in mid-September, when it was too late.

Instead the Russians denied the uprising was happening.

Then, when it was being massacred, Stalin denigrated the insurgency as the action of “criminals”.

“We are responsible for the conduct of the war in Poland, we are the force that will liberate the whole of Poland… [The Home Army] have butted in like the clown in the circus.”

Stalin never wanted the Poles to liberate themselves. His aim, negotiated with Britain and America, was to build his own empire in Eastern Europe at the end of the war. Churchill and Roosevelt did not want to antagonise their wartime ally.

The uprising was written out of official Polish history. Not till 1989, when the Poles finally freed themselves from Russian control, was a monument to the uprising finally erected in Warsaw.

For more information on the Warsaw uprising go to www.warsawuprising.com 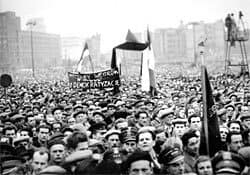 Voices from Poland’s left: ‘We must organise working people or remain on the margins’