This article is over 13 years, 0 months old
Amid growing anger at the bankers, Anindya Bhattacharyya and Sadie Robinson look at the role of banks in the wider economy and trace the origins of the crisis
Downloading PDF. Please wait...
Tuesday 27 January 2009

It’s difficult to believe that bankers could become even less popular, but that is exactly what happened last week. Fresh from soaking up some £200 billion in emergency funds from the government, Britain’s major banks turned round and asked for more.

Once more we are told that there is no choice but to bail them out at vast public expense.

Here Socialist Worker presents a basic guide to some common questions about the banking system – including the role it has played in the current economic crisis – and asks whether there is an alternative.

What do banks do exactly?

Most people’s relationship with the banks is an individual one, based on current accounts, savings, overdrafts and other “personal financial services”.

The proportion of banking profits coming from these individual services has grown significantly over the past couple of decades. But they remain only one aspect of banking operations.

Banks also take deposits from, lend money to and provide services for businesses, ranging from the smallest firms to the largest global multinationals.

Almost all business these days is conducted on credit, with banks acting as intermediaries.

In the wake of the 1929 Wall Street Crash many governments imposed regulations on banks that forced them to separate their various activities.

The US’s Glass-Steagall Act of 1933, for instance, insisted on a clear distinction between “commercial banking” – day-to-day deposit taking and lending for individuals and businesses – and “investment banking” – the high risk, big money operations involving trading in shares and bonds on the capital markets.

But these precautions have been steadily removed over the past 25 years as part of the neoliberal rush towards “deregulation” of financial services. Glass-Steagall was finally repealed in the US under Bill Clinton’s administration in 1999.

At the same time that workers’ wages have been held down to boost profitability, personal finance has been “deregulated” to allow banks and other financial firms to offer people credit to make up for the shortfall in their incomes.

The result has been ballooning individual debt – in the form of mortgages, credit cards and other loans – which are then repackaged as complex bonds and sold on global markets to other financial institutions.

This combination of a massive consumer debt bubble and the intricate interconnections between the lowest and highest levels of finance set the stage for the “credit crunch” of 2007. This has ripped apart banking – and taken the rest of the global economy with it.

Why are the banks in trouble?

The roots of the current banking crisis lie in the “sub-prime” mortgage market in the US.

This high-risk lending developed as mortgage companies, desperate to find new markets for their loans, began to target poor people who had previously been unable to access credit.

They charged these people rates of interest that became impossible to repay and eventually the market ran into trouble.

This didn’t necessarily affect the immediate lenders – who had taken advantage of a “secondary market” in mortgage debt and repackaged and sold on the debts to other institutions.

But this spread bad debts across the whole financial system and meant that, when the crisis hit, it was not just confined to a handful of lenders.

Banks were among the institutions that bought the debts but they were also involved in speculating on the value of them.

As it became clear that the debts were a riskier investment than previously believed, fear gripped the financial sector.

The repackaging and re-selling of the debts meant that no one was sure where the bad debts had ended up – or how significant they would be.

Banks stopped lending to each other because they didn’t have the confidence that they would get the money back – creating the “credit crunch”.

Financial speculation has deepened the crisis. As investors and traders lost confidence in their bets, they moved their money elsewhere, creating panic.

Ultimately the current crisis is symptomatic of a more structural problem of capitalism. As profitability – the rate of return on investments – declines over time, the bosses are constantly pushed to look for new ways to make money.

This, together with the competition at the heart of the system, means that short-term concerns over maximising profits are often put before the long‑term health of the system.

Are the bankers to blame for the economic crisis?

Many people are rightly outraged that the blind greed of the banking bosses has sparked a massive economic crisis that threatens the livelihoods of ordinary people the world over.

But this outrage is by no means confined to the left or the working class. The right wing Daily Telegraph recently ran a comment article titled, “We have every right to be angry with the bankers.”

The Financial Times has been even more blunt, running a column by Philip Stephens headlined, “Shoot the bankers, nationalise the banks.”

Socialists share the anger towards a section of the ruling class that has brazenly profited at the expense of ordinary people. But there is more to this than meets the eye.

There is a long tradition of attempts to blame the problems of capitalism on banking and finance. This is often coupled with the argument that capitalism can overcome its contradictions if only the financial sector was suitably restrained or regulated, or even abolished altogether.

Typically these arguments counterpose an allegedly healthy “real economy” on the one hand and a parasitic finance system on the other – locating the problems of capitalism in the sins of the latter, be it greed, speculation or stupidity.

These arguments miss the way the development of finance is connected to the wider capitalist system.

The first financial institutions in the City of London, for instance, were insurance firms that serviced merchants transporting goods by sea.

In recent years investors have poured their funds into finance precisely because of the sluggish rates of profit found in rival sectors such as manufacturing.

But banking and finance is ultimately unproductive – these companies simply redistribute the profits made by capitalists rather than producing any new wealth. So a boom in finance can delay the onset of crisis, but it cannot ultimately avoid it.

What we are now witnessing is a crisis of the entire capitalist system – it is not something that can be blamed solely on banks, nor can it be fixed by even the boldest of changes to banking regulations.

Should we bail out the banks?

Many people are rightly asking why it is that the government can find billions to prop up the financial system but sits back while people lose their homes, jobs and pensions.

The bailouts are not the answer to the crisis. As the economic problems have developed over the last year and a half, we have been told time after time that the latest state intervention will solve the crisis. So far none of them have.

The US, Britain and other states have injected massive amounts of public money into the system, so that banks can borrow cheaply.

But there are limits to how much they can do this – the scale of the debts is now larger than the output of the entire world economy.

And there is no guarantee that pumping money into the system will achieve anything. The US government attempted the same thing after the Wall Street Crash of 1929, yet the recession continued.

The aim of the bailouts is to encourage banks to start lending and investing again. But there is no guarantee that they will do so – or that companies would take up the credit.

If Nissan could suddenly get more credit from a bank than it could yesterday, will it decide to take it up and invest to increase car production? Of course not – because it knows that the cars would pile up unsold and it wouldn’t be profitable to expand investment.

This is not to say that governments should simply let banks go to the wall. But there is another option – the government could take over the banks and run them under public control.

Governments are bailing out the banks to try to prop up the system – not to help workers.

We should demand measures that help ordinary people, not the bankers – banning home repossessions, nationalising companies that are threatening to cut jobs or hours, and guaranteeing pension schemes.

We should also remember that the crisis is not an aberration caused by irresponsible bankers – it is part and parcel of the logic of capitalism. 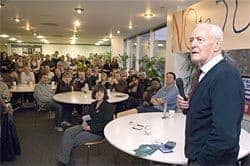