This article is over 12 years, 4 months old
There is another "common sense" belief that has been at the heart of much discussion on the environment for many years – that there are simply too many people on the planet.
Downloading PDF. Please wait...
Tuesday 15 September 2009

There is another “common sense” belief that has been at the heart of much discussion on the environment for many years – that there are simply too many people on the planet.

Leading environmentalist and adviser to Gordon Brown, Jonathan Porritt, is a patron of the Optimum Population Trust (OPT). He believes that “each individual is responsible for their own carbon footprint”.

The trust argues that Britain’s population needs to drop to 30 million – the level it was at in the late 19th century. Other environmentalists, such as David Attenborough and James Lovelock, are also patrons of the trust.

Groups like the OPT believe that by simply reducing the world’s population we can create a more sustainable society.

It is an idea that informs government thinking at the highest level. Immigration minister Phil Woolas believes that, “You can’t have sustainability with an increase in population.”

The argument echoes the ideas of the 18th century writer Thomas Malthus, who believed that growth in population would inevitably outstrip available food supply.

In particular, Malthus believed that the “lower orders” were primarily to blame, being too inclined to have children.

Malthus’ ideas have no basis in science. Britain for instance comfortably contains a population far in excess of that which Malthus believed would lead to mass starvation.

Improved science and agriculture have enabled us to produce far more food than ever before.

Rather than living in a time of shortages, the United Nations Food and Agricultural Organisation points out that there is 15 percent more food today per person than there was 20 years ago.

Recently it has shown that the total amount of land for crops in the world could be more than doubled.

When the great revolutionary Frederick Engels criticised Malthus, he turned the argument on its head. Rather than asking why people are hungry, he wondered why there isn’t enough food produced.

“Bourgeois society does not and cannot wish to produce any more. The moneyless bellies, the labour which cannot be utilised for profit and therefore cannot buy is left to the death-rate.”

Capitalism had introduced gigantic steps forward in production. More food could be produced than ever before, yet if you didn’t have any money, you starved.

There are more than enough resources to meet the needs of everyone on the planet – and there is the potential to revolutionise production and the way we organise society to do this in an environmentally sustainable way.

The priorities of the system stand in the way of doing this, not a growth in population. 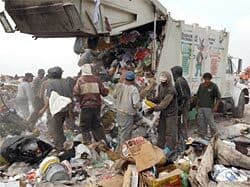 Climate change: are people part of the problem?

Is there an alternative to how things are run?