Are we going back to the 1930s? The economic similarities

This article is over 14 years, 3 months old
Anindya Bhattacharyya analyses similarities and differences between the crisis then and today
Downloading PDF. Please wait...
Tuesday 25 March 2008

The Wall Street Crash of 29 October 1929 has entered the popular imagination as the key example of a crisis in the financial system.

And while we might not quite be at the point today where bankers are throwing themselves out of skyscraper windows, there are enough similarities between then and now to see why financiers on both sides of the Atlantic are breaking out in a cold sweat.

The chief similarity is in the role of credit in intensifying the crisis. During the 1920s the US was at the centre of a massive economic boom.

Capital from all over the world flowed into US industries through the medium of the New York stock exchange.

The result was rising share prices on Wall Street. Investors started buying shares on tick, with brokers effectively lending the money to buy shares in the hope of being paid back by future profits.

But when the crash occurred, the credit mechanism went into reverse. As share prices fell brokers demanded their loans back. Investors sold their shares to pay back the loans – thus ensuring share prices fell further.

The result was a vicious cycle. “Each spasm of liquidation therefore ensured that another would follow,” wrote the economic historian JK Galbraith.

Soon the crisis had burst out of the financial markets and created a fire-sale in the wider US economy.

The Wall Street Crash was a particularly acute symptom of wider underlying problems in the world economy that had been building up over the previous few years.

The huge flows of global investment into the US were concentrated mainly in heavy industry, and this sector was already gripped by a slump two months before the crash hit.

Like the 1920s, the economic growth we’ve seen in recent years in the US and Britain is built upon a credit bubble – though today firms obtain much of their finance through bank loans and bond issues rather than through stock markets.

As bonds fall in value, so called “leveraged investors” that have borrowed money to gamble on bond markets are being asked by their creditors to stump up more cash.

Just as in 1929, they raise this cash by selling their bonds – thus pushing prices down yet further.

The result has been a wave of hedge funds going bust, which in turn undermines the banks that lent money to them.

The use of credit to buy consumer goods – and so help to generate profits to boost the economy – is another parallel between 1929 and today.

But in the 1920s credit facilities such as hire-purchase were only available to the richest. The top 5 percent of households accounted for one third of total consumer spending.

But today widespread consumer debt is at massive levels. Real wages have been more or less stagnant, so people have had to get into debt in order to buy consumer goods, or even just to make ends meet.

The average household debt in the US is now almost equal to disposable income.

The latest estimates suggest households in Britain have run up a total of £1,400 billion in debt – some £225 billion on credit cards and personal loans, the rest being in mortgage loans.

And unlike in previous decades, this consumer credit bubble has been engineered as a necessary measure to keep the economy growing.

Companies don’t want to raise wages and won’t accept lower profits. So a credit bubble centred around housing is the only means left to encourage people to buy stuff.

That is one reason why the current credit crisis has sent the ruling class into a panic.

On the one hand it wants to control credit more tightly and only lend money to those who are likely to repay.

But on the other hand, such a credit squeeze would dampen demand for consumer goods and threaten to send the whole economy into recession. We could see a repeat of the dynamic that took place in 1929.

A crisis that breaks out in one financial sector – US stocks in 1929, the US subprime mortgages today – spills over into other financial markets, then freezes up the financial system more generally, before bleeding out into the “real economy”.

The threat of systemic freeze is already here. Fears of bad mortgage debt have led to banks refusing to lend money to each other – the so called “credit crunch”.

This crunch was what brought down Northern Rock last year and was a major factor behind the fall of US bank Bear Stearns. It is why the Bank of England injected £5 billion in emergency loans to banks on two separate occasions last week.

Of course today’s crisis won’t necessarily pan out in the same dramatic fashion as the 1930s recession.

A banking crisis in Japan in the early 1990s led to slow burning recession that gripped the country for a decade.

But like the crisis of the 1930s, today’s financial turmoil is a reflection of deeper problems in the economy – in particular a long term crisis of falling profit rates.

The capitalist class has tried a number of ways to escape this problem – making workers work harder, looking to the dotcom boom and more recently through the expansion of finance and credit. None of these can resolve the underlying problems in the economy.

And credit acts as a double edged sword in this situation, as Karl Marx noted in the third volume of his book Capital:

“The credit system accelerates the material development of productive forces and the establishment of the world market.

At the same time, credit accelerates the violent eruptions crises and thereby the elements of disintegration of the old mode of production.” 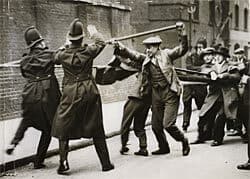 Are we going back to the 1930s? A decade of political polarisation