Argentina after the revolt-what next?

EVERYONE IS wondering what will happen next in Argentina. It is a country where everybody is talking politics. Fifteen weeks ago a popular uprising overthrew the president, De la Rua. His successor was forced from office a week later. Since then the country has been run by a coalition of the two traditionally powerful parties, the Peronists and the Radicals. The coalition is presided over by the Peronist Duhalde. But this has not brought stability. Argentina has been hit by an economic crisis not experienced by any industrial country since the 1930s.

Official unemployment is 22 percent and rising. On the high streets every sixth shop has a ‘Liquidation’ sign in the window. Each day over the last year 2,400 people have fallen below the poverty line. Another 1,200 people have been forced into absolute poverty. At the same time prices have risen by around 30 percent in the last two months alone.

Some 400,000 people with private health insurance are now forced to rely on the public health system, which is on the verge of cracking up. Meanwhile 20 percent of people have money in the bank that the government won’t let them withdraw. Virtually every day there is a panic over something. One day the rumour spread that the value of the peso against the dollar was sliding. Thousands of people queued all night to try to change their money, with fights in some banks.

Another day it was rumoured that the unemployed had started looting supermarkets in Buenos Aires.

THE GOVERNMENT is relying on a deal with the International Monetary Fund to ease the economic crisis and bring some stability. Better off sections of the middle class are allowed access to their bank accounts by the government to retain its support.

By providing social security benefits the Duhalde government wants to make it easier for the corrupt two major union federations to keep up supporting it. But the IMF, acting under US orders, will not make a deal. The IMF is demanding that Duhalde imposes further spending cuts by destroying the jobs of 400,000 public sector workers. The government fears this will shatter any remaining support for the two parties.

More cuts could force unions into at least token opposition, and unleash a wave of lootings like those which triggered protests last December. The government is deeply unpopular. One poll showed only 30 percent of people supporting the once powerful Peronist party.

BY CONTRAST, another poll showed that nearly half the population of Greater Buenos Aires see the popular assemblies as a way forward. The assemblies sprang up across the city, formed by activists involved in the great demonstrations of December and January. They are linked in with the piquetero activist movements of the vast unemployed.

The assemblies are not soviets or workers’ councils. They are not delegate bodies directly representing the 15 million people of Greater Buenos Aires. But they do exist in 80 or 100 neighbourhoods. In these areas 50 to 100 people meet each week to discuss how to carry the movement forward.

They try to tackle the problems besetting the population – problems of unemployment, hunger, the near collapse of health facilities and rising prices. Weekly meetings bring the city’s assemblies together and a national ‘assembly of assemblies’ was held three weeks ago. The demonstrations are smaller and generally less frequent now. People began to feel they were not achieving a great deal. There were rumours of the right seizing its chance to establish a ‘military-civil government’.

The official armed forces newspaper argued a military dictatorship could ‘restore order’ and end the crisis. But the continuing strength of the mass movement was shown on 24 March with a huge demonstration of at least 120,000. It was to mark the 26th anniversary of the military coup of 1976 and the terror that followed.

Assemblies allow the core of the movement of December and January to organise themselves independently of the ruling class and the old political structures. This is important in a country where Peronism marginalised the left. The memory of 30,000 deaths during the dictatorship of 1976-83 is still strong. Now there is a growing ferment of discussion and action.

Informal groups discuss what can be done, how society can be changed and the possibilities of having a real revolution. An assembly I attended decided to initiate a formal discussion about the question of ‘power’ and how to get it.

THE LEFT is growing. Left activists play a key role in all the movements. It is taken for granted that the assemblies stand for the nationalisation of the banks. Everyone accepts demands for the renationalisation of the privatised industries and repudiation of the foreign debt as an ‘illegitimate’ heritage of the military regime.

But the left itself is deeply divided. There are necessary disagreements between those who believe change is possible through reform and those who believe in revolution. While some believe in pressurising the existing government, others say it is ‘illegitimate’ and has to be overthrown. These disagreements mean that there are two rival national groupings of the piqueteros.

One group has around 100,000 supporters, and they are prepared to negotiate with the government. The other group, with around 15,000 supporters, rejects any such approach. There are also significant political groups who believe the main aim is to maximise votes for the left in next year’s elections.

BUT THE workers need resistance to government and IMF measures now, not in a year’s time. Poverty is increasing by the day. There is a danger that this will result in widespread demoralisation. This will allow the right and the military the chance they want. The threat is increased by the behaviour of the trade union bureaucracies. Leaders of two union federations linked to the Peronist party back the government.

Unions have been successful in keeping employed workers from participating in the movement as an organised force, although thousands of individuals and some important local unions have been involved. The government is desperately hoping it will not have to confront the strength of the working class.

Workers staged half a dozen general strikes in as many years against government deals with the IMF that impoverish union members. The revolutionary left needs to win the arguments with those who believe in reform.

The 8,000 to 10,000 people who go to the Buenos Aires assemblies each week and the 100,000 or so people they can mobilise on the streets cannot achieve revolutionary change alone. They need to win the millions of people to their side. The revolutionary left is growing in influence.

Its approach fits with the spontaneous slogan, ‘Get rid of the lot’, directed against all the old parties, the bankers, the industrialists and the union bureaucrats. But the revolutionary left is deeply damaged by its own internal divisions. There are four important revolutionary organisations and a score of minor ones. Many of these behave in a sectarian way to the others. There have even been cases of left groups fighting with each other on demonstrations.

I heard people who believe the only hope lies with the left ask, ‘But why are they so divided?’ Most of the revolutionary groups also lack any real understanding of how to take on the arguments of people influenced by the talk of reform.

THERE IS little understanding of the tactics of the united front-the idea of forging unity around immediate demands and proving in practice to supporters that direct revolutionary action is the only way forward. There is a feeling in Argentina at the moment, among all sections of society, that people are living in a lull between two enormous storms.

It is believed that the next one will be bigger and more violent that the last. Millions of people are caught between exhilaration over what they achieved in December and deep worries about the worsening economic crisis.

It is up to the revolutionary left in Argentina to rise to its responsibilities. Socialists have to work to unify the massive forces pushing to the left. In this way the left will deepen the roots of the movement and show in practice that revolutionary change from below offers an alternative to mass impoverishment, mass demoralisation and the repressive dreams of the right. 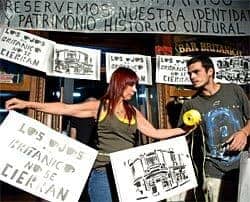 Argentina: under no management

Argentina: what does the election result mean?

Surge in protests hits the cities