This article is over 17 years, 2 months old
There was an electric atmosphere at the launch meeting of the Asbo Concern campaign in central London on Thursday of last week.
Downloading PDF. Please wait...
Saturday 16 April 2005

There was an electric atmosphere at the launch meeting of the Asbo Concern campaign in central London on Thursday of last week.

The hall was full to bursting as 180 people packed in to voice their anger at the way Asbos are being used. The launch brought together a huge range of people.

Youth workers, social care professionals, academics, council workers, charity workers, lawyers, people served with Asbos and their families all attended — there was even a magistrate.

From the platform, Shami Chakrabarti, director of human rights campaign Liberty, said, “Asbos don’t help and they don’t work, even when they’re made on criminals.”

She linked the sweeping banning powers of Asbos and anti-terrorism measures such as control orders — with the erosion of the right to a fair trial a feature of both.

Shami also attacked the “demonisation” of children that has been part of the government’s crackdown.

Harry Fletcher, assistant general secretary of the probation officers’ union, Napo, said, “Napo accepts that anti-social behaviour is a significant problem, but we also argue that cases are complex.

“Individuals involved with anti-social behaviour are not easy — but the solution should not be simplistic.”

Diane, who suffers from Tourette’s syndrome, which can cause people to swear or shout out involuntarily, and Asperger’s — a condition on the autism spectrum — spoke from the floor.

She said, “I’ve been Asboed. A condition of my Asbo says I can’t do the behaviour typical of my disability — so I can’t get out of the Asbo. This is totally outrageous.” 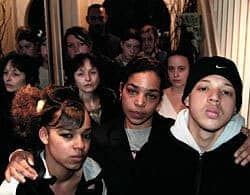 Asbos: why they’re part of the problem