US presidential hopeful Barack Obama presents himself as a successor to civil rights leader Martin Luther King, but his campaign is a far cry from the radicalism of King.

Obama owes one important debt to King’s movement – the very fact that a black politician is considered a possible candidate for US president is due to the legacy of the struggle for civil rights and the doors that it opened for a small layer of black people in the US.

Obama’s campaign has certainly tapped into a real mood for change in the US. Exit polls from Democratic primaries and caucuses show that he has gained widespread support among women, the poor, young people, black people and immigrants – many of whom have never voted before.

On his website he calls for people not just to believe in his power to change things, but to believe in their own power. He has also talked, in terms unprecedented for a presidential contender, of the racism in the US.

Yet while Obama may have something of the style of King about him, he has none of the content.

Obama is unequivocally committed to the Democrats’ pro-business agenda. On all central issues his politics are identical to those of his rival Democrat Hillary Clinton.

Despite boasting of nearly two million individual donors who have given to his campaign, Obama still relies overwhelmingly on corporate donors and wealthy fundraisers.

He has raised around $140 million so far for his campaign, and much of this has come from the financial elite.

More than 17 of his major fundraisers are heads of hedge funds or private equity firms. One of those who joined his team early on is Kenneth Griffin, the second highest paid hedge fund manager in the US.

Obama has attempted to align himself with the majority of the US population who are against the war in Iraq, pointing out that he opposed the war in Iraq from the beginning.

But unlike King, who by the end of his life was an uncompromising opponent of US imperialism, Obama opposes the Iraq war not on principle, but because it is “unwinnable”.

Obama has repeatedly voted in the Senate to support George Bush’s calls for unlimited funding for the occupation. He has also called for more troops to be sent to Afghanistan, supports the possibility of military action against Iran, and backs Israel.

Obama is caught in a contradiction – appealing to a mass base that wants and desperately needs change, but at the same time taking care to appear “electable” and reassuring his business backers that he will not rock the boat.

So he has spoken out against racism, yet also attacked his former pastor Jeremiah Wright’s more radical views on racism and imperialism.

He said they were “a profoundly distorted view of this country – a view that sees white racism as endemic; a view that sees the conflicts in the Middle East as rooted primarily in the actions of stalwart allies like Israel, instead of emanating from the perverse and hateful ideologies of radical Islam”.

On class he has argued that the problem for “blacks and Latinos is not fundamentally different from what ails their white counterparts – downsizing, outsourcing, automation, wage stagnation, the dismantling of employer-based healthcare and pension plans”.

Yet he has also gone on record supporting attacks on welfare. Obama writes in his 2006 book, that “we should acknowledge that conservatives – and Bill Clinton – were right about welfare as it was previously structured”.

The reference to Clinton and his 1990s welfare “reforms” is significant. Obama’s policies are inextricably linked to the Democratic machine and to big business, rather than to any radical movement.

If Obama becomes the Democratic candidate there will be enormous pressure on the left to accept the Democrats for all their faults.

Each move in that direction makes it harder to build a left wing movement. This is exactly the kind of pressure that 1960s leaders, including King, resisted.

In his last years, King terrified the US’s rulers. There is no evidence that any element of US capital is scared at the idea of an Obama victory.

The situation for ordinary people in the US cries out for radical change. The US economy has survived over past decades by making people work longer and harder.

Workers have struggled to make ends meet – and propped up the economy – by living off credit.

Now the poor are paying the price for the financial crisis. There have already been 1.5 million homes repossessed in the US last year and two million more are expected over the next year.

Racism is a daily reality. Unemployment for black workers is more than twice that for white people.

One in nine black men in the US between the ages of 20 and 34 is in prison – compared to one in 30 in the population in general.

Only a movement that is willing to challenge the system, rather than accommodate to it, can tackle such fundamental inequalities. 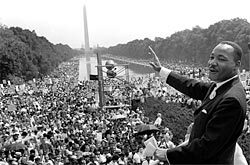