Battles to create a socialist society

This article is over 13 years, 3 months old
In the last part of our series Matthew Cookson explains how Marx’s ideas were shaped by his experience of workers’ struggle
Downloading PDF. Please wait...
Tuesday 14 October 2008

The ruling class attempts to portray Karl Marx simply as a thinker – someone who analysed capitalism but did little to bring about revolution.

But Marx’s activity in the International Working Men’s Association (IWMA) in the 1860s and 1870s shows how false this picture is.

In 1864 a number of prominent trade union leaders in London called for an international meeting of workers’ representatives to explore the possibility of united campaigns across borders.

These same union leaders held a mass rally in London in 1863 in support of the Northern states fighting to abolish slavery in the American Civil War.

They invited Marx to attend the new meeting and he readily accepted.

This expressed Marx’s desire to ensure that the IWMA was an organisation devoted to the overthrow of the capitalist system from the bottom up.

With Marx at the fore, the IWMA raised money for strikes across Europe, supported the Irish struggle for freedom and the fight for women’s rights, and raised international solidarity among working people.

This activity led to its rapid growth in a number of countries, frightening the ruling classes.

The IWMA’s biggest test came in 1870 and 1871. Louis Bonaparte, France’s ruler, declared war on Prussia in July 1870 in an attempt to crush a new rival to France’s dominance on the European stage.

France was defeated, and by September Bonaparte was captive and a government of national defence had declared a republic. This government, led by reactionaries such as Adolphe Thiers, set out to negotiate peace with Prussia.

The new government and the city’s wealthy abandoned Paris and decamped to Versailles. The Prussians laid siege to the capital, which was defended only by the National Guard, a militia composed mainly of workers.

The French government’s attempt to seize the National Guard’s cannons on 18 March 1871 provoked a revolt.

A new government of workers and the poor was declared – the Commune. It held power for two months in the face of the deep hostility of the French, Prussian and other ruling classes.

The Commune was an inspiration to workers everywhere. Marx and the IWMA flung themselves into defending it.

But the French government brutally crushed the Commune, slaughtering tens of thousands of Communards.

Marx wrote The Civil War in France to analyse the Commune’s achievements. The Commune’s very existence proved Marx correct – workers could take power and organise society in a new way.

Workers created their own institutions, such as a people’s army and a ruling committee composed of directly elected, instantly recallable delegates.

Following the defeat of the Commune, a debate broke out over the direction of the IWMA.

Trade union leaders believed the IWMA’s radicalism hurt their chances of getting elected to parliament, while anarchists such as Mikhail Bakunin were opposed to the IWMA’s open way of organising.

Marx opposed both these groups. He believed that only a revolution involving the majority of workers could liberate humanity.

The IWMA, with Marx’s support, voted to transfer its headquarters from London to New York to protect it from the “disintegrating elements”. This was effectively its end.

Marx spent the remainder of his life attempting to complete his study of capitalism. He continued to be involved in building socialist organisations, particularly in Russia and his native Germany.

He died in 1883, admired by millions of workers around the world for his contribution to their struggle.

As Marx’s lifelong collaborator Frederick Engels said at his funeral, “Marx was before all else a revolutionist.

“His real mission in life was to contribute, in one way or another, to the overthrow of capitalist society and of the state institutions which it had brought into being, to contribute to the liberation of the modern proletariat.”

Karl Marx’s analysis of capitalism and his belief in the power of ordinary people continue to give inspiration to people fighting back today. 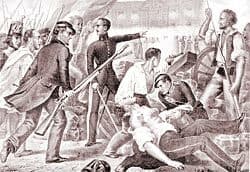 Karl Marx: interpreting the world in order to change it

Contradictions at the heart of capitalism