This article is over 12 years, 8 months old
The High Court in Belfast last week refused to order the eviction of the occupying Visteon workers in the city.
Downloading PDF. Please wait...
Tuesday 28 April 2009

The High Court in Belfast last week refused to order the eviction of the occupying Visteon workers in the city.

A legal attempt to remove them was due to be heard in court on Friday of last week.

The court was adjourned until Wednesday of next week after the judge said that the workers needed more time to organise their case against eviction.

Two hundred workers have occupied the factory for over four weeks.

The workers held a protest outside the court during the hearing.

Potential issues around the lease and whether it covered the whole site were also raised.

“We are focusing on the occupation,” said Charlie Maxwell, deputy convenor of the Unite union at Belfast Visteon. “We do our job best by doing that, and let the powers that be worry about the law.

“We need Ford to come back and reopen this plant. It orchestrated a campaign to run down our factory – it’s up to it to reopen the plant.

“There is no point the High Court or anyone else coming for us because we are conduits for a whole community and we are simply spokespeople for working class action.

“The solidarity has been fantastic. We have sent delegations to the Enfield and Basildon plants and to visit people occupying schools.

“People should never be afraid of militant action.

“We wouldn’t have got this far if it wasn’t for taking action.”

Michael Dornan, a bus driver from Belfast who is the chair of the bus workers’ section of Unite in Northern Ireland, spoke to Socialist Worker about why bus workers in Belfast stopped work in solidarity with Visteon workers last month.

“We came out in support of workers’ rights,” he said. “Our union has members in Visteon as well as in places like Bombardier and Nortel – who are all facing redundancies.

“We wanted to show our support for everybody facing job losses.

“We are currently facing up to 75 redundancies. We worked through the Troubles, where we were shot at and bricked, and now we are being faced with redundancy.

“We want our local politicians to show some responsibility and keep workers in employment.

“They hand over thousands of pounds of taxpayers’ money to companies that then just leave the country. They need to take action to defend jobs.” 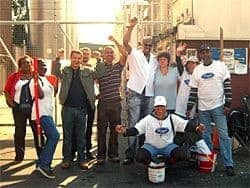