This article is over 17 years, 2 months old
In 1968, the civil rights movement changed the face of politics in Northern Ireland. It sprang up to challenge the discrimination against Catholics — which was rife in housing and employment — and the loaded electoral system that allowed only ratepayers to vote in local elections, while business owners got extra votes.
By Chris Bambery
Downloading PDF. Please wait...
Saturday 16 April 2005

In 1968, the civil rights movement changed the face of politics in Northern Ireland. It sprang up to challenge the discrimination against Catholics — which was rife in housing and employment — and the loaded electoral system that allowed only ratepayers to vote in local elections, while business owners got extra votes.

The chief demand of the civil rights movement, in the language of the time, was “one man, one vote”.

Bernadette McAliskey — then Bernadette Devlin — joined the first civil rights march from Coalisland to Dungannon in August 1968. The march could not enter Dungannon town centre because a Unionist mob had seized the area, with police support.

In October she journeyed to Derry to join the second major civil rights march, which was banned by the Unionist regime running Northern Ireland. TV footage of police batoning peaceful civil rights demonstrators off the street sent shockwaves round the world.

Derry was a city with a Catholic majority but electoral boundaries were devised to give the Unionist minority permanent control of the council in Northern Ireland elections.

On New Year’s Day 1969, PD organised a march from Belfast to Derry, modelled on Martin Luther King’s civil rights march from Selma to Montgomery in the US. From start to finish it was attacked ferociously by police and Unionist mobs.

In February, the Unionist prime minister Terence O’Neill resigned. Bernadette stood for PD in the Northern Ireland wide election that followed, winning the highest vote among the eight PD candidates.

That paved the way for her to stand as a unity candidate in a Westminster parliamentary by-election two months later.

She beat the unionists to become the MP for Mid-Ulster.

Within weeks Bernadette was addressing open air meetings in London — at the Fulham hospital building site and the CAV-Lucas plant in Acton, west London — calling for support for the civil rights movement.

In June 1969 she addressed a packed meeting in Dagenham attended by “large numbers” of workers from the Ford plant.

For the next five years Bernadette appeared on picket lines and joined anti-racist demonstrations across Britain, making the connection between the fightback here and that in Ireland. She travelled to New York to show her support for the Black Panthers.

On May Day 1969, she told Socialist Worker, “I stand for a socialist workers’ republic. That’s what we mean by the slogan ‘Tories Out, North and South’.” She added, “I’m against all repressive laws which attack my people — the poor, the workers and small farmers, British or Irish, Catholic or Protestant, black or white.”

In August 1969 Northern Ireland exploded when police laid siege to the Catholic Bogside area of Derry, saturating the area with riot gas.

The people threw up barricades and used petrol bombs to beat them back. Bernadette was pictured in the frontline of the resistance — a stance that saw her jailed a year later.

Bernadette was addressing the crowds in Derry on 31 January 1972 when the British army’s paratroop regiment opened fire on protesters.

She later told the Widgery inquiry into Bloody Sunday, “The only clear memory I have — which I have now as I speak of it — is terror. That is all I remember, sheer terror.

“I was looking at something and yet it was happening in front of my eyes in slow motion. I could not hear myself saying two different things, and I do not know which of them I was saying out loud.”

Days later she was in the headlines once more when she stormed across the House of Commons to punch the man responsible for the death of 13 civil rights marchers, Tory home secretary Reginald Maudling.

Lindsey German, Respect candidate for West Ham, was a student in 1969

I can still remember the impact Bernadette had on my friends and myself. It was a tremendous shock to see someone — a young woman, who looked and dressed like us — being elected to parliament. She was more or less the same age as us.

Everyone was amazed that she was such a powerful advocate for the civil rights movement. She really was the voice of the oppressed Catholic population in Northern Ireland.

In west London there were a lot of Irish people and a lot of sympathy for the civil rights movement which went way beyond the Irish community. People collected money to help the Catholics burned out of their homes in Belfast in August 1969.

After Bloody Sunday, when Bernadette walked across the floor of the Commons and punched the Tory home secretary, Reginald Maudling, people were cheering. I loved it—after all she was about the same height as me and there she was going for this fat Tory!

Bernadette showed how effective even one voice could be against tyranny and injustice.’

Jim Nichol, a campaigning lawyer, was national secretary of the International Socialists, forerunner to the SWP, in 1969

Bernadette was an internationalist. She had a vision of the world that went much wider than a united Ireland, and she was actively supporting the workers struggle.

When five dockers were imprisoned in Pentonville she supported them. There was a real split consciousness with some of the men — the more political were glad she was there, but some said, “You Irish go home.”

A million people demonstrated over the Pentonville dockers — and the government backed down.

I remember some of the meetings where Bernadette spoke — we would leaflet all the Catholic churches and clubs. You would even have some nuns in the audience sometimes.

She was really very courageous — people all have convictions, but do they have courage?’ 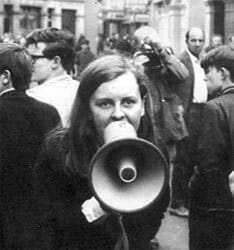