This article is over 11 years, 4 months old
Forty years ago the Jordanian army moved to crush militant Palestinians who had sought refuge in the country. Matthew Cookson looks back at a dark hour for the movement
Downloading PDF. Please wait...
Tuesday 31 August 2010

The events of Black September, which saw the slaughter of thousands of Palestinians, laid bare the treachery of the Arab rulers—and their refusal to use their power to help liberate Palestine.

On 16 September 1970 King Hussein of Jordan ordered his forces to drive the Palestinian movement from his country. He wanted to be rid of the Palestine Liberation Organisation (PLO) because he claimed it had become a “state within a state” inside Jordan.

The PLO represented the millions of Palestinian people who had been dispossessed by the creation of Israel on their homeland in 1948. Many of them had fled to Jordan and other Arab countries.

It ran its own army, guerrilla groups, civilian administration, welfare and educational organisations.

It controlled large parts of Jordan’s border with Israel, the northern towns and much of the capital, Amman, and ran things in the refugee camps.

There was widespread support for the PLO among sections of the Jordanian government and in some army units. This, and the fact that 70 percent of the country’s population was Palestinian, threatened Hussein’s dictatorship.

The Palestinian movement had been radicalising throughout the 1960s. The PLO had originally been set up by Arab regimes but was now dominated by Yasser Arafat’s Fatah organisation, which advocated militant resistance.

Israel’s crushing defeat of Egypt, Syria and Lebanon in the 1967 Six Day War had severely weakened the belief that the Arab rulers could liberate Palestine.

Israel had increased its oppression of the Palestinians when it occupied the West Bank and Gaza Strip in the same year.

But the heroic resistance of Fatah guerrillas against overwhelming Israeli force in the Jordanian town of Karameh in March 1968 made people believe that the Palestinians could liberate themselves.

Thousands flocked to join the guerrilla groups that launched attacks into Israel—strengthening the PLO whose base of operations was Jordan.

After years of oppression, Palestinians had begun to enjoy a taste of their own freedom. There was a growing mood to bring down the king and put the resistance movement in power.

But Fatah’s leaders would not act to do this. Instead, they put forward the idea that all class divisions among Palestinians and Arabs should be subsumed into the national movement for Palestine.

They wanted a movement that would pressurise the Arab rulers into confronting Israel. But this ignored the fact that the Arab regimes were linked into the system that dominated the region—that of Western imperialism.

The interests of the Palestinian and Arab masses could only be satisfied by defeating both their own ruling classes, and imperialism.

Hussein’s overthrow could have been used to destabilise all the Arab regimes. But the inaction of Fatah’s leaders was allowing him to stay in power.

Eventually, under pressure from its own activists, the demands of more left wing groups and attacks from the state, Fatah was forced to act.

It endorsed a general strike to demand that the regime organise a people’s assembly to choose a new government that would include Palestinian representatives.

King Hussein declared martial law on 15 September and launched his long-planned assault on the PLO. He was backed by the US and Israel, which promised to help eliminate the Palestinian presence in Jordan.

Arafat declared, “The Palestinian revolution will fight to defend itself to the end—until the fascist military government is overthrown.”

But his words came too late.

Despite fierce resistance, the Jordanian army murdered thousands of Palestinians and devastated much of the PLO infrastructure.

Fatah leaders believed that Syrian and Iraqi forces, which were stationed near to the fighting, would intervene to save them. But apart from a half‑hearted attempt by Syrian tanks to move to help the Palestinians, which was beaten off, the Arab rulers stood by and watched.

An Arab League meeting in Egypt on 27 September saw Arafat and Hussein reluctantly agree to end the fighting. But just hours later the ailing Egyptian leader Gamal Abdul Nasser, who had overseen the agreement, died of a heart attack.

Hussein used this opportunity to continue his assault, and his forces drove the PLO from many parts of Amman and other cities.

Over the next few months, he used Jordanian tanks, aircraft and heavy artillery to push the Palestinians into the north of the country. The final assault took place in July 1971, during which at least 3,000 Palestinians died.

Arafat and his forces evacuated the country, moving their base of operations to Lebanon. The much‑weakened Fatah learned the wrong lessons from their defeat.

It became even more insistent on its policy that the movement must respect Arab rulers. It was determined that the Palestinians should never again threaten an Arab state and suffer a defeat like that of Black September.

The PLO became more reliant on the Arab regimes and hoped to negotiate the creation of a Palestinian “mini-state” with Israel and its allies.

These policies only led to further disasters.

Then, as now, it is only the action of the Arab masses—particularly those in Egypt, the most powerful country in the region—that can free Palestine and all other countries from the influence of imperialism. 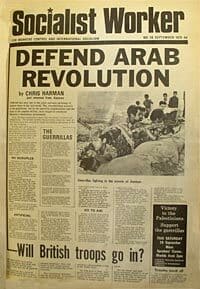 From our Archive: Reporting Black September from Amman, Jordan