This article is over 12 years, 8 months old
After the recent admission that the police killed Blair Peach, we are reposting this article from 2009 by his friend Nick Grant recalling how the tragedy unfolded
Downloading PDF. Please wait...
Tuesday 21 April 2009

Monday 23 April 1979 was a stormy day in west London. Schools were still on Easter holiday. Ealing’s arterial Uxbridge Road was strangely quiet because the buses were on strike, as were many food and textile factories.

Workers were striking against a National Front (NF) meeting to be held in the borough that day. The Nazi NF had come third in London’s local elections the year before.

I met up for a lunchtime drink with Blair Peach and three others in the Castle pub in central Ealing.

Blair was the president of East London NUT branch. He was known for his passion and energy. We had got to know each other better at the National Union of Teachers (NUT) conference in Scarborough ten days earlier.

The NF had been granted permission to use Southall town hall for a public meeting to rally support for their general election candidate Ernest Pendrous.

The party hoped to do well in the upcoming election but had been confronted by the Anti Nazi League (ANL), a mass anti-racist movement launched two years earlier.

The ANL was exposing the NF as Nazis and organising a huge movement to confront them whenever they attempted to march.

The NF meeting at Southall followed a similar one two days before in Leicester. There the police attacked anti-racists in an attempt to allow the NF to hold a rally. But the anti-racists had stopped the meeting from taking place.

It was clear that the police were becoming more violent and more desperate to crush opposition to the NF.

The day before the meeting in Southall thousands of anti-racists had marched over two miles to Ealing town hall – we had collected a petition demanding that the meeting be banned.

We were stunned to be met by ranks of mounted police surrounding the building. Such an excessive display of power was a scary declaration of intent by the police and the state.

Mainstream political parties could not see that the meeting was a deliberate attempt to rub the noses of local people in the dirt. It followed a spate of racist attacks and the murder of Gurdip Singh Chaggar, who was knifed to death in July 1976.

We chatted in the pub with a sense of foreboding. The Nazis and, indirectly, the coppers had taken a pasting in Leicester. Would the police and the NF seek their revenge in Southall?

Blair was called a “Paki” as he waited to be served at the bar. His black beard and thick hair gave a racist some encouragement to stereotype him as such.

But he just happened to be a relatively dark-skinned 33 year-old New Zealander who taught at Phoenix Special School in Bow, east London.

We left the pub about 3 o’clock. Much as I wanted to be in Southall, there was a parents’ lobby of an Ealing council education committee meeting that my union branch had agreed to support.

So we arranged to meet up at 8pm in the Grosvenor pub in west Ealing. I reached the pub just before 8pm.

Regulars were talking about a huge confrontation that had taken place with police. There were rumours of mass arrests and many injuries.

A friend arrived. She had heard that Blair had been hurt and was at Ealing hospital. We got in her car and drove towards Southall, but were turned back by police roadblocks. So we headed to another friend’s house.

There were about 12 of us there. Three people were sure that they had seen Blair being hit on the head when police charged the march.

One of our group found him after a local family had taken him in. Blair had been conscious but groggy.

He was able to walk into the emergency reception at Ealing hospital, but doctors were worried and admitted him immediately. Police already knew there was something to be worried about. They quizzed his companions.

We told Radio 4, the Times newspaper and the BBC news that the riot police – known as the Special Patrol Group (SPG) – had murdered Blair.

Within an hour of Blair’s death, police raided the house we were in. They knew where we were and were desperately attempting to cover their tracks.

Over the next day the full picture began to emerge. We found that thousands of local protesters managed to block all the roads around the meeting. Many more arrived on foot.

The police were determined to allow the handful of NF supporters into the meeting. They charged the demonstration with brutality, resulting in over 700 arrests. Hundreds were hurt.

Police trashed the offices and recording studio of the community group Peoples Unite, where the legal and medical support staffs were based.

The SPG forced everyone to run a gauntlet of truncheon blows. One of their victims was Clarence Baker, a singer of the popular reggae band Misty in Roots. He only emerged out of a coma some five months later.

A subsequent investigation revealed that “homemade” weapons were found in police lockers.

Blair died from a blow inflicted by something strong enough to cave in his skull, but malleable enough not to cause any external bleeding. A lead-filled plastic hose was the most likely instrument – one of the weapons found in police lockers.

But the coroner returned verdict of death by misadventure, letting the police off the hook.

One of the six SPG Unit One police who attacked protesters in Beachcroft Avenue struck the fatal blow. The officers were transferred out of service before any action could be taken against them.

We need to mobilise the kind of solidarity today that stopped the Nazi NF in the 1970s. The fascist British National Party, the heirs to the NF, and ruthless state forces, threaten us once more. 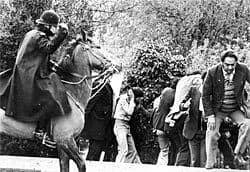 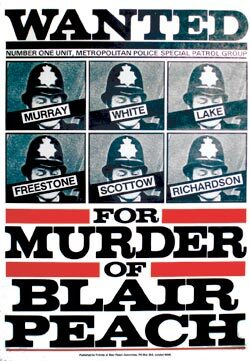