Blair’s ‘solutions’ are the problem

This article is over 20 years, 3 months old
Tony Blair summed up Labour's mission as, 'Let us reorder this world,' when he spoke at the Labour conference last week. He said the 'international community' could sort out the world's problems. But when Blair talks of the 'international community' he does not mean ordinary people showing solidarity with one another.
By Hazel Croft
Downloading PDF. Please wait...
Saturday 13 October 2001

He means the governments of Britain, the US and Europe, and their allies. He means the military machine of NATO, multinational companies, and institutions like the International Monetary Fund and World Bank. Such people will never bring solutions to the world’s problems. It is precisely these governments and institutions, which Blair wholeheartedly supports, that created the horrors of famine, war and injustice.

He spoke about the suffering in ‘the slums of Gaza’. But it is Western intervention which helped set up the state of Israel, armed it and supported it through all its massacres of Palestinians. Now Blair’s supporters talk of establishing ‘protectorates’-one of the words British governments used to describe their colonies.

Every time the world’s powers go to war they try to present their motives in a noble light. They tell us they are fighting against tyranny and for democracy. It was in the name of the ‘international community’ that the US and Britain, under the useful cover of the United Nations, bombed Iraq during the 1991 Gulf War, murdering tens of thousands of civilians and Iraqi army conscripts. It is the ‘international community’ and the UN which have maintained sanctions on Iraq, murdering over 500,000 children.

Blair blames the Taliban for the human catastrophe in Afghanistan. It was the intervention of Russia and the US, two of the key players in Blair’s present ‘international community’, which wrecked Afghanistan. They have fuelled two decades of civil war and desperate poverty. Russia invaded Afghanistan in 1979, and in the 1980s the US backed the Mujahadeen rebels who fought back against Russia.

US president Ronald Reagan and Britain’s Margaret Thatcher praised the Mujahadeen as ‘freedom fighters’. Through its allies Pakistan and Saudi Arabia, the US poured millions of dollars of military aid in to arm the Afghan rebels.

‘THE STATE of Africa is a scar on the conscience of the world. We could heal it’-Blair

Africa is a ‘scar’ because Britain, France, the US and the world capitalist system have wrecked the continent. The Western powers carved the continent up in the 19th century in their scramble for profits and power. In a period of 20 years they carved out 30 colonies covering ten million square miles-without the slightest reference to the local populations.

Governments and big firms looted Africa of its wealth. They slaughtered millions of people in order to keep their hands on the spoils. They installed and encouraged militaristic and corrupt regimes in order to guarantee profits. And they stoked up division and hatred in order to ‘divide and rule’. On top of this, the economic crisis of capitalism pushed many African countries to the brink of collapse.

Institutions like the IMF and World Bank provided loans. But in return they imposed austerity and Structural Adjustment Programmes which have destroyed hospitals, schools and welfare services in already desperately poor countries.

They demanded debt repayments which kill thousands of children through malnutrition and illness every day. The ‘international community’ represented by the IMF and World Bank refuses to wipe out these debts. Relieving the debts of the poorest 20 countries would cost £4 billion-a sixth of what Bush pledged for the first phase of the war on Afghanistan. Today 40 percent of people in sub-Saharan Africa, 290 million people, live on less than 70 pence a day.

On 11 September, the day of the attack on the US, 35,615 people in the world died from starvation and the diseases caused by malnutrition.

Nowhere has the horror created by the West been more evident than in the Democratic Republic of Congo, formerly called Zaire. Belgium seized the country, then the Belgian Congo, in the 1880s when the big European powers carved Africa up. Belgium’s King Leopold’s regime massacred and tortured hundreds of thousands of people.

It forced almost the entire population to hunt for rubber, and slaughtered those who failed to deliver the required quota. During Leopold’s 25-year reign of terror half of Congo’s population, some ten million people, died from overwork, torture and starvation. But the horror continued even when revolt eventually forced Belgium to grant independence in 1960.

The Western powers were prepared to go to any lengths to keep control of the cobalt, uranium, diamonds and other rich resources of the country. In 1961 the Belgian and British governments, the CIA and the United Nations united to crush the newly elected government, and they murdered prime minister Patrice Lumumba.

Then in 1965 the CIA and the West installed one of Africa’s most ruthless and corrupt despots, Mobutu, as president of Zaire, and protected him almost to the end of his rule in 1997. Since then the mining multinationals have continued to squabble over Congo’s wealth. Six foreign armies have intervened, many of them friends of the West. This has fuelled the civil war, which has left two and a half million people dead and which still rages today.

‘IF RWANDA happened today, when a million were slaughtered, we could act there’-Blair

Western powers did intervene in Rwanda before the 1994 massacres. In 1990 the French government sent troops to save the regime which would unleash the mass murder four years later. In the same year the IMF imposed its Structural Adjustment Programme which plunged society into turmoil and kicked off the spiral of scapegoating towards the Tutsi minority

A UN force was sent to Rwanda, but at the height of the genocide Madeleine Albright, then President Clinton’s Secretary of State, ordered Western troops to leave the country. However, once the killing had begun, there was renewed French intervention. In June 1994 France’s president, Mitterrand, launched Operation Turquoise and sent 2,500 troops to Rwanda.

But the French troops encouraged rather than stopped the massacres. One account describes how, ‘on seeing French flags, hidden Tutsis would come out of hiding only to be immediately killed by the soldiers of the militiamen. As a French soldier protested, ‘I am fed up of being cheered along by murderers’.’ The ‘safe zone’ created by the French was a haven for the Hutu generals who had been responsible for the genocide.

An eyewitness reported that it was common to hear French troops called ‘Mitterrahamwe’-after the Hutu butchers of the Interahamwe.

‘THE starving, the wretched, the dispossessed and the ignorant-they are our cause too’-Blair

Blair has travelled the globe singing the praises of the free market and capitalist globalisation. He visited Argentina in the summer. He did not bring a message of hope. He praised the austerity programme which meant millions of workers and pensioners had their living standards reduced by 13 percent at a stroke.

Jazz Khan — “We will be taking up all the everyday issues” 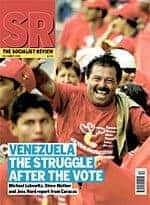 Venezuela: The Struggle after the Vote 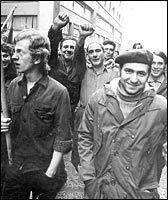 Can we change the world without taking power?