This article is over 14 years, 8 months old
The fascist British National Party (BNP) was halted in its tracks at last Thursday’s local elections.
By Anindya Bhattacharyya
Downloading PDF. Please wait...
Tuesday 08 May 2007

The fascist British National Party (BNP) was halted in its tracks at last Thursday’s local elections.

Despite standing some 750 council candidates – and predicting 30 to 70 gains – the Nazis ended the night with a net gain of only one councillor to their existing 49.

Much of the credit for blocking the fascist advance is down to the qualitatively higher level of anti-fascist campaigning this year, from organisations such as Unite Against Fascism, Love Music Hate Racism, and the unions.

“The fascists boasted that they were going to make a breakthrough,” said Weyman Bennett, joint secretary of Unite.

“But mass campaigning exposed them for telling racist lies. Now we have to use this victory to roll them back further – 50 BNP councillors is still 50 too many.”

Closer analysis of the results shows that the fascists have had trouble building on the ground in areas where they have previously managed to break through.

Only one of the nine existing BNP councillors standing on 3 May was re-elected.

In Burnley, the BNP’s former stronghold, it lost three seats taking its total down to four.

In Oldham – where BNP leader Nick Griffin stood in the 2001 general election – the fascists only stood in two wards, and were humiliated in both.

The BNP lost its sole councillor in Broxbourne, Hertfordshire, and failed to add to its four existing councillors in Sandwell in the West Midlands.

Nor did the Nazis win a single council seat in key target areas such as Thurrock in Essex, Blackburn & Darwen in Lancashire, and across several councils in West Yorkshire.

Throughout the campaign, the BNP faced concerted and vocal opposition from anti-fascist campaigners.

Unite distributed half a million leaflets across the country, while Love Music Hate Racism held a series of gigs promoting the anti-fascist cause.

Other anti-BNP initiatives were undertaken by trade unions at local, regional and national levels.

Despite the overall picture of success in holding the Nazis back, certain areas of the country are still a cause for concern. Wales saw high BNP votes in several areas, including a 9.4 percent share of the regional vote in Wrexham.

This followed a campaign by the BNP that sought to exploit racism in the town.

A party political broadcast made baseless accusations that Iraqi asylum seekers had started violent attacks on the local population.

Elsewhere the BNP gained three councillors in Stoke-on-Trent, though it also lost one. In Staffordshire Moorlands it also made a single gain.

The fascists also established a foothold in Leicestershire, winning two rural seats on North West Leicestershire district council and one in Charnwood borough council on the outskirts of Loughborough.

Moreover, despite its setbacks in Thurrock and Broxbourne, the BNP still plans to target the Greater London area.

It hopes to build on its 12 councillors in Barking & Dagenham to win enough votes to take a seat on the London Assembly next year.

But the message of this year’s elections is that united campaigning can prevent the BNP from making gains, even in an atmosphere of disillusion with mainstream parties and hysteria against Muslims and immigrants stoked up by the press. 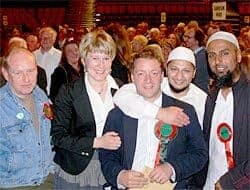 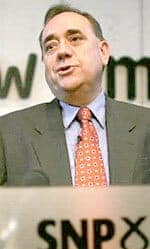 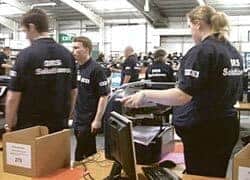