This article is over 18 years, 10 months old
Many Iraqis who fled Saddam Hussein's regime are opposed to war. Socialist Worker spoke to four of them
Downloading PDF. Please wait...
Saturday 01 March 2003

Nadje al-Ali is a member of Act Together: Women against Sanctions and War on Iraq.

‘BUSH AND Blair’s talk of this being a war for the liberation of the Iraqi people is a lie. That is not the motivation. I do not think the people of Iraq will be liberated by having US and British troops occupy their country.

I am very much opposed to Saddam’s regime. Sometimes I feel we don’t make that clear enough. The regime is oppressive. It does not allow any political opposition. It is killing its own people. One of my uncles was executed. Having said that, I am opposed to the economic sanctions. If anything, the regime has been strengthened by the sanctions. It has only meant the suffering of ordinary Iraqis. Now with this war I think there is going to be an incredible humanitarian disaster.

Already children are dying. Disease is widespread and there is malnutrition. I’m angry that we’ve used these arguments all these years to lift the sanctions, and now Blair is trying to use them. The US and Britain are to blame for the sanctions regime. I don’t trust George Bush’s motivation. The last thing in the Middle East he is concerned about is the welfare of the Iraqi people.

A war would not just be about oil. They are under pressure to do something in their war on terrorism and Iraq is an easy target. The solution is to lift the economic sanctions. If Iraqis are given the chance to recover from various wars, continued bombing and sanctions they will be able to sort themselves out. Saddam was supported by the West-that is one reason why Iraqis could not get rid of him!

I am sceptical of the Iraqi opposition groups that the press talks about. Some are CIA stooges-others have their own interests. I think any hope comes from the Iraqi people. If Saddam does have weapons of mass destruction and they bomb him, then he could think, I have nothing to lose-why not use them?

If he doesn’t, then all the killing of ordinary people will have happened for nothing. I think Blair’s idea that we who oppose war have blood on our hands is disgusting. It’s hypocritical. Our leaders have been turning a blind eye to the killing all these years. No one gave a damn then.

The anti-war demonstrations in London and around the world were great. Many Iraqis did not join the march. They are afraid of politicians. During the last war they were arresting Iraqis! Sometimes I felt a bit guilty because the mood of the march reminded me of a carnival in Rio.

But I felt really good, positive and moved by the march. It was the best protest I have participated in.’

Sabah Jawad is a member of the group Iraqi Democrats against War and Sanctions. He spoke at the Hyde Park rally on the 15 February demonstration.

‘WHAT IS going on is the cynical exploitation of the situation in Iraq. People have been struggling for 35 years against this regime for democracy and human rights. The people who are advocating war now are the ones who turned a blind eye to that struggle.

The only people who support us are those opposing war. You can’t talk about defending human rights and contemplate devastating war. The economic sanctions, the most ruthless imposed in the history of mankind, have resulted in one million people being killed. They are mostly children and vulnerable people. This war is not about human rights or weapons of mass destruction. It is about the occupation of Iraq and control of energy. The US wants to dominate the world and its energy supplies.

Regime change is entirely up to the Iraqi people. They should decide how to establish a progressive, democratic society. It is up to the people all over the world. It is not the business of Bush and Blair to dictate what happens. I think Blair has failed miserably in proving there are stockpiles of weapons in Iraq. Public opinion is against him. That is why he is finding new causes for this war, saying it is now about liberating Iraq. It is a sign of his isolation and desperation. I do not think he is convincing the British people.

I think he will suffer if he continues to align himself to the most reactionary establishment in the US. They are so right wing they think Israel’s leader Ariel Sharon is a moderate! I came to Britain in 1968, three months after Saddam Hussein took power in a coup. He was aided and abetted by the CIA. When he was oppressing and gassing his people, and carrying out a war on the Kurds, what did they do?

They cite his human rights violations, but they are his backers of yesterday. The anti-war demonstrations were a massive show of solidarity and opposition. People across 600 capitals and cities were united with one voice saying we don’t want war.’

Eseel Ahmed was living in Iraq near the Amariya civilian shelter that the US blew up during the last Gulf War. The bombs incinerated 403 people inside, mainly women and children, on 13 February 1991. She has lived in Britain since 2001.

‘A WAR means more bloodshed and more disaster. I remember the last war. It was horror, a nightmare. Every night we feared we would not make it to the next day. Every night there was an attack.

No one was able to go out. We were trapped in our houses. The Amariya shelter was near where we lived. We were really lucky not to be there that day. My grandmother was ill. She decided to stay in the house and risk dying there. We all decided to stay together. I remember the windows smashing with the force of the bombs. We were so lucky.

We had no electricity or water for three months. I fear that if there is a war this, and much worse, will happen again. Our hearts are with our family and friends in Iraq. All of us fled Iraq for our lives. You can’t speak up against the regime in Iraq. You can’t say anything about the president. The intelligence services are spread out. My life was in danger. They could have executed me or put me in one of their prisons.

If this war had a one percent chance of liberation, then yes. But it does not have even this chance. This war will not bring freedom. If Bush and Blair want freedom for us in Iraq, then they should leave it for us to decide who our leader is.

I had a feeling that the anti-war demonstrations would be big. But to see nearly two million people! I am so glad all these people oppose war. It was an unforgettable event. Hopefully its effect will be to stop the attack on Iraq.’

Usama al-Shabibi lives with his family in London. They all went on the anti-war demonstration.

‘THIS TALK of liberating Iraq is based on spin from Mr Blair. It’s about oil and their interests in the region, those of the oil and arms corporations. They have recently stated that this is a humanitarian campaign. It is another lie. Iraqis do not support war. It is very difficult for Iraqis to voice their concerns.

Everyone wants to get rid of Saddam. Most Iraqis have suffered from Saddam. I have family in Iraq. I left Iraq 25 years ago. There are three million Iraqis in exile. The majority fled because of Saddam’s regime. It is well documented that the West helped put him in power. The politicians supported Saddam’s regime. They were praising it, saying it will be good for our interests.

I think you liberate Iraq by first of all giving unconditional support to people opposing Saddam. Lift the sanctions. People spend every day trying to feed themselves and their families. They are too weak to think about the regime. Hundreds of thousands of people in Iraq are living on the daily rations they get from the government. These coupons cover things like flour, lentils and oil.

It means they are more under the regime’s control than before. I thought the anti-war demonstrations were fantastic. You could see all these people going onto the streets and saying we are fed up with these lies and we don’t want war. This was really a candle in the dark. It was very promising.’

‘The war which is likely to break out shortly is not like the Second World War. All comparisons with appeasement and Munich are so much hot air which merely justifies starting a war. This is a war of aggression by the greatest military power on earth against a smallish, though very nasty, dictatorship. The US has used 9/11 to proclaim its global hegemony. I think they underestimate the complexities of the world-high-tech means of mass destruction are not enough.’
Eric Hobsbawm, Professor

‘This is not about the moral high ground Tony Blair has been speaking of. This is about the US retaliating for 11 September, and the coming confrontation is really to do with American concerns rather than those of the international community. It doesn’t look like 1939 or 1956. The effort to grab historical examples off the shelf and use them to legitimise what you’re doing at the moment seems to me to be treating history irresponsibly.’
Richard Overy, Professor

Make history with Respect in east London this weekend 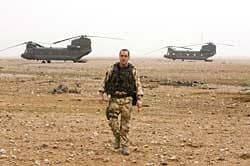 The agony of occupation