Bread and Roses – the 1912 Lawrence strike

This article is over 10 years, 0 months old
A strike by low-paid women mill workers 100 years ago this month shook the US ruling class – Judith Orr looks back at events and the powerful impact they had on other workers
Downloading PDF. Please wait...
Tuesday 03 January 2012

A ten-week strike by largely women mill workers in January 1912 turned into one of the most inspiring industrial and political struggles the US has ever seen.

The slogan on one of the women workers’ placards gave the strike the name it is remembered by today: “We want bread, and roses too!”

They were fighting a pay cut imposed by the American Woolen Company—but they also wanted dignity.

Against all the odds the workers of Lawrence, Massachusetts, won both. Their victory went down in the history books and became an inspiration for workers across the US and the world.

The textile workers at the Lawrence mills of the American Woolen Company in 1912 were made up of 28 different nationalities. They spoke some 45 different languages.

Half of the workers were girls and young women between the ages of 14 and 18. They were non-unionised and low paid.

Conditions were deadly. Elizabeth Shapleigh, a local doctor, wrote, “A considerable number of the boys and girls die within the first two or three years after beginning work—36 out of every 100 of all the men and women who work in the mill die before or by the time they are 25 years old.”

The average worker’s wage was just $9 a week. They lived in company houses or crowded wooden tenements that could cost up to $6 a week.

Their labour helped fuel the massive industrialisation and expansion of US capitalism at the start of the 20th century.

The main US union federation at the time was the American Federation of Labour. It organised skilled workers who were mostly white and male. The mill workers were seen as being impossible to organise.

Yet colossal strikes by poor and immigrant workers took place in the decade before the First World War.

The battle in Lawrence began when the American Woolen Company cut women workers’ pay. This followed a new state law coming into force, which set a limit on how many hours a week women could work.

The first workers to be given the reduced pay packets were a group of Polish women weavers.

Incensed, they stopped their looms and walked out, shouting, “Short pay! Short pay!” The following day workers at another mill walked out. They marched from mill to mill. They rushed the gates of one and shut down the power to the looms. Thousands more walked out to join the strike.

The strikers met up and decided they needed help. The union they turned to was the Industrial Workers of the World (IWW)—or the Wobblies as they became popularly known.

Socialists, anarchists and radical trade unionists set up the IWW in 1905. It welcomed all workers—immigrants, unskilled and skilled, women and men—and aimed to build maximum unity across the working class.

The IWW sent one of its veteran organisers to Lawrence. He had led strikes and organised in the shipyards of San Francisco as well as the mining and lumber camps of the West Coast.

His name was Joseph Ettor and he was 27 years old. He was Italian and fluent in many of the languages spoken by the workers of Lawrence.

Within 48 hours he had organised a strike committee of 50 workers with every nationality represented.

Ettor was later arrested. The IWW sent other well known organisers, including Bill Haywood and Elizabeth Gurley Flynn, to help lead the fight.

The organisation of the strikers was awe inspiring. They invented a constantly moving picket line where strikers wore white armbands with “don’t be a scab” written on them.

Up to 6,000 marched through Lawrence in a human chain singing and chanting 24 hours a day for the entire ten weeks of the strike.

At night they would “serenade” outside the homes of scabs to make sure they couldn’t sleep.

They organised food and financial support for 50,000 people and fed almost the whole city, whose total population was 86,000.

Money flowed in from workers across the US after the strikers appealed for support, raising an average of $1,000 a day.

Labour historian Samuel Yellin wrote, “The problem of relief was so efficiently handled that during the ten week strike there was no wavering whatsoever in the strikers’ ranks.”

Four weeks into the strike, socialists and trade unionists in New York and other cities offered to take the children of strikers into their homes in solidarity.

On 10 February 120 children boarded the train from Lawrence and set off to New York. Some 5,000 members of the Italian Socialist Federation and the Socialist Party met them off the train, singing the Internationale and the Marseillaise.

One of the women who helped organise the children’s stay was Margaret Sanger, who later became known as a campaigner for birth control.

She testified to a congressional committee into the living conditions at Lawrence. “Out of the 119 children, only four had underwear on,” she said.

“Their outerwear was almost in rags. Their coats were simply torn to shreds.”

One group of children paraded down New York’s Fifth Avenue with their banners. But this public solidarity and defiance was too much for the authorities and they soon took their revenge.

On 24 February a group of children gathered in Lawrence station to travel to supporters in Philadelphia.

The place was filled with police who waded in and started grabbing children from their parents. One eyewitness described how police “closed in on us with their clubs, beating right and left with no thought of the children who then were in desperate danger of being trampled to death”.

“We can scarcely find words with which to describe this display of brutality,” they added.

Women who were arrested refused to pay fines and insisted on going to prison, sometimes with their babies in their arms. They would not be broken.

As Lawrence’s district attorney put it, “One policeman can handle ten men, while it takes ten policemen to handle one woman.”

On 29 January, striker Anna LoPizzo was killed when police broke up a picket line. Joseph Ettor and Arturo Giovannitti—an Italian socialist and poet—were arrested and charged as accessories to murder.

They were at a meeting three miles away at the time of LoPizzo’s death. The two spent eight months in prison without trial.

It took a mass campaign, including a one-day strike by 15,000 Lawrence mill workers, to acquit them.

But the violence meted out to women and children only won greater sympathy for the strikers.

On 12 March, the American Woolen Company bosses caved in. Workers won a pay rise of between 5 and 11 percent. They insisted the highest rise went to the lowest paid.

The Lawrence strikers did not just win for themselves. In the following months other textile companies granted pay rises to try and prevent unionisation drives and strikes.

The Detroit News estimated that as many as 438,000 textile workers received nearly $15 million in wage increases as an indirect result of the Lawrence strike.

The Lawrence strike broke the mould. It showed that unskilled, unorganised workers—including migrants and women—could unite and fight together as a class.

But it showed something else as well. People were changed by the experience of being on strike and confronting their bullying bosses. Workers who had known nothing but crushing drudgery blossomed in struggle.

Mary Heaton Vorse, a journalist and activist, described the transformation. “It was the spirit of the workers that was dangerous,” she wrote.

“They are always marching and singing. The tired, grey crowds ebbing and flowing perpetually into the mills had waked and opened their mouths to sing.” 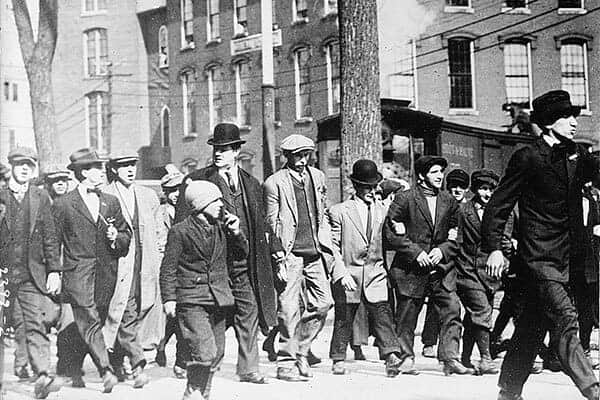