Britain’s Lebanese are living in fear and uncertainty

This article is over 15 years, 5 months old
For London’s Lebanese community, the past few weeks have been a traumatic time. Many of those now living in the capital arrived here following the start of Lebanon’s civil war in 1976, or were forced to flee during the Israeli invasion of 1982.
By Joseph Choonara
Downloading PDF. Please wait...
Saturday 05 August 2006

For London’s Lebanese community, the past few weeks have been a traumatic time. Many of those now living in the capital arrived here following the start of Lebanon’s civil war in 1976, or were forced to flee during the Israeli invasion of 1982.

Most have close connections with family and friends who remained in the country. The area around Edgware Road and Hyde Park in west London is the heart of the Lebanese community, and it’s here that I met Maha, a young woman who was born into a Shia Muslim family in the south of Lebanon.

Maha had heard from her family back home. “My family has run away from their house,” she said. “People are expecting to die each day. Children are being killed. It’s just like in Palestine – it’s normal for them to kill civilians, to kill children.”

Maha said her family supports Hizbollah and its leader Hassan Nasrallah. “They think he’s right – he’s fighting for his land and his people,” she said. “Hizbollah also fights for Palestine. They are fighting Israel.”

The resistance offered by Hizbollah is in stark contrast to the inaction of the Arab regimes, she added. “I’m really upset with the Arab governments – with Egypt and Saudi Arabia. They’re not doing anything.”

Mohammed is an even more recent arrival in Britain. He is 21 years old and came to the country a few months ago to study. I met him in a west London cafe.

“We’re from the east of the country originally, but my family lives in the city of Beirut, near the airport,” he said. “But now there is no more airport – everything is destroyed.

“My family has just fled Beirut and they are now in Syria. Our house, my dad’s factory, everything is gone. The people living there were just normal people.”

The images he has seen on the news each night show Mohammed’s neighbourhood in ruins. I asked what sort of messages he had received from inside the country.

“People think they are living in hell, that’s what they are saying,” he replied. “They are saying they cannot find anything to eat. Can you believe that? In the 21st century.”

Mohammed is from a Shia Muslim background, and he said that the attacks have focused on predominantly Shia areas of the country. “But we are all one country,” he added. “When they destroy homes they don’t ask, ‘Are you a Muslim or a Christian?’ The building where my family used to live had people of all religions.”

Mohammed’s voice cracked with emotion as he tried to explain how the invasion had affected him. “This is my land,” he said. “They are killing my family. What am I supposed to do or say? They are killing the innocent, they are killing children. Children of four or five months – are they fighters?

“I’ve seen little kids buried under buildings. There is no way for the Red Cross to get to them. Four United Nations workers were killed. They have even hit media stations. They are trying to destroy my country.”

None of the Lebanese people I spoke to in London wished to criticise Hizbollah. Many praised them for resisting the invasion. “Hizbollah are people like me or you,” said Mohammed. “They are not doing anything wrong. They are fighting to defend their land and get their brothers out of Israeli jails.

“There are hundreds of Lebanese and Palestinians in Israeli jails, and no one says anything. But because of two Israeli prisoners a whole country is destroyed.”

The support for Hizbollah is deep rooted and is not just based on their military success. “Everyone in Lebanon loves Hizbollah,” said Mohammed. “They do a lot to help people. Poor people on low incomes – they help those people.”

Mohammed was keen to stress that he felt welcome in Britain and that he felt most people were on his side. “Lots of people in Britain are against Tony Blair because he does what George Bush says,” he said. “When Bush says it’s not yet time for Israel to stop the killing, that is terrorism in itself.”

I met Hassan standing on the edge of a thousands strong demonstration called by the Islamist group Hizb ut Tahrir in London last Sunday. He was wrapped in a Lebanese flag and with his young family. Although the demonstration was strongly religious in tone, Hassan said that religion was not a fundamental question for him.

“My mother is a Shia Muslim, my father is a Sunni Muslim, and my home in Beirut is in a Christian neighbourhood,” he said. He added that he named his young son Daniel because Daniel was a prophet for Christianity, Islam and Judaism.

Hassan said, “I am one of those people who likes to concentrate on this question – how can you justify killing civilians again and again? That’s what we’re angry about. Not politics, religion – this is all rubbish.

“I’m a Lebanese citizen and my family is out there now. I’m angry that they’ve invaded my country, like they did in the past. There are children dying, and the Israelis say it’s a ‘mistake’. Come on, what kind of military technology do they have?

“We are angry that they are using the excuse of the two soldiers. We don’t want to hear about this any more. We Lebanese, people of all religions, are united against Israeli aggression.

“We’re also angry about the Arab countries. They are just sitting there, watching and making strange comments – especially the Saudi government.”

Hassan contrasted the cowardice of the Arab leaders with the bravery shown by ordinary people in Lebanon. “Although a lot of Lebanese are dying, we are showing we have more dignity than any nation in the world,” he said.

“We are suffering and we don’t like it – it’s terrible – but we are gaining something. We are fighting our enemy on our own.” 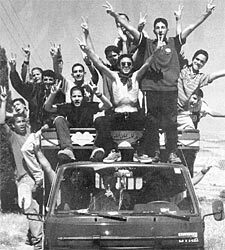 Hizbollah and Lebanon’s resistance to imperialism