THE G8 runs the global economy. They are its organising committee. The G8 are the eight most powerful nations in the world. They are not the largest — the G8 excludes China, India and Brazil.

They will invite selected Third World leaders to make themselves look good — in particular African leaders in favour of neo-liberalism. These African leaders will be there to burnish Tony Blair and Gordon Brown’s Africa Commission report, which is basically a charter for the neo-liberal exploitation of Africa, a new plunder.

The G8 will also parade their action on climate change and Blair will do his “I’m acting as a brake on Bush” line, while all the time they are in the pockets of the corporations that are causing climate change.

You can’t organise a party or a jumble sale without speaking to people and getting them together to organise it. The G8 get together to run the world and steal the resources of the world for the corporations — and if anyone objects, they send in the army.

It’s the eight most awful leaders of the world — Bush, Blair, Koizumi, Martin, Schroder, Chiraq, Berlusconi and Putin. Putin is the one who looks like Dobby from the Harry Potter film.

The key thing is that these people run the world, cause inequality and war. These are the people who killed 100,000 in Iraq. And they’ve dwarfed every despot in Africa in terms of corruption by ripping off over $8 billion in contracts in Iraq for US corporations in the last year alone.

You should protest at the G8 if you didn’t approve of the war on Iraq, if you didn’t like being lied to and if you want to come and “greet” George Bush. The rhetoric of the Blair government — and Brown in particular — is that they want to “make poverty history”.

But what they’re doing is they’re attempting to capitalise on the Make Poverty History campaign by saying they want to meet the aims of the campaign.

But they actually only support one of the aims slightly—to relieve debt. They don’t support the demands on reforming the international financial architecture or fair trade.

Underneath the rhetoric — but not very far underneath — are the conditions they will impose on developing nations. The conditions are that they open themselves to Western corporations and privatise everything in sight. This is a recipe not for abolishing poverty but for creating more of it.

They are asking people to demonstrate on 2 July at the same time as the police are claiming Edinburgh will be overrun by anarchists. The question is, are they going to arrest Douglas Alexander and the Labour Party leaders who are calling for people to go out on the streets?

A counter-summit is being facilitated by G8 Alternatives — a group made up of non-governmental organisations (NGOs), social movements and activists.

We’re planning to show there are practical alternatives to the corporate globalisation agenda of the G8.

We will be having big plenary meetings on war, on Africa, climate change and corporate globalisation, and many other things.

The G8 protests have meant an unprecedented mobilisation in Scotland, of a wider range of people than has been seen before. We want to focus attention on the extent to which what’s happening in Scotland and the rest of Britain is the same as what’s happening to the developing world — it’s the same process and we’re all together in the same boat.

We will be holding all sorts of events — we’ve booked some really massive venues and we’re inviting NGOs, social movements and trade unions from all over the world to come and join us.

There was a call from the Assembly of Social Movements at the European Social Forum to mobilise for the G8 in Edinburgh so we’re expecting a lot of people. We’re hoping the police will facilitate peaceful protests rather than having an aggressive approach. There are a great breadth of organisations coming to protest in Edinburgh.

There are going to be big, carnivalesque, family events.

We are hoping to have a comedy festival and bands. There is an art festival starting next month from Glasgow called Ya Basta! — Spanish for That’s Enough! — as a kind of taster, in the run-up to the G8.

There’s a myriad of things going on that are not facilitated by G8 Alternatives but by other groups. We’re saying, the more the merrier.

David Miller is a professor of sociology at Strathclyde University, co-editor of the Spinwatch website, which counters corporate and government propaganda, and an activist in G8 Alternatives. www.spinwatch.org.uk 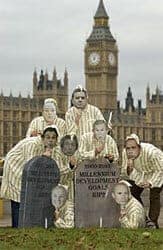