Buzzing with ideas and enthusiasm

This article is over 17 years, 6 months old
"EVERYONE IS here to get involved." That was the comment of Jody McAviney, one of several thousand who attended the opening weekend of the Marxism 2004 festival of ideas in London.
Downloading PDF. Please wait...
Saturday 17 July 2004

“EVERYONE IS here to get involved.” That was the comment of Jody McAviney, one of several thousand who attended the opening weekend of the Marxism 2004 festival of ideas in London.

The event attracted those who have been active in the anti-war protests, struck in industries like the Post Office and London Underground, and campaigned for Respect.

People came from across Britain and countries around the world to join in the political discussions.

Jody and Ian Mason are both unemployed, and travelled from Fife in Scotland.

Ian said, “I have been campaigning for the Scottish Socialist Party, so the discussions about elections have been especially interesting. It’s a very good atmosphere, where everyone speaks.”

Oli Rahman, who received almost 20,000 votes when he stood for Respect in the City & East London Assembly constituency on 10 June, told Socialist Worker, “This is my first time at Marxism. I will definitely come again. I have learned lots of new things and joined in the debates.

“I’ve been to meetings on the future of the anti-war movement, the new mandarins of US power, the awkward squad of union leaders, and development in the North and South of the world.

“People here are so friendly and enthusiastic—they really believe in what they are doing.”

Marxism 2004 aimed to give people more confidence and direction to build the resistance.

A council worker in Hackney in east London, said, “I came with certain questions which I wasn’t sure could be answered. But Marxism 2004 gives you a reference point to start from and have a discussion on every subject.

“I told the people I work with I was going to be here, and I am going to take what I’ve learned back to them.”

At Marxism there was also space to develop new strategies of resistance. A meeting on “Racism, rap and guns” with Asher D from So Solid Crew, Corey Johnson from Defender Records, Weyman Bennett from Unite Against Fascism, and rapper Skeme drew a big audience.

Weyman said afterwards, “You got a real sense of the movements coming together. People are speaking out against the war on terror and how it is used against black people.

“Asher D and the other speakers said it was the best meeting on gun crime they had been to in ages. It was the first time they could speak out against being scapegoated over crime.”

Yusra Warsana, a student at Liverpool University, said, “This is my second year at Marxism. It just keeps getting better.

“Marxism shows that it’s not just the elite that go along to political conferences. It shows how conscious people are, how they see the need for change.

“I spoke at a meeting on race and the situation facing the black community in Britain. I gave my contribution about how race and class go hand in hand.”

Sixth form students John Berry from Wigan and Dan Berry from Preston expressed an enthusiasm for the more theoretical meetings than ran through the whole event.

“I went to a meeting on violence and revolution, which explained how revolutions can be destructive, but they are also creative,” John said.

“And I went to one on the Bolsheviks and revolution. The speaker explained that, contrary to popular opinion, the Bolsheviks didn’t oppose religious freedom. It was the Stalinists who came after who did that.

“Trotsky and Lenin reached out to Muslims.”

Dan added, “I like the meetings where there is a lot of debate, like the George Orwell meeting where one speaker was critical of Orwell. Marxism is an impressively democratic event. Anyone from the Labour Party would be really shocked to see how many people here speak and disagree. Marxism the theory helps me to understand the world. Marxism the event helps me to understand the theory.”

Lisa Schofield and Rachel Taggart, 15 year old school students from Manchester, were at Marxism for the first time.

Rachel said, “I went to a meeting on women’s oppression with Lindsey German.

“I got up and made a point. I was a bit nervous because there were lots of people there, but the atmosphere is so encouraging.”

Lisa added, “I went to a meeting on the relationship between the US and Britain. People were talking about wars and treaties, some of which I hadn’t heard of.

“Afterwards I went and bought a book about the US and imperialism. The meeting inspired me to find out more.”

James, a plumber from Wakefield, said, “Marxism has been absolutely fantastic—some of the best days of my life.

“In Chris Bambery’s meeting on fascism, a young boy got up and talked about how the BNP were trying to build at his school and how he was trying to stop them. It was inspiring.”

Osama from Leeds said, “I have been to theoretical meetings on things like democracy and imperialism.

“The left has to continually develop new strategies, and Marxism 2004 is making a big contribution to reassessing where we are and outlining where we should be heading.”

Contributions from India to Italy

MADHURESH KUMAR came to Marxism from Delhi in India. He said, “It’s a great feeling here. There’s a wide range of issues—women, history and education. People from different viewpoints are allowed to speak. At Michael Albert’s meeting on ‘Life after capitalism’ he criticised Marxists like Lenin and Trotsky, but people still listened and applauded. Then they came in and spoke. I met the Socialist Workers Party at the World Social Forum in India in January. In India people are looking to alternatives other than the old left.”

Andrea Del Monaco is a member of Rifondazione Comunista in Italy. He said, “I really liked the words of Walden Bello and the Brazilian MP Luciana Genro. The discussion about the ESF was very interesting. In a way Marxism is an answer to capitalist exploitation, which doesn’t permit you to communicate with others. It is a much more international event than others I have been to.”

They included “Revolutionaries and elections” with Respect by-election candidate John Rees, “The future of the anti-war movement” with Lindsey German and Andrew Murray from the Stop the War Coalition, and “The London European Social Forum” with Chris Nineham and Prabir Purkayastha.

Chris Harman talked about “Revolution in the 21st century” to an audience of nearly 1,000 on Saturday evening.

Pensioners come back for more

ANNE ROSE is a pensioner from Stockport. She said, “This is my twelfth year at Marxism. I really enjoy the meetings. I liked the meeting on English identity because I’m against all forms of patriotism. I am pleased to see so many young people here, and so many black and Asian people.” 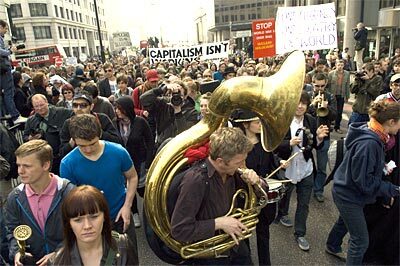 G20: Photos of the London protests