This article is over 9 years, 10 months old
Two hundred years ago last month the radical poet Byron spoke in the House of Lords against a bill to make frame-breaking a hanging offence. Bitter anger and contempt runs through his speech, made on 27 February 1812.
Downloading PDF. Please wait...
Tuesday 28 February 2012

Two hundred years ago last month the radical poet Byron spoke in the House of Lords against a bill to make frame-breaking a hanging offence. Bitter anger and contempt runs through his speech, made on 27 February 1812.

He said that the law meant people were “liable to conviction, on the clearest evidence, of the capital crime of poverty. Men, who had been nefariously guilty of lawfully begetting several children, whom, thanks to the times!—they were unable to maintain.”

After describing the process of workers thrown out of work, he argued, “The rejected workmen, in the blindness of their ignorance, instead of rejoicing at these improvements in arts so beneficial to mankind, conceived themselves to be sacrificed to improvements in mechanism.

“In the foolishness of their hearts, they imagined that the maintenance and well doing of the industrious poor, were objects of greater consequence than the enrichment of a few individuals.”

His sympathies were with “Men as I have seen them meagre with famine, sullen with despair, careless of a life which your lordships are perhaps about to value at something less than the price of a stocking-frame.”

He railed against the injustice, asking, “Is there not blood enough upon your penal code, that more must be poured forth to ascend to heaven and testify against you?

“Will you erect a gibbet in every field, and hang up men like scarescrows?”

Byron is known to have donated money to the rebellion—and he also wrote poems in the rebels’ honour. We reprint some extracts below.

from Song for the Luddites

“As the Liberty lads o’er the sea
Bought their freedom, and cheaply, with blood,
So we, boys, we
Will die fighting, or live free,
And down with all kings but King Ludd!”

from An Ode to the Framers of the Frame Bill

“Men are more easily made than machinery—
Stockings fetch better prices than lives—
Gibbets in Sherwood will heighten the scenery,
Showing how Commerce, how Liberty thrives!
Some folks for certain have thought it was shocking,
When Famine appeals, and when Poverty groans,
That life should be valued at less than a stocking,
And breaking of frames lead to breaking of bones.” 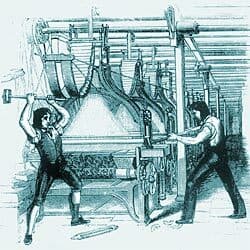