This article is over 19 years, 0 months old
AN IMPORTANT conference held in Cairo, Egypt, last December attracted 400 delegates and launched the International Campaign Against US Aggression on Iraq. The conference issued a declaration against war and globalisation. The key points of the declaration include:
Downloading PDF. Please wait...
Saturday 18 January 2003

AN IMPORTANT conference held in Cairo, Egypt, last December attracted 400 delegates and launched the International Campaign Against US Aggression on Iraq. The conference issued a declaration against war and globalisation. The key points of the declaration include:

‘We reaffirm our resolve to stand in solidarity with the people of Iraq and Palestine, recognising that war and aggression against them is but part of a US project of global domination and subjugation.

‘That solidarity is integral to the internationalist struggle against neo-liberal globalisation.

‘The Cairo meeting is an extension of a protracted international struggle against imperialism, from Seattle and Genoa, to Lisbon and Florence, to Cordoba and Cairo.

‘Capitalist globalisation and US hegemony prioritise the interests of monopolistic capitalist circles above those of the people, including Europeans and US citizens.

‘They also integrate the economies of different countries into a single global capitalist economic system, under conditions which undermine social development.

‘In addition poverty and unemployment increase.

‘We declare our total opposition to war on Iraq and our resolve to continue the struggle against US policies of global domination.

‘The Cairo conference against war on Iraq and in solidarity with Palestine represents the launching of an international popular movement that creates effective mechanisms for confronting policies of aggression.’

John Rees, vice-chair of the International Campaign Against US Aggression on Iraq, explained the significance of the Cairo declaration at Saturday’s London conference, which voted unanimously to support the declaration.

‘We have an opportunity that presents itself once in a generation-an enormous international movement against war. The Cairo declaration is of great importance because it is a call from the most powerful centre of the region of the globe that will be most powerfully affected by an attack on Iraq.

The greatest assistance to people in the Middle East is for the movement in the West to deliver the greatest possible solidarity to them. One way to do this is to sign the declaration. This can be done by leaders of the movement, the strongest organisations of the labour movement and from individuals in the movement.’

For the full text of the declaration and a list of signatories so far go to www.stopwar.org.uk

‘PEOPLE HAVE to be prepared to take action if murder is committed in Iraq. The support from trade unions for the anti-war movement is unprecedented. We have to force the other trade union leaders to get off the fence.’

‘THERE WERE four of us from Rossendale who travelled to the 28 September anti-war demonstration. We went on the coach from Burnley. When we came back we launched our own Stop the War group. We had about 23 people at the launch meeting. A Labour borough councillor came to our meeting and said he planned to resign if war started. He is trying to get other councillors to do the same. We’ve had stalls, petitions. On 31 October we had a protest rally in the town and over 50 people came. Now we are taking a coach to London for the 15 February march. Everyone can do the same.’

‘THE US is the greatest terrorist of the 21st century. I served my country in the last Gulf War. I was exposed to depleted uranium. If they to that do their own side, think what they do to the rest of the world. Soon hundreds of people will be leaving for Baghdad to make it harder for Bush to launch World War Three and destroy our world.’

‘THE Ark Royal aircraft carrier did not set sail unopposed. We dropped a large banner saying ‘No to war’ down walls at the entrance to the harbour. Hundreds of relatives were saying goodbye, but we got no flak. I remember during the Falklands War being called a ‘traitor’ for opposing war, but not this time. There has been a sea change. Our anti-war movement can reach parts we have never reached before.’

‘IT IS our historical responsibility to turn back the tide of this war. The Campaign for Nuclear Disarmament is proud to work alongside the Stop the War Coalition and the Muslim Association to mobilise against this war.’

‘GLOBALLY IT is only the leaders who want this war. The people of the world do not want it. We have to be a thorn in the side of this imperialist government. We in the FBU are also preparing to stand up and fight for what we believe in, to stop the government decimating the fire service.’

‘UP UNTIL 1999 I was an officer in the British army. I represent the change in what is happening. A friend still in the army told me he was trying to persuade himself that the war was not an entirely squalid affair. Our argument is penetrating hitherto imperialist bastions of the establishment.’

‘THE 28 September demonstration marked a shift in the Muslim community. We are against US hegemony, privatisation and globalisation. Young people are changing. If you go to the mosques you will find them.’

The US has all the smart weapons, but think what we could do with all the technology and all the money they spend on war to help the poor and the starving. We are trying to reclaim the earth for the people who produce the wealth. The prime minister is a very worried man.

He cannot take us to war and maintain his own position. Remember Suez. We are not a protest movement-we are a political movement because we believe another world is possible. The British prime minister has the power to stop Bush.’ 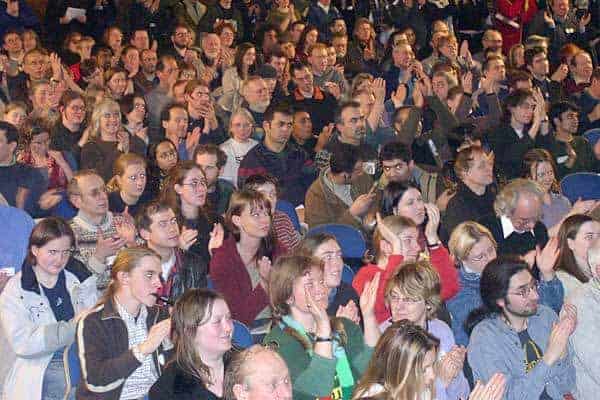 'Now the anti-war majority is on the march. Build the 15 Feb protest'