This article is over 3 years, 3 months old
Low paid workers from McDonald’s, Wetherspoon pubs and TGI Fridays restaurants all struck together last week. Alistair Farrow spoke to them about their fight, how they organised, and asks what sort of struggle can win
Downloading PDF. Please wait...
Tuesday 09 October 2018

Workers across the food industry are fed up with low pay, insecure work and being treated with contempt by bosses. They’re striking back.

Hundreds of people took action and walked out from their jobs in McDonald’s stores, TGI Fridays restaurants and Wetherspoon pubs on Thursday of last week.

It was an inspirational show of strength, with workers defying the little tyrant found in every workplace.

Beattie from TGI Fridays told Socialist Worker, “It’s all about the same thing—pay, dignity at work and trade union recognition.”

Workers travelled to Leicester Square in central London for a rally at 11am. Over 100 people attended, including international supporters.

More people took action across Britain throughout the day on Thursday. Some 50 striking Uber workers occupied the firm’s head office in London later on.

The demand for £10 an hour minimum wage, an end to zero hour contracts and union rights will take a hard fight. But the campaign is having an impact.

Workers who have already been out on strike are already seeing the benefit of being in a union.

“We’re feeling positive—awareness is growing and with every strike we get more publicity,” said TGI Fridays striker Natalie. More people are joining the union.

“Things are happening. We’ve got meals on shifts back after management took them away in some stores. And they’ve stopped clocking us back.”

Clocking back is when management round workers’ hours down to the nearest hour as a punishment for minor lateness or to save on wages.

“They’re just starting to know that we are picking up on this stuff and they can’t get away with it anymore,” said Natalie. Before the strikes Wetherspoon brought workers’ annual pay rise forward in a sign, workers argue, that they’ve got bosses scared.

Jessie from the Post and Telegraph pub in Brighton spoke to Socialist Worker about how they have done it.

“There are two pubs in Brighton that are part of the strike,” he said. “We’ve been organising for just over six months. It’s been a struggle.

“Everyone is disaffected with the company and what it does.” 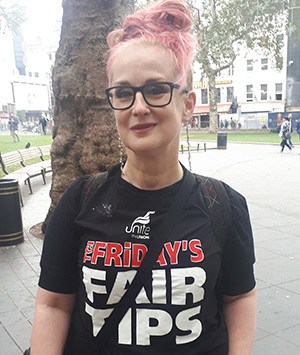 He described how more and more people have been coming to trade union meetings in the last couple of months. The shift came after people started organising together.

“We started by tackling small issues inside the pub. Rotas were a big issue, so was victimisation inside one of the pubs,” said Jessie. “We approached people and said, ‘We can address these things collectively.’”

“We fixed the small things together and then it was a natural step for people to join the union,” said Jessie. “It’s been an incredible process.”

All the workers involved in the strikes that Socialist Worker spoke to see themselves as part of that process—a movement for decent pay in a section of the working class often ignored. To be successful, that movement needs to look wider than parts of the working class deemed to be precarious.

Bfawu president Ian Hodson told the crowd, “No longer is it acceptable for workers in the sector to be oppressed or exploited. Employers are finding that workers are fighting back.”

TUC general secretary Frances O’Grady addressed last Thursday’s rally. She said, “Although these are small-scale actions, they are growing and spreading. What I find really touching is that these are workers from different companies coming out to support each other.”

The question is how to spread the strikes and get more workers involved.

You have to focus on people who have been there longer, go for the most experienced people and hopefully some of the rest will follow

Each strike by workers at a McDonald’s site or TGI Fridays restaurant raises the profile of the campaign. Each one makes the prospect of workers fighting back and winning a reality in people’s heads and there is more potential for victory.

What is really needed to challenge the Tories’ low wage economy is a change in the balance of class forces. Bosses won’t back down unless they are forced to.

In response to the strikes Wetherspoon boss Tim Martin said, “It is understandable that there is pressure on pay with low unemployment and a housing shortage.”

He offered a half-hearted defence of his poverty pay policy. “Bonuses, free shares and other benefits should be taken into account in assessing pay,” he said.

“I don’t think it would benefit employees overall if, as some suggest, Wetherspoon ended bonuses, free shares and other benefits, and increased the basic rate of pay.”

If the bosses are refusing to back down the alternative is to bring them to heel.

The Labour Party has positioned itself as the force in society capable of delivering this.

Labour shadow chancellor John McDonnell said, “A briefing went out to all MPs which said, ‘If a picket takes place in your constituency, it’s your responsibility to attend it.’

“It’s the responsibility of every MP and Labour Party member.”

That’s a welcome intervention. But what does it mean? Is it likely that Camden MP Keir Starmer will be visiting striking traffic wardens in his constituency? Demanding

Too often the Labour leadership has failed to call for effective support for other disputes.

One example is the Birmingham care workers, who are striking against their Labour council’s plans to rob them of their jobs and gut the service.

Low pay is rife, and doesn’t just affect sections of workers deemed to be the most vulnerable.

In a vivid example of this, striking traffic wardens from Camden came down to the Leicester Square rally in solidarity.

They are demanding a raise to £11.15 an hour from the outsourcing firm that employs them on behalf of Camden council—NSL.

“This is supposed to be a five-day a week job, but we’re effectively forced to work overtime,” they said.

The wardens stand a good chance of winning. Out of a workforce of some 200 people about 130 are members of Unison and, with some people either ill or on holiday, 100 of these are out on strike.

That kind of density is important for a strike to be effective and to hit bosses where it hurts—the bottom line.

“It’s almost a total shutdown. The council is losing big money, for sure,” said one warden.

And things are moving in the right direction in the fast food pay campaign. A worker from one of the two Wetherspoon pubs involved in the strike estimated that almost 40 workers had struck and travelled up to London.

“There are about 50 workers at each of the two pubs in Brighton,” they said, pointing out another important factor in organising in the food industry—high staff turnover. “We worked out that about 20 percent of staff won’t be there for more than two months.

“That means you have to focus on people who have been there longer, go for the most experienced people and hopefully some of the rest will follow.”

Numbers matter in the fight for decent pay, for workers’ rights, and for a different kind of society.

That means forging links of solidarity across industries and trade unions to create a movement capable of pushing forward where trade union leaders, and the Labour Party, won’t.

Unions must do much more to fight scourge of low pay

The strikes raise important questions about how to win decent pay.

The elephant in the room is that the big trade unions have singularly failed to mount serious pay campaigns on a national basis.

But holding up a comparatively small group of workers as the banner bearers of the movement against low pay is not enough.

Unite is highlighting its campaign at TGI Fridays to show that something is being done.

But what about the hundreds of thousands of workers in the public sector who have been left with below-inflation pay deals?

Meanwhile, too often the strategy is to wait for Labour to take office.

Labour shadow chancellor John McDonnell said on Thursday, “The message to every exploitative employer in this country—we are coming for you.”

But the battle has to be fought now, not left until a general election.

The courage of the striking workers stands in stark contrast to the cynicism of many trade union leaders.

Although many of their demands are different, the underlying reasons for the strike are the same.

Every day that passes prices are rising and wages are stagnating.

But despite the challenges, workers have shown they are up to it and they can organise themselves.

Inspiration from the US

Betty from the SEIU hospitality sector union in the United States spoke to Socialist Worker about how the brutal conditions working people are faced with are the same the world over.

“When I started I was making the equivalent of £5.57 an hour.

“The bosses don’t address anything other than the money they are making. They always refuse to come to the table and negotiate.

“I joined the Fight For £15 campaign and I’ve been fighting ever since. It started in the US and now it’s gone global.”

Why are you striking?

We are striking mainly over unstable pay, which is linked to lack of orders, and long unpaid waiting times. Another key issue for us is the lack of transparency—for instance, it is difficult to know how busy it is even though it is required by our terms and conditions.

Similarly, there is a lack of transparency over pay as it is now calculated per drop in addition to the distance while it used to be simply the former with no clear guidelines on how it is done based on distance.

What are your demands?

We need Deliveroo to increase the pay per drop to £5 (currently £3.90 in the case of Deliveroo and £2.80 for Uber Eats), pay for waiting times, not victimise strikers, and increase transparency.

It is up to the riders as to when steps need to be taken next but I would recommend a democratic structure to be set up with high participation rates. Additionally, coordination is key, geographically and within the industry.

Amazon workers coordinated transnationally in Italy, France and other countries to have a successful strike and this time, for example, we coordinated with McDonalds and TGIF workers which I believe is important given our status as gig economy workers.

Given the size of the company and its fast expansion, one of the main challenges is to mobilise a conscious workforce to have a coordinated fight.

Gig economy workers have demonstrated today that they can coordinate nationally. It represents a turning point in fighting low wage and precarious work. The question is whether workers and unions are up to the challenge. 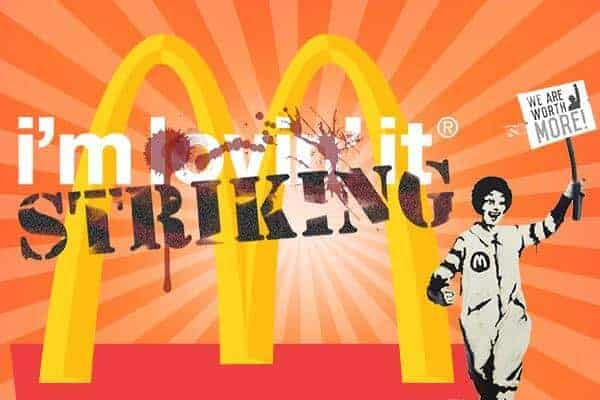 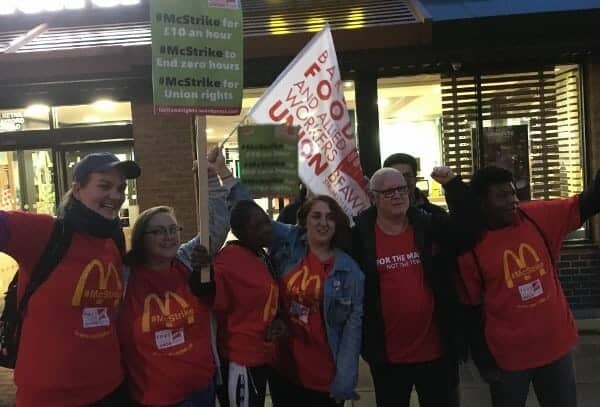 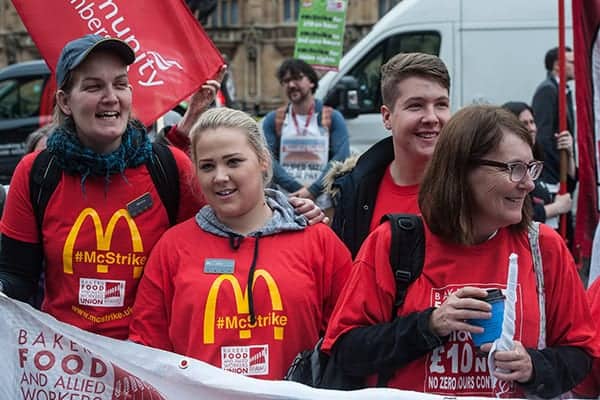 ‘We can win,’ say McDonald’s strikers at rally outside parliament 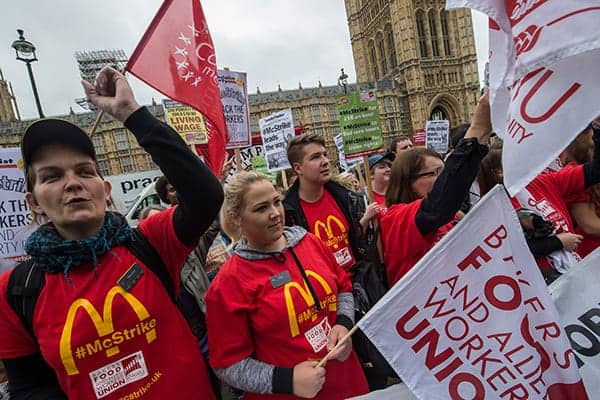 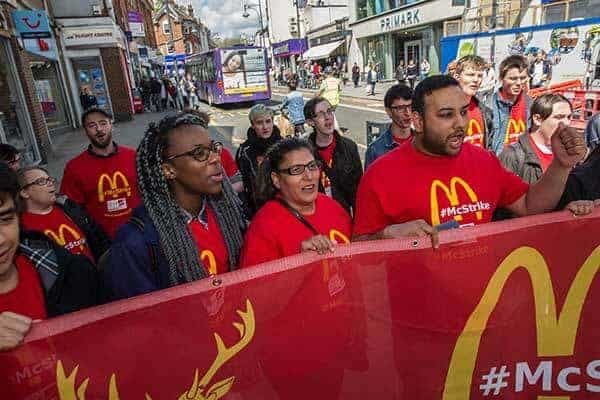 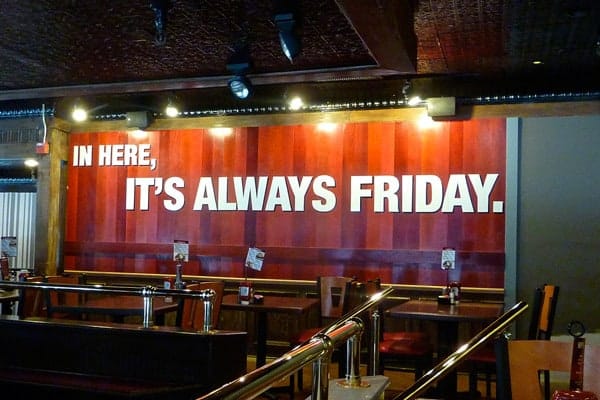 TGI Fridays workers to strike - but beware of divisions 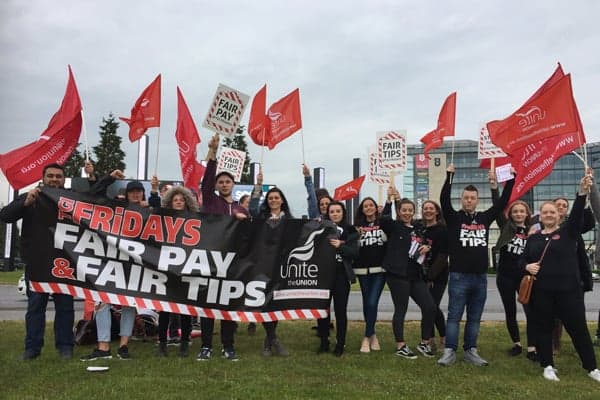 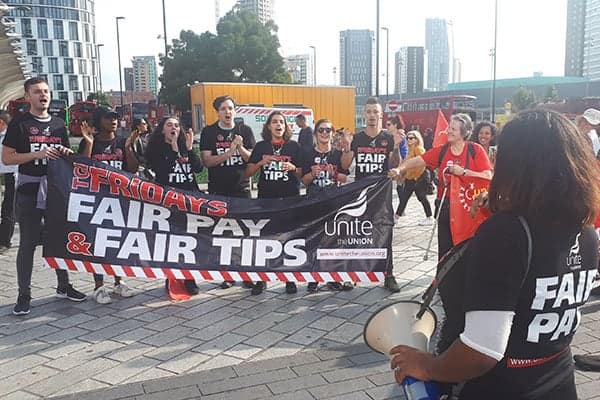 It’s time to unite the fight at TGI Fridays 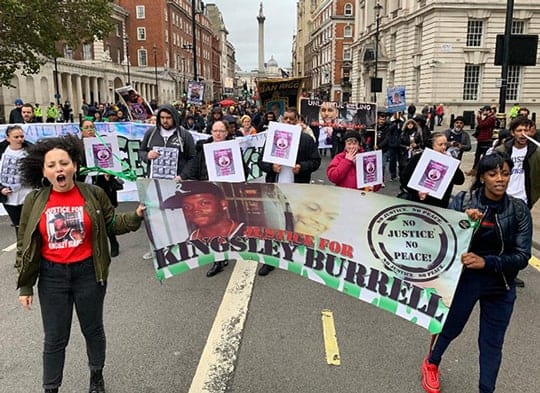