Campaign priorities in months ahead

The conference also heard from Jane Loftus, president of the CWU postal workers’ union, François Duval from France’s Ligue Communiste Révolutionnaire, Sami Ramadani from Iraqi Democrats Against the Occupation, Andrew Murray, chair of the Stop the War Coalition and Derek Wall from the Green Party.

A number of motions were passed on the structure and the future of Respect. One on building the coalition included an amendment arguing against the attempts to witch-hunt the Socialist Workers Party (SWP).

At the end of the conference, John Rees called on delegates to build Stop the War’s World Against War conference next month and to move forward to help Respect grow as a vibrant organisation of the left.

“At our last conference we voted to broaden Respect’s base so that it could become a national force – that remains the priority,” he said.

“The key now is building Respect. In Preston we face a crucial council by-election in January – and we will be campaigning to win.

“Across the country Respect branches should be holding public meetings on gun and knife crime and on Pakistan. And all of us must campaign in defence of health union activist Karen Reissmann.” 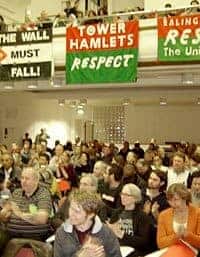