This article is over 18 years, 4 months old
IN TWO weeks time representatives of the world's governments will gather in Cancun, Mexico, for a crucial meeting of the World Trade Organisation (WTO). The collapse of the WTO meeting in Seattle almost four years ago, amid protests outside and rows inside, marked the emergence of the worldwide movement against corporate globalisation.
By Paul McGarr
Downloading PDF. Please wait...
Saturday 30 August 2003

IN TWO weeks time representatives of the world’s governments will gather in Cancun, Mexico, for a crucial meeting of the World Trade Organisation (WTO). The collapse of the WTO meeting in Seattle almost four years ago, amid protests outside and rows inside, marked the emergence of the worldwide movement against corporate globalisation.

Cancun will certainly see demonstrations outside, and bitter arguments inside. A key issue will be trade in agricultural products, and agricultural subsidies. The world’s major powers, the US and the European Union, proclaim the virtues of ‘free’ trade and trade ‘liberalisation’. In the name of this ‘neo-liberal’ creed they demand countries open themselves up to US and European corporations. Everywhere this leads to a recipe based on the same basic ingredients-privatisation, welfare cuts, paying debt to international bankers, export production for the world market and a free hand for multinationals.

To enforce the neo-liberal recipe the world’s major powers use bodies like the WTO, the International Monetary Fund (IMF) and the World Bank. Yet a stinking hypocrisy lies at the heart of this dogma. Those who preach it the loudest are the worst sinners against their own commandments.

The US and European Union pour vast subsidies into ensuring that ‘their’ agribusinesses can sell products, capture markets and make profits across the globe. They don’t care if, in the process, producers in poorer countries go to the wall and people are thrown into poverty. World Trade Organisation figures show that overall US subsidies in agriculture were $67 billion in 1999. The European Union did even better, with some $86.6 billion.

The US government pours $3 billion in subsidies into cotton production, equivalent to $230 an acre. That allows US producers to make profits while selling at low prices, so grabbing 40 percent of the global market. Meanwhile producers in Burkina Faso in Africa, who the IMF and World Bank encouraged to produce cotton for the world market, can’t compete with the US and go bankrupt.

This is not an isolated case or an accidental effect. It is the entire aim of US and European Union policy. George Bush says the aim of US trade policy is that ‘we want to be selling our beef and our corn and our beans to people around the world’. The European Union is equally blunt. Its official policy is ‘to consolidate its position as a major world exporter’.

US and European subsidies are not about helping small farmers in those countries survive. They are handouts to big businesses which dominate agriculture in the US and Europe. The richest 20 percent of farmers in Britain get 80 percent of the subsidies from the European Union’s Common Agricultural Policy. Some have reacted to all this by focusing on trade rules as the central factor to reducing global poverty. They argue that ending US and European Union agricultural subsidies is the key to tackling world poverty.

This, they say, would create ‘a level playing field’ in world trade, allowing poor countries to sell more, and so tackle poverty. Clare Short, the former New Labour development minister, was a hardline advocate of this approach.

Now even the charity Oxfam believes that this is the only way to topple global injustice. Oxfam cites the first of its ‘main policy goals’ as ‘improving market access for poor countries and ending the cycle of subsidised agricultural overproduction and export dumping by rich countries’.

But this kind of ‘free trade’ is not the answer to the iniquities of the current system. To see why you only have to look at the world coffee market. Coffee is one agricultural product in which there is something approaching a ‘free market’ or ‘level playing field’. Yet this has brought disaster for coffee farmers in poorer countries.

The World Bank and IMF told countries like Vietnam to produce coffee for export to earn cash to service debts. This resulted in ever more coffee being produced and the global price falling. Big producers like Brazil responded by increasing production to maintain profits, fuelling a vicious spiral of collapsing global prices. This brought ruin and starvation to coffee producers in central America and Africa.

The five global coffee corporations-Nestlé, Kraft, Procter & Gamble, Sara Lee and the German-based Tchibo-have seen profits soar. Oxfam has rightly pointed out that ‘the coffee companies are laughing all the way to the bank. In the free market their global reach gives them unprecedented options.’

Meanwhile, it notes, ‘at the other end of the value chain the market does not feel so free.’ That is the point. To focus on trade rules, and hopes of a ‘level playing field’, does not address the central issue. Oxfam recognises when discussing the coffee crisis that ‘existing market- based solutions-Fair Trade and the development of speciality coffees’ cannot solve the global problem.

‘A systemic not a niche solution is needed,’ it rightly says. The reality of that ‘system’ is a world dominated by giant corporations, and the powerful states and global institutions which serve them. There can be no ‘level playing field’ between a giant corporation like Kraft, backed by the world’s powerful states and institutions, and impoverished countries like Nicaragua or a small coffee farmer in Honduras.

A football match between Real Madrid and a local pub team would not be a ‘fair’ competition just because both teams abide by the same rules. This is not an argument for saying nothing can be done until we end global capitalism. There are immediate measures that could begin to tackle global poverty. Sinking the WTO’s planned GATS agreement, which enforces privatisation of public services across the world, would be one.

Blocking the TRIPS agreement, which allows pharmaceutical corporations to deny vital drugs to the poor, would be another. TRIPS also helps the corporations impose genetically modified crops around the world. Perhaps the most effective single step though would be debt cancellation. All the coffee-producing countries have lost out by $4 billion in the last five years due to collapsing prices.

But just three of the smallest of those countries-Honduras, Vietnam and Ethiopia-paid $4.7 billion in debt payments in 1999 and 2000. The global campaign demanding debt cancellation pushed world leaders to promise action on debt. But the reality is that many of the world’s poorest countries are paying more, not less, than a few years ago. In 2002 Nicaragua’s ‘debt service’ (interest payments) jumped by 60 percent and Honduras’s by 93 percent.

The Jubilee debt campaign identified 53 countries as most needing debt cancellation. The interest these countries pay has risen, not fallen, from $21.9 billion in 1998 to $25 billion in 2000. Cancelling this crippling burden would begin to transform people’s lives across the world.

It would also begin to challenge the mad system where the IMF and World Bank force countries to produce for the world market to earn foreign currency to meet debt payments. That chase always ends in failure and misery for the poor. Walden Bello, of Focus on the Global South, has been one of the most well known spokespersons for the movement against corporate globalisation. He argues, ‘The focus on market access misleads people into believing that it is access to the markets of the North that is the central need and central problem of the global trading system. Far from it. The central problem is the paradigm of free trade that the WTO is relentlessly imposing.’

Bello notes that the WTO can ‘support market access campaigns launched by Oxfam…so that they can increase their leverage on the developing countries to agree to more liberalisation in areas deemed more critical to the WTO and the big trading powers. These areas are industrial tariffs, services, and the trade-related areas investment, competition policy, government procurement.’

A narrow focus on trade rules at best moves away from the real issues and measures which could begin to challenge global injustice and poverty. At worst it can even end up fitting with the agenda of those who want to extend corporate globalisation at the expense of the world’s people.

For more information and to follow the debate see these websites:

Focus on the global south, www.focusweb.org 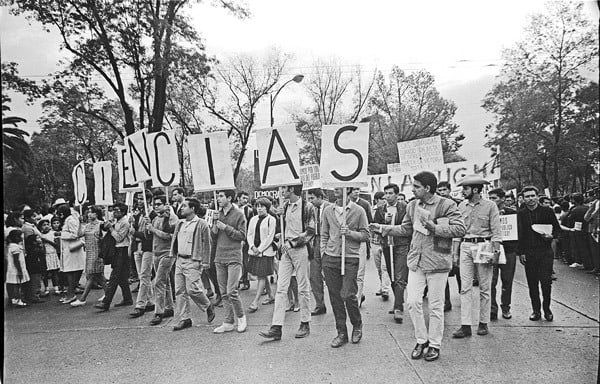 Massacre at the Mexico Olympics

Take the movement to a new level