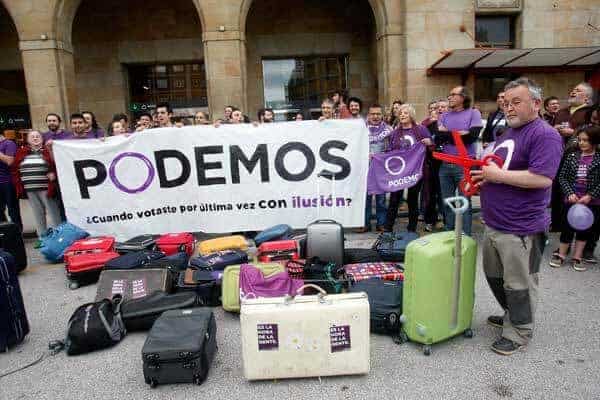 Podemos, a new left-wing party, is making big waves in Spain. With its name meaning “yes we can”, it claimed fourth place in the European elections with well over a million votes. This is remarkable considering it was formed just four months ago.

Iglesias launched the party after rising to prominence through his left wing TV programme La Tuerka.

It calls for a basic minimum income for all citizens to reduce poverty and it also calls for clamping down on tax avoiders. And, it rejects the agreements with the EU that mean devastating cuts to pay back the bankers’ debts.

The new MEPs have also pledged to take home a salary no higher than three times the minimum wage. This sets Podemos apart from the Tory PP that’s pushing the cuts through, as well as the Labour-type PSOE that had previously changed the constitution to limit public spending.

Even the Communist Party-led United Left (IU) has been tainted by its participation in regional governments that have made cuts.

But it’s the “Circles” through which Podemos organises that bring a sense that something new and different is happening.

These are mass assemblies where hundreds of people come together to debate and organise, often initiated by activists with no prior contact with the party leadership.

Hundreds of Circles were organised before the elections, and even more since.

“It has been amazing,” says Jesus Castillo, a Podemos candidate in Seville and a member of the revolutionary socialist organisation, En Lucha.

“We now have Circles in every neighbourhood of the city and many of the surrounding villages. A few things made it possible. There’s Iglesias, and there’s the networks of activists that grew up through the movements against austerity.

“And there’s the sense that we are different from other parties. When you see a politician say something you won’t believe them. But when you see an ordinary person like yourself saying something with energy and hope you believe them.”

The politicians didn’t see Podemos coming and the opinion polls predicted it would only get 1 percent of the vote. But it didn’t come out of nowhere. It is a product of three years of crisis and resistance.

Though there had been a general strike in 2010, the current round of protests exploded onto the scene on 15 May 2011, known now as 15M.

Millions of young people occupied city squares calling for “real democracy”. It, and the struggles that followed, were fuelled by anger at the economic crisis, especially among the young. Youth unemployment was then close to 50 percent and has kept rising since.

There was also a series of high profile suicides of people evicted from their homes.

These came at a time when 100,000 such evictions were taking place every year. But 15M also reflected a bitterness towards party politics, and a sense that they could never be the solution.

A common reaction was to boycott official politics, building an alternative in the streets. But many of the same activists are now building Podemos Circles.

“There was a big distance between what the movements have achieved and the political impact they’ve had,” explains journalist Nikos Loudos.

“Since 15M there has been the struggle that stopped hospital privatisation in Madrid, and a huge movement against evictions. A big teachers’ strike in the Balearic Islands stopped educational reforms last year. It was built from below, by holding mass assemblies to overcome the union bureaucracy.

“These are very advanced movements, but in a political desert. And they haven’t necessarily become international or even national events because that political challenge has been missing. But they have created a sense that we are the majority and that we can win—and that’s put pressure on the movement to politicise.”

Podemos is a huge step to meeting that demand. But the process is only beginning. 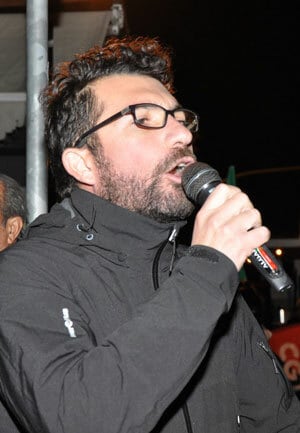 “The Circles are full of new people all the time,” says Jesus. “They are where we discussed the arguments for not paying the debt and for a referendum or constituent process to replace the monarchy. But most of all they are places for organising.”

Podemos contains people from a wide range of political backgrounds and none. Some, including En Lucha are anti-capitalist.

The more moderate leadership around Iglesias takes inspiration from Syriza, the radical left party that hopes to be the next government in Greece. It also looks to the government established by Hugo Chavez in Venezuela.

Its positions on such crucial issues as Catalan independence are ambiguous, and it calls for reforming the EU not leaving it. It focuses on citizens rather than classes, and the political “caste” rather than the state that lies behind it.

These positions will be tested as the crisis, and the struggles against it, bring new questions to the fore. So the debates that take place in the Circles are just as crucial as their growth.

“Podemos is very new and we are still building it,” said Jesus. “We don’t have much space for political debate—there is so much to organise. But we are trying to get more, and it’s early days.

“Podemos is useful as a voice for the movement, and as a space inside it. As En Lucha members we can raise debates about relating to people who are active in other struggles.

We talk about organising in the workplaces—which is where people have the most power.

“And it’s an opportunity to grow as a revolutionary organisation. Podemos is a tool to fight neoliberalism, but it hasn’t yet grown over into the tool that can take us beyond capitalism.”

Crisis of legitimacy creates a sense anything is possible

The Spanish state has never been able to guarantee the legitimacy and stability that capitalists crave.

Its two most important industrial regions, Catalonia and the Basque country, lead a pack of smaller nations that have never been fully subsumed into Spain. These also have long histories of independence movements.

Its capitalist class developed too late to carve out its own dominance between the relics of feudalism and the emerging working class.

Reunifying the splintering state took a fascist coup and a bloody civil war to crush a revolution. The current set up is the “regime of ’78”. It was created after the death of dictator General Francisco Franco in 1978 by the king Franco had groomed from childhood to replace him.

The king was able to ensure a smooth “transition” to a constitutional monarchy that would allow Spanish capitalism to develop. And the PSOE and Communist Party, eager to take part in elections, helped sell the fairytale that the king had brought democracy.

But now that regime is buckling under the pressure of the crisis.

The monarchy has infuriated people with its corruption and arrogant opulence. The PSOE and PP have fallen to less than 50 percent of the vote between them.

And the rapid growth of support for independence is pushing the conservative Catalan government towards a major confrontation with Madrid in November.

“There’s now a sense of disintegration, a sense that anything is possible,” says Andy Durgan, a socialist based in Barcelona.

“We had mass protests for a referendum about the monarchy. Here in Catalonia, that demand for a republic has dovetailed with the demand for independence. The idea that things will be better after independence is an illusion. But it brings into question the whole setup of ’78.”

Juan Carlos’ abdication last week was intended to help reinvigorate that set up—but it could have backfired.

“The ruling class want to put a new face on the Spanish state, replace the king, bring in a federal system,” says Jesus Castillo. “But it will be very difficult for them because the people are organised and because the crisis is so deep.” 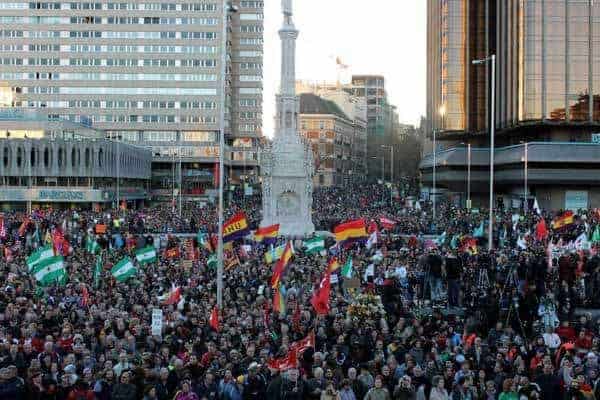 Masses in Madrid call for an end to austerity 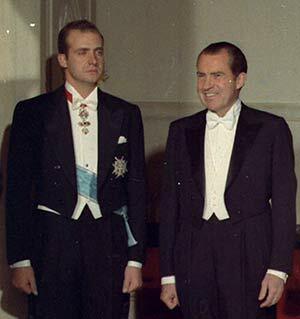