Carnival of resistance to laws of the market

This article is over 19 years, 11 months old
Two forums, two visions of the world. That's what is taking place at opposite ends of the American continent this weekend. The world's rich and representatives of global corporations are gathering at their World Economic Forum in New York. In the Brazilian city of Porto Alegre tens of thousands of people are converging for the World Social Forum, which challenges everything the New York meeting stands for.
Downloading PDF. Please wait...
Saturday 02 February 2002

Two forums, two visions of the world. That’s what is taking place at opposite ends of the American continent this weekend. The world’s rich and representatives of global corporations are gathering at their World Economic Forum in New York. In the Brazilian city of Porto Alegre tens of thousands of people are converging for the World Social Forum, which challenges everything the New York meeting stands for.

The World Social Forum’s message is being carried to the streets of New York too, with a wide range of organisations planning protests there. Over 30,000 people are expected in Porto Alegre. This gives an indication of the massive swell of feeling across the world against capitalist globalisation. It is just 26 months since the great protests at the World Trade Organisation meeting in Seattle.

The series of demonstrations and counter-conferences since have forged a new global movement that challenges the rule of the market and big business. Leading figures of that global movement like Noam Chomsky, Walden Bello, Susan George and many more are speaking at the forum. Frei Betto and Michael Lowy wrote the draft declaration for the World Social Forum. Betto is a leading figure within Brazil’s Faith and Politics group.

This is a left wing Christian group influenced by the radical ideas of ‘liberation theology’. Lowy is a French-based intellectual who openly proclaims his Marxist ideas. Their Porto Alegre declaration, ‘The Values of a New Civilisation’, is a powerful attack on global capitalism and a call to arms to fight for a better world.

They denounce global capitalism as ‘an imperial dictatorship, under the economic, political and military domination of the US, which hides behind the anonymous and blind ‘laws of the market’. ‘It is a dictatorship which works through the logic of capitalism. It works with the help of profoundly undemocratic institutions like the International Monetary Fund and World Trade Organisation, and under the threat of their armed wing, NATO.’

They challenge ‘the monstrous inequality between the North and South of the planet and, inside each country’. Nor is it, they insist, good enough to hope that ‘another world is possible’. Instead ‘tomorrow begins here and today, in our movement, in social struggles.’ Many of those in Porto Alegre share that vision, and are debating how it can be translated into a fundamental challenge to existing society. But such has been the power of the movement against capitalist globalisation that people with a different outlook will also be in Porto Alegre. The clearest example comes from France.

The French government is part and parcel of the institutions of capitalist globalisation, from the International Monetary Fund and World Trade Organisation to NATO. It has key ministers at the World Economic Forum in New York. Yet it also has no fewer than six ministers at Porto Alegre. One of the leading contenders in this spring’s French presidential election, former minister Jean Pierre Chevenement, has also joined them in the Brazilian city.

Chevenement’s answer to the world’s problems is a return to ideas of national sovereignty and a strong national state. His ideas have won him the support of right wing forces in France and would sit well with sections of Britain’s Tory party. French Tory president Jacques Chirac has also sent his personal envoy as an observer to Porto Alegre.

A series of conferences in Porto Alegre were taking place this week, linked to the World Social Forum. The Forum of Local Authorities has the mayors of Rome, Paris, Brussels, Lisbon, Buenos Aires and the like taking part. None of them has any record of challenging the existing order. Forces

The World Forum of Judges, also taking place in Porto Alegre, is unlikely to call for a struggle to overthrow corporate power and global capitalism either! There are other forces in Porto Alegre too. The international equivalents of figures like British writers Will Hutton and Larry Elliot are there in force.

Such people attack bodies like the International Monetary Fund. But instead they argue for mild reform of this and other institutions, and more state intervention in the market. The result of this wide mix of forces is likely to be some sharp debate in and around the forum.

Helen Shooter will be in New York joining the protests outside the World Economic Forum. Our team reporting from Porto Alegre includes Alex Callinicos and Mike Gonzalez Make sure you get your copy! 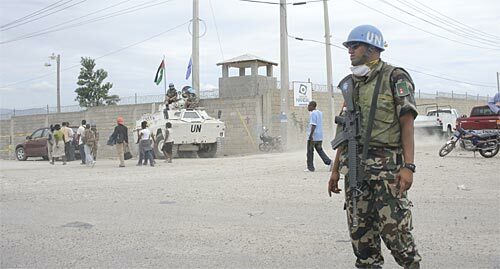 Message from World Social Forum in Porto Alegre, Brazil: 'We know another world is possible'