This article is over 19 years, 7 months old
A NEW series of the History of Britain with Simon Schama started last week on BBC 2 with the turmoil created in Britain after the French Revolution of 1789. The popularity of these programmes shows people are interested in history and how soci
By Judy Cox
Downloading PDF. Please wait...
Saturday 08 June 2002

MANY PEOPLE have heard about the great revolution in France in 1789. But they think nothing much happened in Britain at that time. This is not true. The events inspired political and economic revolution in Britain and led to the birth of a new class. Eighteenth century Britain was shaped by the revolution that took place in England much earlier, in the 1640s.

Oliver Cromwell had mobilised an army of ordinary citizens against the tyranny of bishop and king. The revolution had overthrown the brutal domination of feudalism and ended crown monopolies over trade.

It led to King Charles having his head chopped off. Wealth increasingly depended on competing to produce and sell goods on the market, rather than just inherited property. The English Revolution paved the way for the development of capitalism. In the late 18th century this development speeded the industrial revolution up. Small producers were thrown off the common lands and swallowed up by the large scale industry. They were forced to become wage labourers.

There were new techniques and machines for producing and transporting goods. Masses of people moved from the countryside to the towns and places like Manchester, Leeds, Sheffield and Birmingham mushroomed. Hundreds and thousands of labourers were brought together for the first time into the same factories, enduring the same agonising conditions.

This bred a new solidarity and strength among workers. John Thelwell, a radical working class leader, saw how capitalism was creating the seeds of its own destruction. ‘Monopoly and the hideous accumulation of capital in a few hands carry in their own enormity the seeds of the cure. Whatever presses men together, though it may generate some vices, is favourable to the diffusion of knowledge, and ultimately promotes human liberty. Hence every large workshop and manufactory is a sort of political society, which no act of parliament can silence, and no magistrate disperse.’

He was to be proved right. The workshops and manufactories became breeding grounds for radical ideas to take hold. These ideas were drawn from earlier traditions and, above all, from the French Revolution.

In 1789 the Parisian masses had risen up and stormed the hated Bastille prison. It was the first act of a great revolution. It rocked the British establisment. All the propertied classes became terrified of the ‘swinish multitudes’. Many of the artisans and labourers supported the ideals of that revolution-liberty, equality and fraternity.

They were inspired to form their own political organisations. The London Corresponding Society, set up in 1792, had some 10,000 members at its height. These societies fought to give every man the vote, as had happened in France. They saw it not as an end in itself, but as one step on the road to greater economic and social equality.

THE GOVERNMENT in Britain was terrified at the forms of opposition that were beginning to grow. It outlawed the corresponding societies. But the working class movement was constantly taking shape and learning new ways to fight.

Thousands of impoverished weavers turned to direct action, breaking the knitting frames they rented from their masters. This became an organised uprising, known as the Luddite rebellion. It swept across north Nottinghamshire and Yorkshire in 1811 and 1812. One appeal issued by ‘General Ludd’ urged, ‘Come let us follow the noble example of the brave citizens of Paris who in sight of 30,000 tyrant Redcoats brought a tyrant to the ground.’

It took thousands of troops and public executions to crush the movement. Workers in industrial towns and villages began agitating over the issue of widening the vote.

A mass demonstration was held in St Peter’s Fields, Manchester, in 1819. The militia charged on the peaceful procession, killing 11 and injuring 400 in what became known as the Peterloo Massacre. Workers also turned to trade unionism to pursue their aims, despite the repression. The Tolpuddle Martyrs were transported to Australia in 1834 for trying to organise a trade union.

And working people also rose up against the hated new poor houses that imprisoned the poor and tore families apart. The working class movement was constantly learning how best to fight, and raising new political debates.

The new militants looked to the industrialised workers who created the wealth in society while the old radicals harked back to a lost world of small, independent producers. The militants saw exploitation at the heart of capitalism. ‘The workman is the source of all wealth,’ proclaimed the Lancaster Co-operator. ‘Yet the labourer remains poor and destitute, while those who do not work are rich, and possess abundance to surfeiting’.

ALL THE different movements and issues came together in a national political movement in 1839. The campaign for the Charter, for an increase in the right to vote and political representation, meant the opening up of a new era in working class history. The Chartist movement was as important for the future as the French Revolution and the industrial revolution were.

It gripped the imagination of the industrial masses like nothing before. Whole communities got involved, with women playing a particularly prominent role. The Chartist paper, the Northern Star, had a circulation of 60,000 a week, which rivalled the bestselling newspaper, the Times.

When the first petition to parliament was rejected, rumours of revolution spread. Thousands of Chartists practised drills in preparation for an uprising. An uprising in Newport, South Wales, in 1839 was crushed. Despite months of repression, a new National Charter Association won mass support. Over three million people signed the second national petition.

This petition focused even more on working class people’s concerns, such as working hours, poor wages and unhealthy workshops. In the summer of 1842 a strike wave swept across the Midlands and the north of England.

It became the first general strike in history. But the Chartist leaders were divided between those who believed in persuading the ruling class by’moral force’ and those who were convinced the rulers would have to be overthrown. The government seized its chance to smash the strike wave and arrested some 1,500 activists.

The movement rose again in 1848, inspired by rebellions in France and Ireland. The government began to panic, fearful of the spectre of revolution that was haunting Europe. Some 100,000 people gathered in Kennington Park, south London, but the government had seized the momentum to crush the movement.

But for the first time in history the working class moved onto centre stage, organising and fighting in their own interests as a collective class. They lacked the ideas and organisation necessary to overthrow their oppressors, but their struggles revealed their potential power to end the system of exploitation and oppression.

The Chartists inspired Marx and Engels to see the working class not only as the gravediggers of capitalism but as the force that could establish a democratic and equal society. 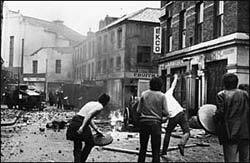