This article is over 12 years, 2 months old
A wave of student rebellion swept the world in 1968. In Britain the London School of Economics (LSE) was at the centre of events. Former LSE student John Rose remembers Chris Harman’s pivotal role during the upheavals.
Downloading PDF. Please wait...
Tuesday 10 November 2009

‘But, Chris, didn’t Mao lead a genuine revolution in China in 1949?” This was a shout as well as a question, and it reverberated across the London School of Economics (LSE) student canteen.

Later, Tory students would claim that the raucous din at the LSE SocSoc (Socialist Society) canteen table was just a ruse to draw attention. But it wasn’t true. In time a few of us first year novices from the autumn 1966 intake would inch our chairs closer and closer to the esteemed table.

Chris Harman was usually to be found at the centre of the rows. Later, as I got to know the person behind the polemics, I was struck by the depth of his reading.

And it wasn’t just politics. After the fourth or fifth pint of what became our regular drinking sprees his infectious enthusiasms for the collected works of Marx, Lenin, Trotsky, Luxemburg and Gramsci were seamlessly, if a little mysteriously, replaced by his passions for the novels of Honoré de Balzac and Gustave Flaubert.

He’d be highly amused (and I think he’d approve) that I was reporting to a Socialist Worker audience his complete grasp of the emotional crisis and controversy at the heart of Flaubert’s Sentimental Education.

That year, the canteen table clique suddenly found its Marxist credentials put to the severest of tests. An increasingly frenetic round of student union meetings erupted in the LSE’s Old Theatre.

The decrepit LSE authorities had decided to appoint a new director from the illegal white racist regime of Rhodesia (today’s Zimbabwe), and the students weren’t having it. A mass movement was in the making. Little did we know at the time that this was one of a million sparks that would explode in 1968.

But would the clique relate to the mass movement? Here Chris was crucial. Already a member of the International Socialists (IS) group and in regular discussion with the group’s founder, Tony Cliff. Chris knew that the clique had to open up.

Sometimes awkward in his personal relations, as were some of the other “hardliners”, a few of us served as a kind of bridgehead to the wider student movement for him.

There were two issues at stake – developing appropriate tactics for the struggle and widening the Marxist debates that had already begun. And the two were linked.

Mass action from below – especially the sit-in tactic – had been pioneered by the workers’ movement, as well as by the US civil rights movement in the early 1960s. This fitted the new movement perfectly.

But as the student movement took off it developed a momentum of its own, replete with its own ideology. It developed a naive belief in its own independent strength, galvanising a spontaneous hippy anarchism, which at first was almost a “natural” ideology for student rebels.

Later it came close to turning solidarity with “peasant guerrillas” into a kind of identity cult. The Vietnam War was raging, with the Vietcong peasant guerrillas leading the resistance to US imperialism.

We were somehow their urban counterpart. Elite actions by a self-selecting minority to “provoke” the authorities became a fashion. Mao became a potential icon – hence the critical importance of answering the question about what kind of revolution Mao had made.

Tremendous skill was required to expand the base of LSE SocSoc in the burgeoning student movement while minimising the influence of the “studentist” cult and trying to win rather than alienate its supporters.

He was far too modest about his own role in his quite outstanding book about 1968.

The IS group became the dominant political tendency at LSE with a reach right across Britain as the student movement took off nationally.

In a different context, Lenin once wrote about the need to “patiently explain”. This was Chris’s great gift, grounded in a profound grasp of the inner class dynamics of a society that seemed on the brink of momentous upheavals.

The youthful would-be revolutionaries were learning a vital lesson. We needed to take action, but never mindlessly. It was always to be tempered by ideas thought out, and argued through. 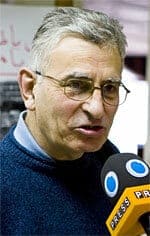 ‘Suddenly we had an audience’ - Chris Harman on Socialist Worker