This article is over 8 years, 11 months old
Conditions for meat processing workers are barbaric. Most are paid the minimum wage to work long hours in the cold and damp.
Downloading PDF. Please wait...
Tuesday 19 February 2013

Conditions for meat processing workers are barbaric. Most are paid the minimum wage to work long hours in the cold and damp.

The skilled workers are the boners. They get paid £9.60 an hour.

But they generally finish their working life in the meat industry by their mid thirties.

Boners work with a gauntlet and a long knife. They wear chainmail to protect their crotch.

The going rate for a boner who cuts themselves is £250 per stitch.

Firms pay them the money to stop them making a health and safety complaint.

Meat inspection by the government’s Meat Hygiene Service (MHS) has been steadily deregulated over the past two decades.

To put it simply there are no vets from the MHS in large abattoirs on the night shift and none at any time in small abattoirs.

The government has slashed trading standards officers, who would be responsible for detecting mislabelled meat.

There was also a 29 percent drop in prosecutions.

These agencies are far too close to the powerful industry. The former head of the Food Standards Agency (FSA), Tim Smith, is now Tesco’s technical director.

The FSA says that up to 6 percent of horses

But substituting horse meat for beef lets firms grab more than £258,000 extra in profits for every 25 tonnes. 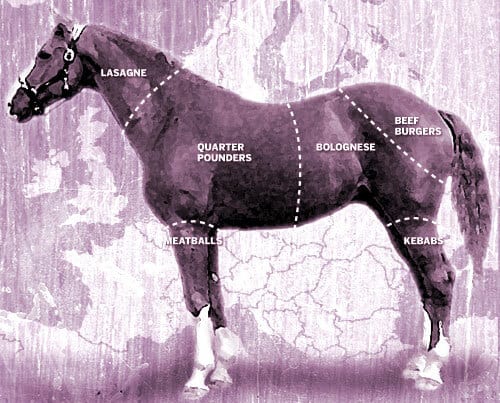 Hungry for a profit - why the market feeds us rotten food

Is the real problem that food is too cheap?