This article is over 13 years, 2 months old
Western leaders have condemned the fighting in the Democratic Republic of Congo. But as Leo Zeilig shows, the actions of the West lie behind the conflict
Downloading PDF. Please wait...
Tuesday 04 November 2008

The number of people killed in the ten years of war which has devastated the Democratic Republic of Congo (DRC) is truly staggering.

Between 1998 and 2003 the United Nations (UN) has estimated that the war led to the deaths of as many as 5.2 million civilians. It is the bloodiest conflict since the end of the Second World War.

This is not a “civil” war but an international one. It has pulled in neighbouring states that have armed rebel groups and involved Western multinationals and governments that supported different sides in their attempts to control mines and minerals in the DRC.

By any estimate the DRC should be a wealthy country. The eastern provinces of North and South Kivu – where the current fighting has erupted – are rich in gold, coltan and cassiterite (tin ore). Cassiterite, extracted from mines in North Kivu, is behind much of the recent fighting over control of the mines.

The war is presented in the West as an ethnic conflict, caused by hatred that has existed in the region for generations. This is rubbish.

Congo’s wealth has meant the country has been subject to continued intervention by the great powers, beginning with colonisation by Belgium in the late 19th century, and more recently by neighbouring African states that have been armed by the West.

David Miliband was in the DRC this week talking of sending in British troops. But every Western intervention has aided and abetted the bloodbath.

Current ethnic tensions are linked to those in other parts of the region – notably neighbouring Rwanda where 800,000 of the minority Tutsi group were killed in 1994 by members of the majority Hutu.

These ethnic tensions had been stoked up under years of colonial rule and boiled over when the collapse of the international coffee prices devastated the economy.

As the government that had backed the genocide was overthrown, many Hutus fled into eastern Congo. Though the majority of them had had nothing to do with the previous massacres, many refugee camps came to be run by those responsible for the killings.

Ethnic rivalry is still the cover under which the bloody plunder continues unabated. But the fighting today is not to defend Tutsis.

Take Laurent Nkunda and the group he leads, which is responsible for much of the recent violence around Goma, the capital of North Kivu.

Nkunda is not, as he proclaims, “defending local Tutsis” from the vengeful “genocidaires” – those responsible for genocide. He is a warlord controlling vital mining interests for his Rwandan bosses.

Francois Grignon of the International Crisis Group explains, “Nkunda is being funded by Rwandan businessmen so they can retain control of the mines in North Kivu.

“This is the absolute core of the conflict. What we are seeing now are beneficiaries of the illegal war economy fighting to maintain their right to exploit.”

At the same time the president of the DRC, Joseph Kabila, has refused to break ties between the Congolese armed forces and Rwandan Hutu militias who control lucrative mines.

Yet history has shown that there is an alternative to ethnic fighting and squabbling over resources. From 1990 Zaire – as the DRC was then known – was rocked by protests and an urban opposition movement that threatened the dictator Joseph Mobutu.

Most of the country’s major cities and towns rejected the ruling party.

The highpoint of these protests came in 1992 when a million people marched in the capital Kiushasa and many more in other cities. Between 1990 and 1994 Mobutu was almost toppled by a grass-roots opposition movement led by trade unions, students and the poor.

But failings in the leadership of the opposition movement saw Mobutu cling on to power.

Opposition now shifted to the east and focused on the exiled rebel leader Laurent Kabila – Joseph Kabila’s father – who claimed a radical past. Kabila’s rebels marched on Kinshasa. They were funded by Western companies, assisted by US army logistics and the Rwandan and Ugandan armies.

They saw supporting Kabila’s rag-tag army as an opportunity to exert their influence in the mineral-rich east of the country.

In May 1997 Kabila’s troops overthrew the Mobutu regime. Zaire was renamed the Democratic Republic of Congo.

Having taken power, Kabila came under pressure from internal forces not to be a stooge for neighbouring powers. He broke with his Rwandan and Ugandan backers in 1998.

Both countries then tried to overthrow their old ally. Quickly a war broke out – pitching Angola and Zimbabwe in support of Kabila against Uganda and Rwanda. But soon Uganda and Rwanda fought each other for control of mining provinces in the east of the DRC.

Both Rwanda and Uganda use the continued presence of those responsible for the Rwandan genocide in areas bordering their countries to justify their presence in the DRC. This is a fig leaf disguising their exploitation of Congo’s resources.

Each supports, sets up and funds militias to further their own projects in the Congo.

In the initial stages the Rwandan and Ugandan military simply plundered stockpiles of timber, minerals and livestock. But as time went by they became directly involved in extracting wealth from the Congo.

For example in the Walikale region, the Rwandan army forced local communities into mining for coltan – a mineral ore vital for mobile phones and laptop computers. In 2000 coltan was earning Rwanda $20 million a month.

Behind these regional players stood Western governments. The US and Britain gave high profile economic, political and military backing to both states.

Western companies were heavily implicated. A UN panel of experts concluded in 2002 that foreign companies “were ready to do business regardless of elements of unlawfulness… Companies trading minerals which the panel considered to be ‘the engine of the conflict in the Congo’ have prepared the field for illegal mining activities in the country.”

In 2003 the South African government brokered a deal aimed at holding elections in the DRC in 2006.

Western multinationals that had cooperated with local militias that controlled mines now felt more confident to work in the new “legal” environment.

But more atrocities took place under the new deal.

The mining giant AngloGold Ashanti (formerly Ashanti Goldfields) has worked with a local militia to ensure the company could access gold reserves around the town of Mongbwalu.

This band introduced a brutal regime of “community labour” – a euphemism for slave labour.

The fighting continued despite the promise of elections. Militias funded and supported by Rwanda continued to operate with impunity. Meanwhile the national army – supported by the government in Kinshasa – fought for control of the mines in alliance with Hutu-led rebel groups.

Western governments have a direct hand in supporting and arming Rwanda, while mining giants often directly buy up and export the minerals mined by militias.

Take one example. Afrimex is a British company and has long traded in minerals extracted from the eastern DRC.

The company made payments to one rebel militia group then bought minerals mined with forced and child labour. In 2007 Afrimex was still listed as an importer of cassiterite from Goma.

Afrimex was one of several British companies named by the UN report in 2002 as benefiting from and promoting the war in the DRC.

Britain and the US are Rwanda’s principal allies. If Nkunda’s rebel army is Rwanda’s proxy in the DRC, so Rwanda is also the military and political proxy for the US and Britain.

But the key element in understanding this relationship is not to see it in terms of helpless African governments under the heel of Western states.

There is a real convergence of both interest and profits between an imperial ruling class, carving out influence and wealth in the region, and an African elite profiting from and participating in the plunder that it often orchestrates.

In response to the conflict in the east many demand more robust intervention from the UN. The UN has its largest peace mission in the DRC – approximately 17,000 UN soldiers are deployed in the east of the country.

Monuc – the name of the mission – is regarded internationally as a laughable failure, and for those living in the east of the DRC it is looked on with disgust. Last week UN forces were pelted with stones by people fleeing the fighting.

The history of the UN in the Congo is a story of complicity with imperialism. The UN’s first military intervention was in the Congo in 1960. The country’s first prime minster, Patrice Lumumba, hoped that the UN would force foreign mercenaries to leave the country. Instead it collaborated in his assassination.

The UN is not the solution to the fighting. Nor is the “responsible investment” advocated so adamantly by the NGOs that have detailed the human rights abuses in the eastern DRC.

Further involvement and “investment” from Western companies would be a disaster. The war has been fought by armed groups connected to a globalised market of looted minerals bought and traded by multinationals in the West.

The pillage of the African continent is accelerating. The scramble for mineral and oil wealth is the product of a renewed round of imperialist competition. Multinationals and governments from the US, the European Union and China are competing for access to the continent’s extraordinary wealth.

This is a disaster for millions of people across Africa.

Weeks before he was murdered by Belgian and Congolese agents, Lumumba wrote:

“History will one day have its say, but it will not be the history that Brussels, Paris, Washington, or the UN will teach… Africa will write its own history, and it will be, to the north and to the south of the Sahara, a history of glory and dignity.”

This alternative looks to the resistance of those living in the region, free from the intervention of the West.

The Congo: Plunder and Resistance by David Renton, David Seddon and Leo Zeilig is available from Bookmarks, the socialist bookshop. Go to » www.bookmarks.uk.com 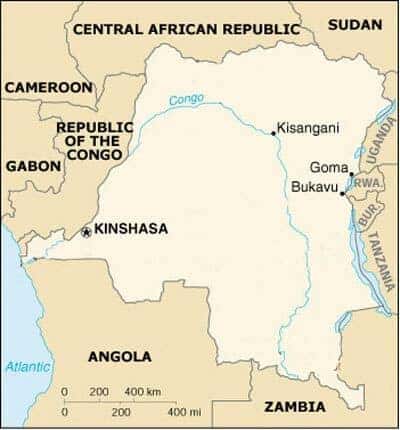 Map of Democratic Republic of Congo