This article is over 17 years, 1 months old
The main campsite for the G8 protesters is in Craigmillar — one of Edinburgh’s poorest areas. Pat Smith explains how she and other local activists won over residents to supporting the protests
Downloading PDF. Please wait...
Sunday 03 July 2005

Craigmillar is the fourth poorest estate in Britain. The council decided to put the G8 campsite there, which provides camping for 15,000 people.

About two weeks ago there was a tenants’ meeting on the estate. Some of the councillors were invited and there were about 80 residents there.

There was anger at the lack of consultation about the site and people at the meeting voted unanimously to oppose it. We didn’t get the sense that there was hostility to us—it was just that they felt no one ever listens to them or consults them.

We started talking to them about the opportunities the G8 protests would give to meet people from across the world fighting over similar issues.

Local residents were enthusiastic and we started getting a great response. In the end they made banner with slogans such as: “Craigmillar says Make Poverty History.” People from the estate have joined the protest.

Jack Burns is a local resident who joined the G8 protest. “At first people living in the area thought that there would be trouble, but it’s been fine,” he said.

“I’ve learned a lot about the issues. The G8 should just wipe out poverty. If people in the Third World don’t have the money, they can’t pay the debts.”

Giovanni Pesce: partisans and liberation from below in 1944-5 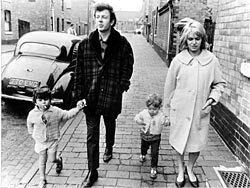