This article is over 19 years, 9 months old
Jock Young is a leading criminologist and head of the Centre for Criminology at Middlesex University. Judy Cox spoke to him about crime and the causes of crime.
Downloading PDF. Please wait...
Saturday 06 April 2002

Is crime going up or down?

It is going down. Crime has been declining for the last ten years. The Home Office produces the British Crime Survey. This shows that crime is going down.

The fall is confirmed by the police’s own statistics. It is the public who identify and report around 95 percent of the crimes recorded in the police statistics. Only 5 percent of the crimes listed are the result of actual detection work by the police. There has been a slight decline in the number of police, but this is nothing like the decline in the number of crimes they have to deal with. This means that their caseload is actually declining.

But they have a very effective lobby that is constantly making the case for why we need more police. The police were a bit worried when David Blunkett was brought in to replace Jack Straw as home secretary. Blunkett had made some speeches about ‘police efficiency’ and how the Met should ‘get its act together’.

The police began to talk about a crisis in all aspects of the criminal justice system, except in their own organisation of course.

Why is there so much hysteria about street crime?

The media’s preposterous howling about street crime is worse than ever. Reputable organisations and individuals who point out the fact that crime is falling are just not being believed. The truth is that only 1.7 percent of all crime is street robbery, and most of that is the theft of mobile phones.

The media focuses on horrific stories of youngsters being shot for their mobiles. But these are a tiny minority of phone thefts. Most of these thefts do not involve violence. Phones are just grabbed or even picked up. This hardly represents a serious crime. Ever since the 1960s crime figures were going up. We were all geared to explaining why crime was continually rising.

But in the last ten years crime has started going down. The right wing always blamed crime on the breakdown of the traditional family. Now they cannot explain how the family can continue to disintegrate but crime can actually fall.

And it is falling everywhere, across Europe and the US. The idea that more police on the beat and ‘zero tolerance’ even for the pettiest of offences reduced crime in New York is an urban myth. Crime fell in towns and cities across the US, whatever the policies and levels of policing were.

The fact that Ken Livingstone, the mayor of London, has jumped on the bandwagon is really disturbing. He has called for London to have the same numbers of police as New York, which is just crazy. Employing extra police is an awful strategy to cut crime. No criminologist thinks more policing really reduces crime.

What do you think of stop and search policies?

The most dominant prejudice in stop and search tactics is that against the young male working class.

So you don’t think Labour’s promises to crack down on crime will achieve anything?

I wrote a paper on the Labour Party’s policies on crime before they were elected to government in 1997. Then Labour talked about the rehabilitation of prisoners and reducing the prison population. They reversed these policies almost immediately after being elected. When Blair made his famous, ‘tough on crime, tough on the causes of crime’ speech, it was in an article called ‘Crime is a Socialist Issue’ in the New Statesman magazine.

The ‘s’ word quickly disappeared from his speeches. Now their being tough on crime means the biggest prison population in the whole of Europe except for Portugal. Being tough on the causes of crime means blaming working class families for the problem.

What looked like it could be a progressive policy has been reversed. New Labour’s statements from before they were elected show they were fully aware that any reforms of policies on crime would meet opposition. Clive Soley was then leader of the parliamentary party. He talked about reducing the prison population, despite opposition.

But David Blunkett met serious opposition from the police lobby and a barrage of criticism from the media. When he finds the party is slipping in the opinion polls he finds it easier to bang the law and order drum. Right now Blunkett is competing for a slice of the Treasury cake in the next budget.

It would be awful if money went to law and order instead of health and education.

Is violent crime on the increase?

Not according to the British Crime Survey – it shows violent crime has also dropped. Violent crime has fallen, but only to the levels it was at in the late 1970s. It is still higher than it was in the 1950s, for example. The homicide rate is up. But that is because the rate is so low that the conviction of a small number of serial killers, like the Wests or Harold Shipman, can distort the statistics.

Gun crime is also up. This kind of crime is very localised. It does not relate to a general increase in the level of violent crime in society. That doesn’t mean it is not a real problem for those mostly working class people who live in areas affected by gun crime.

Working class people suffer most from crime. Theft, for example, has a greater impact on poorer people – those who cannot afford insurance. No socialist should say crime doesn’t matter to the people affected. It just means you have to put it in perspective.

Do you think there are any measures that can reduce crime?

In the end the real problem is the vast and outrageous inequality in our society. London is a city of extraordinary wealth and poverty. If you travelled from Hackney to wealthy areas in west London you probably couldn’t even imagine how people made such fortunes. Crime is a structural problem.

They like talking about the family breaking down, about inadequate individuals and failing families – anything except government policies. Politicians have blamed crime on the breakdown of the family since 1945. The Tories blamed the increase on single parents and the councils giving flats to young mothers.

Labour blame the rise on teenage pregnancies and teenagers out of control. What none of them can explain is why, when marriage rates are down and divorce is up, when the family is falling apart in their terms, crime is actually going down. 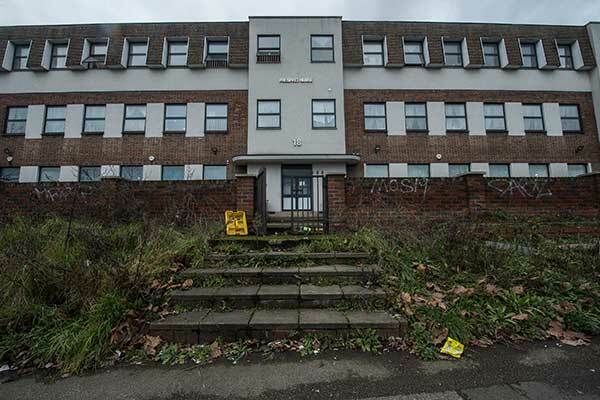 Build resistance to the BNP Nazis