Days of Glory director Rachid Bouchareb: ‘Indigenes were written out of history’

This article is over 14 years, 9 months old
The director of the new film Days of Glory spoke to Socialist Worker about the making of the film
Downloading PDF. Please wait...
Saturday 31 March 2007

‘I started work on Days of Glory five years ago. I chose to film in a realist style because it was the simplest way to do it. For example, there isn’t blood dripping everywhere – it’s not like that.

When you’re hit by a bullet you fall, it’s that simple. And realism can be very strong cinematographically – it doesn’t take away the emotion.

It took a great deal of time to research the history. We tracked down eyewitnesses and war veterans in Africa and France. They told us everything about their time during the Second World War.

I’d met the actors before I wrote the script and they didn’t know much about this history either. They did their own research, discovering members of their families who had fought in the First World War.

There’s almost nothing written about the North African soldiers. At the time those people didn’t know how to write or read, and no one was interested in their stories.

This is because of colonialism – the colonial soldiers are transparent, invisible, they don’t really exist. For over a century France used men from Algeria for its wars – it was an important human reservoir.

The soldiers – known as the indigènes – were used during the First World War, the Second World War and in Indochina – but they were just an object for colonialism.

The Free French army was surrounded by politicians who constantly told the army command that measures were needed to avoid mixing between the French population and the indigènes.

The authorities were worried that returning the indigènes to the colonies would be difficult after they had experienced a totally different life in France.

So there was a tight relationship between the army officers and the politicians – but the movement to liberate France wasn’t something that could be controlled so easily.

I chose to open the film in Sétif because of the uprising there. That uprising will be the subject of the sequel to this film. It will be the second historical part of the story, one which starts in Sétif and finishes at the end of the Algerian war of independence.

Sétif represents the beginning of the war of Algeria – it’s the real turning point. That’s what Algerian leader Ahmed Ben Bella said when he came back from the Second World War.

When he heard about the massacres at Sétif, he understood that no change was possible from within the colonial apparatus. Algerian people lost their illusions in a citizenship that wasn’t coming.

It was the beginning of the Algerian revolution.

Many of the Algerian resistance cadres fought in the Second World War and Indochina. Some came from the French army, while others deserted the army to join the resistance.

They knew the army they were fighting against.

There was a version of the screenplay of Days of Glory that ended with the Sétif uprising. But when it came to editing and after a lot of thought, I decided to end the film just before that point. French society needs time to reflect on its history in order to go forward with its past.

Last year in France there was an attempt to draw up a law to teach the ‘positive aspects’ of colonisation in schools. This attempt failed, but from time to time you do get these kinds of offensive from those nostalgic for French Algeria.

All those people behind right wing terror groups are still alive today and they still play a political role.

We went around France for a whole month with the team. It was great – we played to packed cinemas in every city. It’s rare to have a film team going around for 30 days and being welcomed so warmly.

All kinds of people came to see the film, including lots of young people of North African descent. We also toured North Africa with the film.

People were very happy – everyone has a relative who was involved in the French army.’ 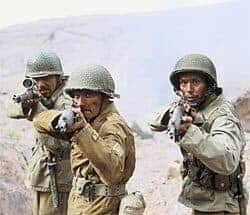 Days of Glory: remembering the forgotten soldiers from North Africa