Days of Glory: remembering the forgotten soldiers from North Africa

This week sees the British release of Days of Glory, a war film that focuses on a hidden fact of the Second World War – the contribution of hundred of thousands of North African soldiers recruited from France’s colonies, known as “indigènes” in French.

It is the first film to depict the motives and experiences of the North Africans who joined General Charles de Gaulle’s army and fought to liberate France from the Nazis. And it has touched a raw nerve in France, sparking huge debates and enraging politicians from Jean-Marie Le Pen’s fascist Front National.

The official history of France celebrates the “Free French” army led by De Gaulle. It downplays how the bulk of the French ruling class collaborated with Hitler once France was occupied by the Nazis in May 1940.

The fact that France was rescued from the Nazis largely by black and brown troops remains a sore point for racists in the country today.

Days of Glory starts in Sétif, Algeria, in 1943 as volunteers for De Gaulle’s army wait to be shipped to the front.

It centres on four “indigènes” from Morocco and Algeria, who have volunteered for a variety of reasons – money, love of France, to escape poverty, to prove that North Africans were equal to the French, or even just a desire for adventure.

They start fighting in Italy before moving on to Provence in the south of France, then up through the mountainous Vosges region in the north west.

Eventually they find themselves alone, defending a village in Alsace-Lorraine – a border region between France and Germany that was annexed by the Nazis.

This is the stuff of conventional Second World War movies – but the twist in Days of Glory is that there is a war within the war.

Even though the indigènes are fighting and dying with their French comrades, the soldiers from the colonies are victims of racism and injustice.

They are served separate meals with smaller food rations. They have less leave from the front than French soldiers.

And they face the constant paranoia of the authorities who are desperate to prevent relationships forming between French women and African soldiers – even to the extent of censoring or blocking mail between them.

Days of Glory’s director Rachid Bouchareb and its co-writer Olivier Lorelle prepared for the film by combing through archive material from the Free French Forces, as well as visiting places in France, Algeria, Morocco and Senegal to meet veterans of the war and their families.

The film was released in France last year and highlighted the scandal of indigènes pensioners.

After liberation, soldiers from the colonies learnt that they would have to do with a lesser war pension than their European counterparts – and from 1959, when the old colonies become independent, the French government decided to freeze their pensions altogether.

Over the years these pensions dwindled to a small fraction of those of other veterans.

The outcry that followed the film’s release eventually pressurised France’s president Jacques Chirac into promising to spend 100 million euros a year to bring the indigènes pensions in line with those of French veterans.

Days of Glory pays homage to all the soldiers from Africa that fought the Nazis and liberated France.

It also comes out at a time when the status of France’s immigrant communities has become an “issue” for all the mainstream political parties – especially following the youth uprising across France’s suburbs in late 2005.

Don’t miss your chance to catch one of the most thought provoking and political war films you’re likely to see.

The myth of French unity

Charles de Gaulle was a little known general who became a junior minister in the French government that surrendered to Hitler in June 1940. He was flown out of France and allowed to broadcast on the BBC as leader of the “Free French”.

In reality this organisation was a motley crew of right wing officers who could rally few troops. The Free French forces fighting alongside British troops in North Africa were predominantly colonial troops.

The British were keen to promote De Gaulle as an ally. They hoped he would support them in a post-war settlement.

As the Allies prepared for D-Day in June 1944, US and British attention focused on the growing resistance to Nazi occupation in France.

The key grouping was the Communist FTP. By October 1943 they could rely on 12,000 fighters across France. Beyond this there were thousands more sympathisers involved in distributing resistance material. They had few arms, however, despite Allied promises.

The Free French leadership had little faith in guerrilla war, preferring to wait for an Allied invasion. In September 1943 a popular uprising on the island of Corsica forced a German withdrawal. De Gaulle flew in, took control from the resistance and sidelined them.

He was helped by the fact that the Communists accepted Joseph Stalin’s orders that they should not oppose De Gaulle, who the Soviet leader hoped would look favourably towards Russian interests.

In June 1944 the Allies urged resistance groups to rise up as the D-Day landings began. Rail workers paralysed the rail network, hampering German movements. As US armies advanced on Paris, the resistance there rose up and took control.

De Gaulle persuaded the US to let his forces spearhead the advance into the city. Once there, he took power, sweeping away the resistance.

Both the resistance forces and French army units loyal to the German occupation were incorporated into a new army. But the resistance units were sent away from the frontline to camps in the French interior. Colonial troops who had fought through North Africa and Italy were also sidelined.

De Gaulle promoted a myth of a French nation united against the Nazi occupation, with the exception of a few “bad apples”. He used the Communists to police the working class and peasants. Once the unrest was contained, he dismissed them from his government.

From war to revolt

While Days of Glory ends in the liberation of France from the Nazis, the story of the indigènes does not stop there.

Sétif, the Algerian city where Days of Glory opens, is also the scene of an event that shattered France’s imperial dreams.

On 8 May 1945, when France was celebrating Germany’s surrender, thousands of Algerians (war veterans among them) gathered in Sétif to place a wreath at the memorial and demonstrate for Algerian independence.

They sung the nationalist anthem, Min Djibalina, and carried placards demanding equality and a free and independent Algeria.

A young man raised the Algerian flag – and was promptly shot down by the authorities. This sparked an Algerian uprising in and around Sétif, coupled with a brutal crackdown by France.

The French deployed their army into Sétif and sent their navy to bomb coastal areas. The crackdown lasted for six weeks, with the army putting down the revolt with the help of settler militias and the Algerian colonial authorities.

The precise number of Algerians killed during the Sétif uprising is still being debated, but it is estimated that over 10,000 Algerians died, compared to around 100 Europeans.

Many war veterans from France’s colonies would go on to fight for their countries’ independence. Among them was Ahmed Ben Bella, a founding member of Algeria’s Front de Libération Nationale (FLN) who would later become the first president of free Algeria.

Meanwhile in France, one man managed to rise through the ranks despite his collaboration with the Nazis. Between 1942 and 1944, Maurice Papon served under the collaborationist Vichy regime and organised the deportation of Jewish people to the Nazi death camps.

In 1958 Papon was promoted to police prefect of Paris. The fight for Algerian independence was raging by that point, and De Gaulle ordered a ban on all FLN meetings in France.

Papon, in particular, was given the green light to use whatever means necessary to prevent FLN members from meeting each other or demonstrating.

He started by ratcheting up immigration and identity controls on the North African community of Paris. Eventually on 5 October 1961 a night curfew was imposed on all the “French Muslims of Algeria” based in Paris.

The FLN responded by calling on all Algerians in the Paris region to join a peaceful demonstration during the curfew on 17 October.

Papon’s response was murderous. He set up detention centres where more than 11,000 Algerians were held for days and beaten to a pulp.

He also ordered the police to break up the demonstration by force, resulting in marchers being beaten and killed by the police.

Witnesses spoke of how the police executed marchers or mutilated them with knives – even throwing people into the river Seine.

The police continued their repression by entering the slums of Nanterre, a western suburb of Paris.

The number of people killed by the police is still not known, but according to Jean-Luc Einaud’s book The Battle of Paris many hundreds were killed. This figure was based on cemetery registers, witness accounts and FLN documents.

The massacre of 17 October 1961 played a key role in Hidden (Caché), an extraordinary film released last year and directed by Michael Haneke.

Justice of sorts finally caught up with Papon in 1998, when he was tried and condemned for complicity with crimes against humanity during the Second World War.

But he was released after less than three years on grounds of ill health and died in February this year.

Days of Glory (Indigènes), directed by Rachid Bouchareb, is released across Britain on Friday of this week 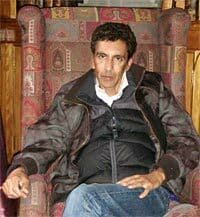 Days of Glory director Rachid Bouchareb: 'Indigenes were written out of history'