Death on the US-Mexico border

This article is over 12 years, 10 months old
The US-Mexico border is one of the most dangerous places in the world for migrants. Jess Hurd visited southern California to talk to those helping the vulnerable
Downloading PDF. Please wait...
Tuesday 03 March 2009

Enrique Morones is the founder of Border Angels, a group of activists helping migrants who make the hazardous journey across the border from Mexico to the US. He is taking crosses to the rows of “John Does” graves.

These are the unnamed migrants who died trying to cross into the US and are now buried in the Holtville cemetery in the Californian desert, the largest unmarked mass graveyard in the US.

“None of these people expected to die when they were crossing the desert, yet this is where they are buried and forgotten by many people,” said Enrique.

“We put crosses up today saying, ‘Not forgotten, never forgotten’ because you have to remember that these people are heroes. They sacrificed everything to feed their families.”

In October 1994 the US government built a 14 mile wall along California’s border with Mexico.

The wall is part of California’s Operation Gatekeeper, initiated by the Clinton administration’s attempt to halt the flow of migrant workers from Latin America. Similar walls have sprung up in Texas and Arizona.

Each state built a stretch of the wall. The US is now considering expanding the wall as part of a network stretching over one thousand miles.

The California wall has blocked one of the few relatively safe routes into the US – a 20 mile journey from the Mexican border town of Tijuana to San Diego.

Now desperate migrants cross through the desert in an attempt to go round the barrier.

The graveyard at Holtville holds the remains of the many who got lost or were abandoned by smugglers. Many perished in the cruel desert heat.

“Operation Gatekeeper has meant a wall of death and a wall of shame,” Enrique said.

“I am a Mexican who was born and raised in San Diego. I started taking food and water to the illegal migrant communities who live in the canyons.

“These men, women and children come to the US and work for low wages picking fruit and vegetables.

“We launched Border Angels that set out to help the migrants. Now we go out to the desert to help track those who are lost and in danger.”

Lucressia Du Mingues died as she attempted to join her husband in the US. A smuggler abandoned her in the desert.

She crossed with her two children but they ran out of water and she died. The children were picked up by the US border patrol and sent back to Mexico.

“Lucressia’s grandfather went into the desert to try and find her remains,” Enrique said. “He found the body of a woman, but it wasn’t her. And then he found another woman, and another. Eventually he recognised the ring on a finger of his daughter’s skeletal remains.

“We estimate that more than 5,000 people have died trying to cross into the US. It is horrific that these deaths are taking place every day and in a country that likes to tout itself as the human rights leader in the world.”

Even with the wall the number of people coming into the US has not slowed. Enrique said, “The Democrat senator Ted Kennedy said, ‘Show me a 50 foot wall and I’ll show you a 51 foot ladder’. These people are coming to the US looking for opportunities.

“This country has a statue at the harbour of New York which says ‘Give me your tired, your poor, your huddled masses’ – well it doesn’t honour that spirit any more.

“Now your tired, your poor, your huddled masses are in the graves here in Holtville.

“Those people should be allowed to come into the country to work. That’s why the forefathers of the senators of this country came – looking for economic opportunities and religious freedom.

“It is the same thing today, but why are they keeping people out? Because they fear the unknown. The Latinos are not from the Anglo-Protestant background of the early settlers.”

Enrique blames a right wing vigilante group known as the Minutemen which patrols the border turning back or arresting migrants.

The Minutemen – named after guerrilla fighters during the American war of independence – were formed in April 2005.

Enrique said, “They use names that are patriotic to disguise the fact they are a hate group. Initially they said that they were patrolling and defending the border from Al Qaida.

“But there are three documented cases of people convicted of attempting to commit terrorist acts crossing the Canadian border but none on the US-Mexican border.

“The Minutemen are a racist movement against Latinos, and Mexicans in particular. They wrap themselves up in the US flag and say they are driven by ‘patriotism’. But they are using the politics of fear, lies and deception.”

I met a group of armed vigilantes known as the Mountain Minutemen at Camp Vigilance, one of their desert lookout posts along the border.

Some were sitting by their caravans. Others were dressed in camouflage with their faces masked, peering into the darkness through night vision goggles.

The vigilantes say that they do not approach or confront any of the migrants, but alert the US border patrol when they spot a group attempting to cross.

One of the leaders of the gang, Robert “Lil Dog” Crooks, has been exposed for faking a video of the Minutemen shooting a migrant dead.

The video caused alarm among US human rights groups and Latinos about the intentions of the group.

Enrique, and other campaigners, said the vigilantes have fired at people.

“We need to shut these groups down and take away their guns,” he said.

Enrique explained that the Minutemen have been sabotaging aid stations set up to help migrants in distress.

“We saw this when we were out distributing water on the border this week. It was the first time we saw every one of our stations sabotaged. They put a knife through the water gallon containers.

“They are getting more desperate and more violent.” 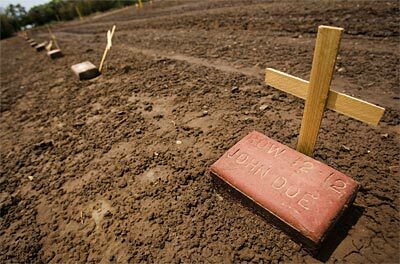