Debating Chavez: Pirates of the Caribbean

Not for the first time, Venezuelan president Hugo Chavez spoke for many people around the world when he called George Bush “the devil” in a recent speech to the United Nations. As it turned out, it echoed the feelings of many US voters, as the recent election there has shown. And despite a barrage of propaganda from the right, it seems likely that Chavez will be re-elected to the Venezuelan presidency on 4 December.

Since he came to power in 1998, the two thirds of Venezuela’s population who live on or below the poverty line have, for the first time, begun to benefit from the country’s oil wealth. The new schools and universities, several thousand new health centres, and a programme for redistributing unused land, have improved the lives of the very poor.

In Bolivia the election of Evo Morales as president in 2005 was in many ways even more significant. Morales was carried to power by a mass movement, born in the city of Cochabamba in 1999 during a struggle that reversed a plan to privatise water supplies. Morales’s promise to nationalise Bolivia’s oil and gas reserves seemed to echo Chavez’s policies in Venezuela.

Both processes have opened new avenues for the future of the region – but the route is not easy and some of the contradictions are already visible.

As the months have worn on, it has become obvious that Morales is already looking for a middle road, a way of working with multinational companies that will place obstacles in the way of any deeper social transformation. And in Venezuela, while the grassroots organise to carry forward the revolution, there are many within the government who would happily divert it.

These are the questions that the left needs to explore and debate. Sadly, Tariq Ali’s new book, Pirates of the Caribbean (Verso, £14.99), falls short of this task.

It is an odd little volume, starting with its title – after all, Bolivia is a landlocked country over 1,000 miles from the Caribbean! The cover design just adds to the confusion. Chavez and Morales are pictured beside Cuban leader Fidel Castro, who is wearing a halo.

Yet in his account of a visit to Havana, Tariq is honest enough to recognise that Castro’s regime has been repressive – of dissent, lesbians and gays, and freedom of expression.

More surprising still is that a writer of Tariq’s political experience does not ask whether a revolutionary leader should remain in power for 47 years, without any democratic mandate. (True, he did temporarily cede control to his brother, Raul, who has also held his post for 47 years.)

Did we learn nothing from the collapse of the Eastern European regimes? Tariq does ask at one point “why Fidel has not yet retired”. His answer? “The battle’s not yet won.”

In fact there is very little analysis to be found here at all. The book seems to be a kind of memoir with the aim of settling some personal scores. Long footnotes attack people who will leave very little mark on history. A lengthy appendix critiques Teodoro Petkoff, the ex-guerrilla turned vicious anti-Chavista.

But he will be virtually unknown to most of the new generation of people attracted and inspired by events in Venezuela and Bolivia. The question they are asking is how these processes can be developed and deepened, and what role we, as active socialists elsewhere in the world, can play in that process.

In each chapter, that is precisely the point where Tariq stops. The “Bolivarian Revolution” unfolding in Venezuela and the rising of the Bolivian masses have changed the face of Latin America.

But the reason for that was not simply the election of presidents with popular support or a more defiantly anti-imperialist rhetoric. President Lula in Brazil shared some of that rhetoric, but shrugged it off as soon as he tried on his first Armani suit and joined the club of globalisers.

Daniel Ortega, Nicaragua’s new president elect, was once a radical, but is certain to betray the hope of those who elected him (see below).

What changed the face of the planet as the 21st century began was the entry onto the stage of history of the peasants, indigenous communities, the students, urban poor and the organised working class in these countries.

It was they who stopped the right wing coup attempt that sought to overthrow Chavez, they transformed the Bolivian state. In Cuba, too, the choice we face is not the tired formula of Fidel or the Miami mafia – there too it is the mass movement of workers that will change and shape the future.

For those who want to understand the tensions and forces that will shape the Latin American revolution, Richard Gott’s thoughtful and informed analyses of both Cuba and Venezuela are powerful weapons, while James Crabtree explores the patterns of protest in Bolivia.

It was Augusto Sandino, who led the anti-imperialist struggle in Nicaragua in the 1930s, who said, “Only the workers and peasants will see the struggle through to its end.” In the 70 years since he was murdered by the dictator General Somoza, we have learned that lesson over and over again. 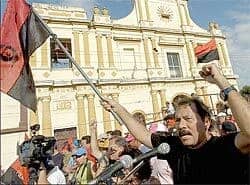